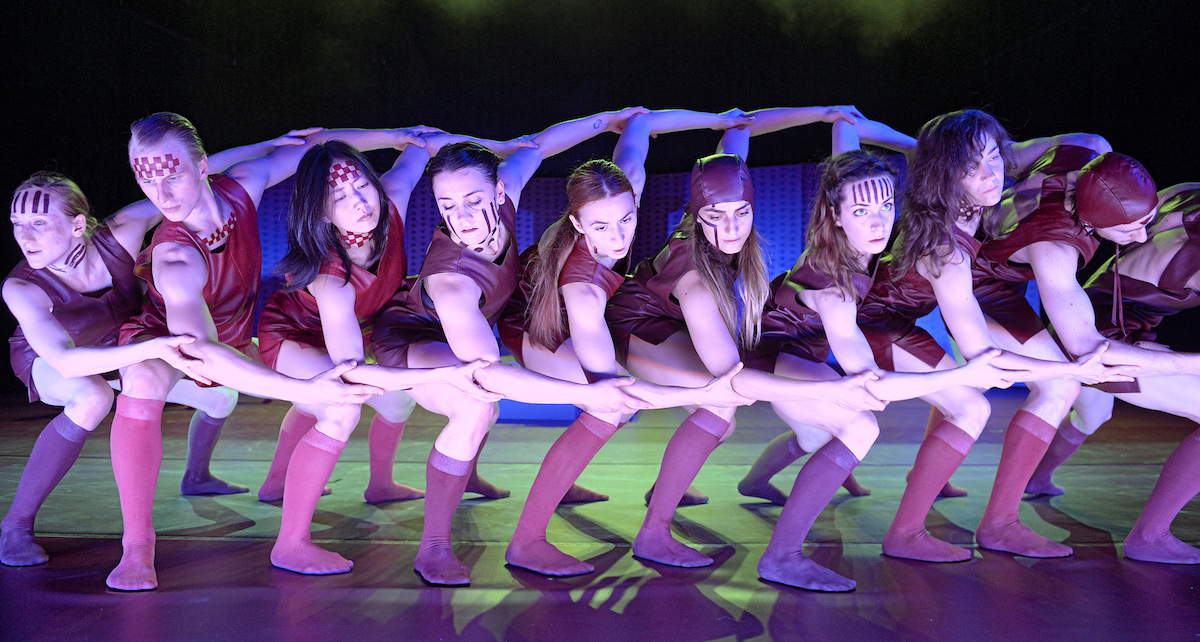 I’ve always been impressed by the sheer physicality of Australian Dance Theatre (ADT). I remember hearing someone in the foyer after a performance of Garry Stewart’s Devolution describe it as “dance as an impact sport”, which I thought was an incredibly apt observation.

Then, a few years ago at the National Dance Forum, I heard Stewart speak about the thinking and process behind his work, and I was fascinated. Here is a choreographer who creates dance works that are extremely physical and virtuosic, yet the concepts that drive the thinking behind his works is highly intellectual. I was surprised, and enthralled. I was curious as to how he took these cerebral ideas and transformed them into a performance art that appears highly corporeal and primarily relies on movement, rather than words, to communicate the ideas.

So it was with great pleasure that I had my first opportunity to interview Stewart this month about his latest work, Objekt.

A fascination with objects 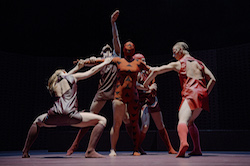 Stewart has been exploring ideas about objects and objectification for some time. He traces the roots of Objekt back to 2002, when he created The Age of Unbeauty, inspired by the 9/11 terrorist attack on the World Trade Centre. The Age of Unbeauty was about man’s inhumanity to man. Following this, he created Worldhood for AC Arts, which centered on how humans treat each other as objects.

“In Objekt, I’m really picking up the threads of those two works and synthesising them in a way that is directly related to the human body as an object,” Stewart explains. “It begins by depicting the human body as an artistic, almost sculptural, object, and then shifts into exploring the sociological and political context where people see others as an object. When you see someone as an object, you don’t have to empathise with them and can treat them as you want. So the work moves into notions of subjugation and brutality.”

Stewart’s fascination with objects has permeated much of his recent work. The last work ADT presented in Adelaide was Habitus, which focused on our relationship with domestic objects. But, as Stewart explains, Habitus was focused on utilitarian objects that we use and was framed within the problem of consumerism, whereas Objekt focuses on objectification and dehumanisation of people.

“I think it is a subset of Habitus in some ways, but the objects are not domestic utilitarian objects in Objekt,” he says. “It’s a more abstract and depersonalised depiction of objects – objects as a sculpture – something three-dimensional that can be viewed, that interrupts the architecture but has no function or use.”

The self, identity and perception 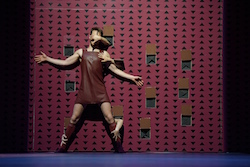 While Stewart traces his interest in objectification back to The Age of Unbeauty, he also notes the contribution of his interest in the idea of “self” on the work, which he traces back to his 2010 work Be Yourself. Stewart had been studying Buddhist meditation for some time, and then they had a Buddhist practitioner come into ADT to take the dancers through a meditation practice once a week.

“A lot of the discussion we had with the teacher centered around the notion of deconstructing the self, and questioning what is ‘I’, ‘me’, ‘self’?” Stewart explains. “When we look deeply at that is there an inherent thing that constitutes what the ‘I’ is. So that’s where it began and was the impetus for making the work Be Yourself.”

Stewart continued his exploration of the “self” in Proximity, which started as an interest in the neurology of perception. He was interested in the work of Maurice Merleau-Ponty, a French philosopher interested in phenomenology, which is the study of how we experience phenomena or things.

“We perceive that we perceive through our eyes, but the body maps and perceives the world as a total entity,” Stewart says. “The brain is not separate to the rest of the body, and the body is somehow smeared with brain and thinking and conceptualisation.”

He notes that these philosophical musings are somewhat challenging to turn into dance. “It’s a challenge for me as a choreographer. On the one hand, I am fascinated with movement and with a certain kind of kinaesthetic energy. But then one of my other interests is these conceptual ideas. The ongoing challenge is how to draw these different threads, which seem to sometimes work against each other, together.” 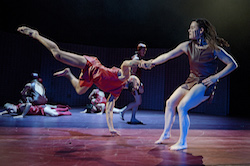 Objekt was created in Germany during a residency Stewart undertook with Tanzmainz, the contemporary dance company of Staatstheatre Mainz. Stewart has gotten to know Tanzmainz Director Honne Dohrmann as a result of ADT’s extensive touring of Europe. They’d been speaking for some time about Stewart creating a work for the company, and Objekt appeared to be the right work.

The work was developed in a very different way to how Stewart creates work with ADT.

“It’s a different kind of cultural tradition” he notes. “The German system was set up in the late 1700s.  Each theatre has an opera, orchestra, dance company, theatre company and choir. They do hundreds and hundreds of performances each year.”

He continues, “I was there for about seven weeks, which sounds like a reasonable time frame, but you don’t have all the dancers at the same time, so it’s like making a patchwork quilt. On the days when I’d have the whole cast, I’d focus on bringing them all together and trying to create a cohesive flow of ideas. It’s an interesting exercise as a choreographer to hone your skills under that restriction. Not all the time, but occasionally. At ADT, we have a much longer rehearsal period and a task-based work process where the dancers are incorporated into the flow of the creation of the movement and the ideas, so there is a sense of co-authorship.”

“But in the German state theatre, it was almost impossible, so I had to go in and start choreographing without the exploration. Also, working with a different vocabulary, as they don’t train the same way ADT dancers do, so it was great to work with what they offer. It was also based around what my body does, as I was producing the movement instead of the dancers. “

The time restrictions extended well beyond the creation of movement.

“We’d bump in one day, then have to bump it out again because there is another show in the evening,” Stewart recalls. “You have to be really organised, but what you do get is phenomenal support, particularly technical support. I had two rehearsal directors, and there is a department for everything – metal work, wood work, makeup, millinery departments. Whatever you ask for you have it in the studio in a couple of days. That was great for me, as the work is quite design oriented. It’s not a massive work, but there is more consideration to design than many of my other pieces.” 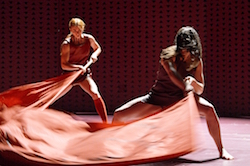 On the plus side, Stewart enjoyed the different way of working, even though there was less time for exploration and task-based choreography.

“I did the set design and all of the choreography, at least 90 percent,” he says, “so I felt it was a work that really emanated out of me, especially the choreographic material. I usually work in a task-based relationship where the dancers manufacture the choreography as well. The design has a very distinct presence, and that is something that I’ve had an increasing interest in over the years.”

Translation from German to Australian

Of course, in Australia, we’ll be seeing the work performed by dancers of ADT. Stewart notes that he hadn’t altered the choreography at all for the Australian version, and hasn’t tried to turn it into an ADT piece, although he has made some adjustments in things he wanted to improve.

“I think the dancers have enjoyed the challenge. When my dancers perform it, they perform it differently to the German company because of their training. There is a certain robustness that is hard wired into the ADT dancers through their training, but Objekt probably looks different to some of my other works.”

Combining experience and the enthusiasm of youth

The October season of Objekt will see the return of Lina Limosani, who danced with ADT from the beginning of Stewart’s second year at ADT. Limosani’s 30-minute work, One’s Wicked Ways, was presented in ADT’s recent Ignition season.

“She is formidable and tenacious and danced with ADT for a number of years and has since gone on to develop her own choreographic voice,” Stewart says. “Her dancing practice is still intact, and she has very regular yoga practice, which has kept her body incredibly agile and strong. I’d been watching her in rehearsals for Ignition, and she’s been dancing like she always has. She is just so strong and has come back with maturity and experience, which is great to have in the room. Some of our dancers are a bit younger, and they need that example. Lina is early 40s but just phenomenal. She has great skills and deep understanding of the work and the process, and how to be in the room as well, and how to contribute, so it’s been great having her back. “

At the other end of the experience spectrum, Objekt will feature three second-year students from AC Arts – Zoe Gay, Connor Gibson and Felicity Boyd.

Objekt premieres on October 5th, and runs until October 8th at Main Theatre, Adelaide College of the Arts, Light Square, Adelaide.  Tickets can be purchased through TryBooking. You can view a trailer of the German performance of Objekt here.