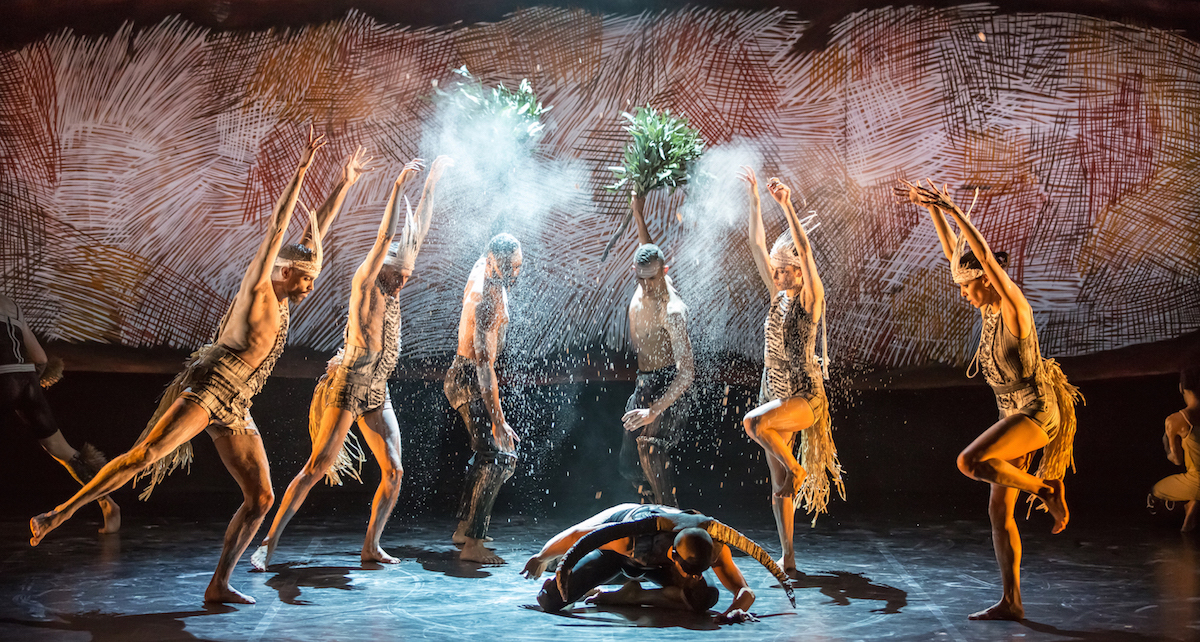 The era of instant global communication, like most mass consumption cultural phenomena, has its benefits, its costs and its sometimes surprising fall out. The age of the “share” has not only unleashed a torrent of idiotic Facebook memes but seriously blurred the parameters and diluted the power of copyright. Once obscure works and distinct cultural practises have become the fodder of worldwide appropriation, whether as political stance, fashion statement or direct creative inspiration.

For First Nation peoples around the world, this has been a particular problem, as cherished and richly contextualised socio/cultural dance, song, story and myth are airlifted out of their original settings and used by others for commercial or reputational gain. Here in Australia, indigenous groups around the country have been struggling to maintain their identity not only against the onslaught of imported Western culture but the incremental leeching of their historic societal artforms and knowledge.

As of August 1, 2016, however, a new state law in Victoria will extend indigenous “cultural IP” beyond the usual bounds of copyright and into the protection of “intangible” assets. These intangibles include knowledge, stories and ceremonies not already widely known — for example, environmental knowledge, crafts and, significantly, songs and dances.

For the dance industry, this new provision in the Aboriginal Heritage Act is particularly salient, since it is indigenous dance that is frequently the most visible cultural asset of Australia’s first peoples.

According to the Associate Dean of the Willin Centre at the Victorian College of Arts, Richard Frankland, the recent amendments to the Act are just part of a broader movement toward potential cultural equity. “There are a lot of gaps that we need to address, and this is possibly just one rung on the ladder,” he says. “You know, what do we need to do to build a bridge across the cultural abyss that we face, and is this Bill a part of that bridge? I think that these are questions for all Australians.”

Indeed, for Frankland, the specific question of “cultural IP” is inextricable from the bigger, systemic issues confronting both indigenous and non-indigenous Australians. “Why is it more likely for a young aboriginal man to go to gaol than it is for them to go university?” he wonders aloud. “So, can culture be a saving grace? Because we can’t just keep blaming the victim, we need to point the finger at what’s causing that, and if it is cultural deprivation, then we need this Bill and many things like it.”

Sitting at the sharp end of dance and its relationship with cultural assets, the nation’s flagship indigenous arts company, Bangarra Dance Theatre, has a proud history of being sensitive to issues around ownership and appropriation. As its Executive Director Phillipe Magid declares, “We already have a very strong indigenous cultural intellectual property policy that we put in place a couple of years ago; and that was really just a formalisation of the very structured approach that we take to creating our work.”

Across its 27-year existence, and especially under the creative direction of Stephen Page, Bangarra has placed itself in the vanguard of indigenous cultural momentum. “Our work is a direct result of the great relationships that we have with communities across Australia,” Magid explains. “So, I think this law reinforces that approach and definitely puts in place some structure for those that may not have these sorts of policies.”

Whilst naysayers may argue that the amended Act extends a level of IP protection to indigenous people that is not available to others (most notably, the idea that “intangibles” can be considered property in this context), both Magid and Frankland argue strongly from the viewpoint of cultural practises being about the very survival of community.

Meanwhile, Frankland cites prominent aboriginal child protection advocate Muriel Bamblett on the link between the practise of culture and the viability of community. “She speaks about the fact that we all need culture,” he points out. “You know, everyone’s got culture. Everyone. But it’s that we need it that’s so important; because without it, we’re like a bit of flotsam and jetsam in the ocean. We float around and we’re lost.”

From the dance perspective, the issue is very clear to Magid of Bangarra. “I think that the reason that Bangarra are seen as the only major indigenous arts company is that we have always respected culture, whether it be song or dance or kinship structures,” he states.

Beneath the fine points, however, the new provisions of the Act mean that dance practitioners in Victoria (or those wishing to bring productions to Victoria) cannot simply appropriate aboriginal stories and knowledge without consent. Penalties for breaches extend up to $1.5m for companies and $280k for individuals.

Whereas some might say that this represents an over-reach and indeed an unhelpful injection of political correctness into the creative space, Frankland sees it as positive recognition. “We’re hitting a level of knowledge where people are saying, ‘Hold on, we’ve been socially engineered to have a perception about aboriginal and Torres Strait Islanders that’s not necessarily true’. So, people are asking who were we, who are we and, more importantly, where are we going? Perhaps this Bill can be a light in that direction.”

Perhaps at the core of the argument here is the notion of respect. The question for dance makers is how does that respect manifest? And where, in the blur, is the line between creative freedom and colonial theft?