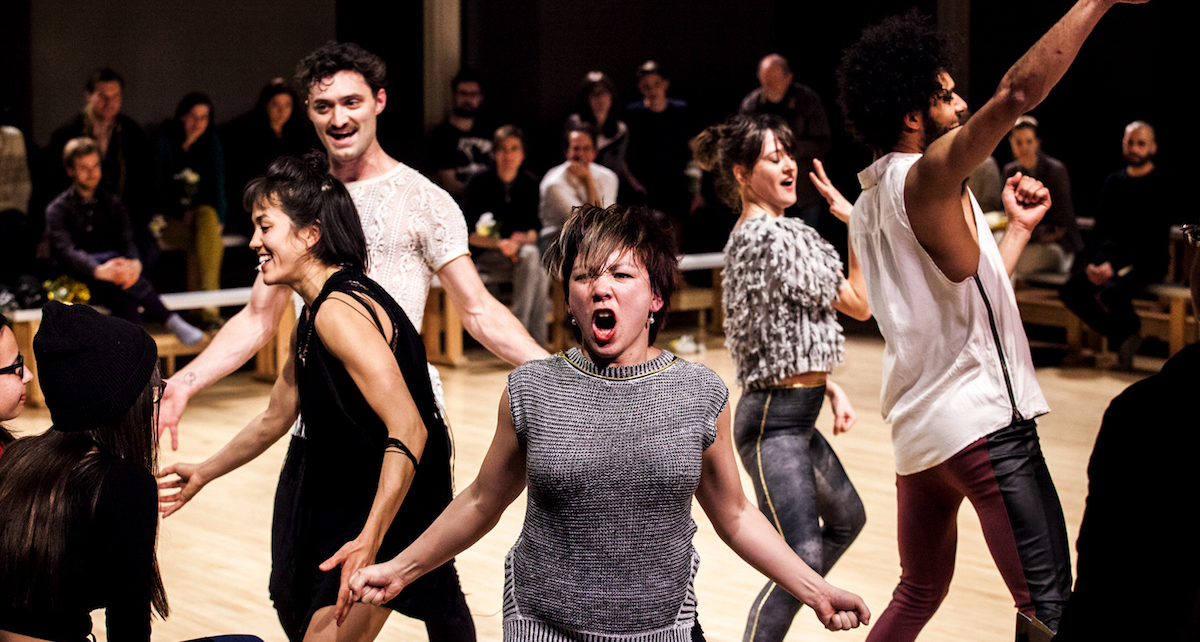 When she brings the first of her Thank You For Coming trilogy to the Melbourne Festival in October, she will be furthering her theatrical investigation of the self in society; or, as she likes to put it, the idea of “somebody in a world of somebodies”.

“I am intrigued by who we are in a kind of constant relationship to the other,” she states upfront. “For myself, there are all these small ways I’m a different person around the guy I go to the deli with versus my mother or a good friend or just someone on the street. I notice all these little changes in my voice, in my body and in literally who is able to emerge.”

That Driscoll chooses to examine this idea in the very social context of dance and physical theatre is no mere coincidence. “I feel that there’s a kind of catharsis that happens when it’s fully heightened and brought out in theatre or in some kind of live ritual,” she explains. “A lot of what I do is taking a micro gesture or a little change in the voice and blowing it up. There is something interesting in bringing something out and making it extreme.” 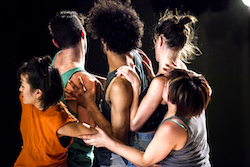 Faye Driscoll’s ‘Thank You For Coming’. Photo by Maria Baranova.

As a mode of communal spectacle and group ceremony, the entirety of the live performance experience is all part of the Faye Driscoll oeuvre. “In any performance, the charge in the space between the witness and the performer, that’s what the performance is,” she elaborates. “Neither lives without the other. Throughout Thank You For Coming, I think of it almost like a character that I’m trying to animate.”

In Melbourne, that animation will be of five bodies conjoining and moulding and forming into new bodies and organisms. Even new ideas. New selves. Performed in the round and partly “created live”, this first iteration of Thank You For Coming, called Attendance, was initially rehearsed in front of invited audiences, and so in its very conceptualisation and development it was a socially informed construction. Indeed, Driscoll is endeavouring to take the now tired idea of “audience participation” to much richer analytical and artistic terrain.

According to Driscoll, it’s also an explosion of blurred performer/spectator lines. “In the context of Thank You For Coming, I think of it really as a kind of pre-supposition because in fact the lines already are blurred, but I’m just going to make it more so. I thought about the idea of a show, where you expect a stage and you expect a ticket and a spectacle, so with this I’m tweaking it in a kind of subtle way where you end up with a kind of immersion.”

It’s a motif she has explored across much of her back catalogue, from her 2008 Bessie winning 837 Venice Boulevard right up to the new work she was rehearsing when Dance Informa spoke with her. In the Driscoll frame, however, “immersion” is a far more subtle device than the hip media release spiel would have you think. As she says, “I like to think of the performance body as a kind of drum, so that when you look at it for 20 minutes moving in a certain way, it affects your body.”

In her practise, she likes to prise apart received ideas about how to make performance, especially around the various fiefdoms and hierarchies that typify the creative industries. “When I begin making work as a choreographer, I simultaneously begin thinking about choreographing for stage, or as a theatre director,” she reveals. “You know, when I start thinking about my own voice I like to push outside of what is my own precious aesthetic. So I think in a little bit of an irreverent way about what is allowed.”

For herself, this means going out on a limb. “My gauge right now is what is making me a little bit on the edge of trembling, almost to the point of feeling that I’m not gonna pull it off,” she states. “If in some way when it’s happening I’m also delighted and I think that other people might also be challenged and delighted, then I think I’m doing my job.”

Thank You For Coming: Attendance is a ritualistic, sometimes chaotic, sometimes technically exact work that embraces dance, theatre and public ceremony. Although this has a high concept ring to it, there remains the hardcore dance reality of the human body; yet even this Faye Driscoll dares to playfully subvert. Taking into account the reality of the live ritual, which bursts from the stage to encompass both the audience and the auditorium, she quips, “For me, the site is really the body.”

Faye Driscoll’s Thank You For Coming: Attendance will be presented as part of the Melbourne Festival, October 7-10. For tickets and more information, click here.