Ballet is renowned for being hard work. All that grace and athleticism comes at a price; but there are some companies that take it even further. Case in (and on) point(e): Moscow Ballet La Classique.

Established in the twilight of the Soviet era, the company is celebrating its quarter century with yet another grueling tour. Indeed, their latest antipodean jaunt will see them perform in no fewer than 28 venues in 35 days, from Cairns to Perth and multiple points between. It is perhaps no small irony that the production behind this exhausting schedule is Sleeping Beauty.

No surprise too that when we speak, the company’s founding Artistic Director Elik Malikov has just got back to his hotel room in Bournemouth, England having just watched the curtain drop on yet another performance of Tchaikovsky’s much loved classic. 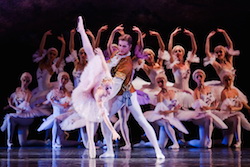 “I agree, the schedule is quite tough,” he concedes with a hint of a chuckle, “but we have to remember that ballet dancers retire earlier than others, usually at 33 to 35 because the profession demands physical exhaustion.”

Aside from testing the fitness of his dancers, Moscow Ballet’s rolling schedule means that the production itself also needs to live out of a suitcase. With fifty cast and crew and the necessarily lavish styling that Sleeping Beauty calls for, the logistics are impressive. “Sleeping Beauty does demand a lot of clothes,” Malikov says, “because the story covers two epochs. After all, the princess sleeps for a hundred years. So, this production has about two hundred costumes; shoes, accessories and outfits. We also use mostly backcloths for the set, so the decorations are soft. Also, we don’t use a lot of furniture because the stage is best left empty for the dancers.”

Of course, the company is only able to tour to destinations as diverse as Bournemouth, Townsville, Lismore, Frankston, Mandurah and Adelaide because of the enduring popularity of both Russian ballet and Sleeping Beauty in particular. As Elik Malikov observes, “The Tchaikovsky ballets [Sleeping Beauty, Swan Lake, Nutcracker] are the core of classical ballet and with our company I know that the most demanded ballets by the audiences are the three great Tchaikovsky ballets. So, it happened historically. People just like them.”

However, for all the tutu fairytale pomp of the ballet, the history of Princess Aurora and her somnolent century is far more bloody than a mere pinprick. Versions of the story date back to the 1300s and Frenchman Charles Perrault’s 1697 iteration, La Belle au bois dormant laid the foundations for the Brothers Grimm Dornröschen. Yet, when the Imperial Theatre in St Petersburg commissioned Tchaikovsky and choreographer Marius Petipa to create a ballet version, the viper infested cannibalism of the story’s second half was dropped and when Spyashchaya Krasavitsa premiered in 1890 it climaxed with the famous kiss. 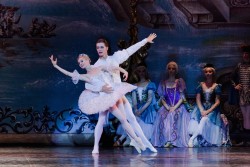 The cultural/historical context of the ballet’s creation, a desperately poor Czarist Russia being left behind by the rapidly industrialising nations of Western Europe, is not lost on the Moscow Ballet’s Artistic Director. Just as it does today, Russia takes an immense pride in its classical ballet repertoire, and particularly the Tchaikovsky/Petipa troika. “It was maybe the greatest team Russia ever had,” Malikov notes.

Since then Russia and the world has changed beyond the imagining of those two greats but their ballet remains largely intact. “At the time when Tchaikovsky and Petipa made the ballet there were no other entertainments beside theatre, so people came to the opera or the ballet and spent the whole day there,” Malikov explains. “For example, they would watch Sleeping Beauty and Swan Lake and that would cover about five hours. Over time the production has been gradually cut, so that even productions at Bolshoi and Mariinsky, which are regarded as the originals, are a little bit pressed. But in this production the main melody of the music and ideas of the choreography are preserved.”

No mean feat for a company that performs almost daily at its home base in Moscow and at points around the globe. In fact, it’s fair to say that Elik Malikov & Co will not be sleeping any time soon.

For tour dates and venues, and to purchase tickets for Sleeping Beauty by Moscow Ballet ‘La Classique’, click here.