Born in Perth, Eastoe graduated from the Australian Ballet School and joined The Australian Ballet in 1997 where she steadily climbed the ranks due to her fearless technique, heartfelt performances, versatility and vivacious personality. The Company’s Artistic Director, David McAllister said that she will be sadly missed by audiences and colleagues alike. “Her legacy is that people will have such vivid memories of her incredibly emotional performances. As a dancer, she completely inhabits every character she portrays.” 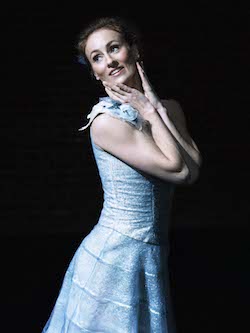 When you started dancing as a child, did you ever think that you would have such a long and successful career?

“I definitely didn’t dream that far ahead to imagine the length of my career as a six year old… I joined the company in 1997 and was very fortunate to have some opportunities early on.   I remember filling in for a soloist and getting my first big break dancing Tchaikovsky Pas De Deux with David McAllister. He taught me so much in terms of stagecraft and bringing the joy of dance to the stage. I’ve had a fairly smooth climb through the ranks since those early days and have loved travelling throughout Australia and the world performing with this unique and spirited company.”

You appear to be at your peak both technically and artistically.  Was it difficult to make the decision to retire?

“Making the decision to retire has been easy and hard for various reasons. My family has become a huge focus in my life and I am very grateful to have had these years performing since the birth of our daughter Ella. I no longer wish to sacrifice the growing up time I share with her and feel it is the right time to hang up my pointe shoes. I will be incredibly sad to let go of this dance life but have so many wonderful memories to look back on.”

What have been your top three highlights during your career?

“It’s so hard to pin point…

Working with Stephen Baynes one on one in the studio. So many cherished rehearsals developing the subtlest of detail to bring out the mood of the music, usually with Andy (Andrew) Killian.

Debut Giselle in 2006 with Cedric Ygnace being promoted to Principal on stage.

Swan Lake LA opening night 2014. An incredible buzz from the audience. Dancing this ballet, developing a chemistry with Kevin Jackson even deeper than before and knowing it was my last overseas tour.” 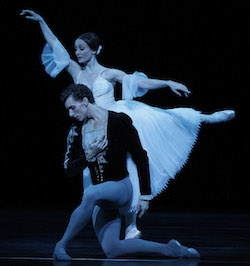 What are you going to do on your first day of retirement?

“Organise a birthday party for my husband Tim Harbour.”

“It may sound a little disgusting but I will not miss the pain from ‘soft corns’ in between my toes! Awful stinging and at times agonising pain!! I will miss the connections between colleagues and shared magic moments on stage, being able to be a character and tell stories.”

If you didn’t make it as a dancer, what career path do you think you would have taken?

“I’d love to have been a “ball girl” and then maybe a fabulous tennis player.”

Make sure to see Madeleine Eastoe is The Dream or Giselle before her retirement. Her very last performance will be in Giselle at Adelaide Festival Centre on Monday July 6, 2015.