Christi and Chloe Lukasiak are the dynamic mother-daughter duo from Dance Moms who quickly became fan favourites thanks to Christi’s hilarious wit and Chloe’s heartfelt dance performances. Week after week, season after season, audiences saw Chloe weather insults from teacher Abby Lee Miller with grace and maturity, and we watched in admiration as she didn’t let Abby steal her love for dance. We were equally enthralled by Christi’s determination to ensure her daughter was treated fairly and given the same opportunities as Maddie and the other girls, whether that meant fighting with Abby and the other dance moms or ultimately leaving the show and the Abby Lee Dance Company.

Since Christi and Chloe’s departure from Dance Moms, audiences have missed Christi’s epic one-liners to Cathy and her Crabby Apples, her antics with best friend Kelly, and the way she called Abby to task on her favouritism and bullying. Chloe’s absence has meant that Abby has unsuccessfully sought a replacement for the ALDC but as it turns out, not everyone is replaceable after all. 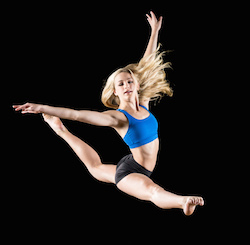 Chloe Lukasiak comes to Australian and New Zealand in the Sequins and Secrets Tour! Photo courtesy of Christi Lukasiak.

Chloe now dances at Studio 19 in Pennsylvania, is the face of Just for Kix and the brand’s “Nobody Is You” Campaign and she travels the world with her mother performing and meeting fans. In July, Australia and New Zealand will welcome Christi and Chloe back down under where they will present their Sequins and Secrets Tour.

Dance Informa spoke with Christi on a Tuesday evening when she was at home with her five-year-old daughter Clara while Chloe was at dance class.

“After so many years being on the road with crazy schedules, I’m really enjoying just being at home with Clara and taking her to kindergarten”, Christi said. “Chloe was always very easy but Clara is a handful. Chloe is like her dad and Clara is like me.”

When asked how Chloe is getting on at Studio 19, Christi said “she loves it. It has been the best thing we’ve done in a long time for her.” As for competitions, Chloe still competes but it was discussed at length between Chloe and her parents as to whether or not Chloe would continue to compete. “The studio asked her multiple times whether she would compete and finally we decided to just let her do some of the group dances. She also has a duet with one of the other students but we decided that we weren’t going to let her do solos. We kind of felt like she has had so many opportunities that other kids haven’t had and we didn’t think it was fair for her to compete in solos. Whether it was fair to her or to the other kids or even just taking attention away from other kids in her studio. She has so many opportunities to do things that we agreed that she doesn’t really need to do a solo. Every once in a while Chloe will say ‘oh I wish I had done that’ but then she thinks about it and she’s like ‘no, I don’t really need to do it.”

This is one of the most enduring traits about Christi and Chloe. Rather than being attention seeking or hungry for fame, they are just regular people who believe that everyone should have the same opportunities.

As for whether Chloe has to compete against the ALDC dancers? “Her new studio and ALDC very rarely go up against one another. They tend to do different competitions. Studio 19 used to compete against ALDC while Chloe was still there which I mentioned to Jill because Kendall was originally from Studio 19.” 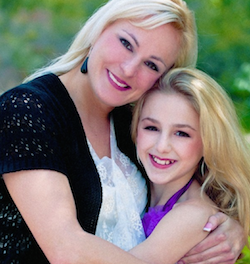 Christi and Chloe Lukasiak of the Sequins and Secrets tour.

Christi and Chloe’s Australian and New Zealand Tour includes Masterclasses for dancers of all ages and abilities, meet and greets and of course, performances by Chloe.   Christi says that she will be spilling a few secrets on the tour because “I’ve lived the experience of being on Dance Moms and I have a different perspective from what the audience does. I’ve always been very open and honest about things and I will certainly do that on this tour.”

“Whether it is on TV or I’m sitting in the audience, my favourite thing in the whole world is to watch my daughter dance”, Christi says. “So there will definitely be lots of dancing from Chloe.” Each event size will be kept to a manageable level so that each participant can walk away from the experience feeling like they received individual attention and were able to interact with Christi and Chloe.

Despite Chloe’s fame, all her success and the attention she receives, Christi says that they both remained completely unaffected by it. She has to remind fans that Chloe is just a little girl too who wants to go to the movies and hang out with her friends. “One of the things I try to get across to all the little girls we meet who say that Chloe is their inspiration and ask who she admires, is that Chloe is inspired by her fans. ‘I’m a regular kid and to hear you say that to me is amazing’. Yes, people see Chloe on TV, but she goes to school, she works hard, she gets in trouble, she gets her phone taken away and gets sent to her room. One thing that my husband and I have always tried to do is keep Chloe ‘normal’ while living in an un-normal situation. Lots of people can go on to be great dancers and I hope Chloe can do that, but I also want her to be a great person. She is a role model and people around the world are looking at her.”

As well as performances, masterclasses and secrets, Christi promises a few surprises on the tour. They will also be climbing the Sydney Harbour Bridge and visiting Tooronga Zoo. An outback trip is also on the cards if Christi can overcome her fear of Australia’s deadly wildlife… 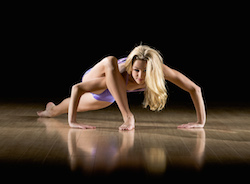 Chloe Lukasiak of the Sequins and Secrets tour. Photo courtesy of Christi Lukasiak.

“I don’t really have a favourite, there are so many with so many individual styles.”

“I love lyrical/contemporary and jazz.”

“I really liked London, but it seems like each time I visit a new city, it becomes my new favourite.”

Do you get nervous before going on stage?

What’s in your dance bag?

“Shoes, shoes, and more dance shoes. A black leo and pink tights for ballet, my inhaler (I have asthma), bobby pins, hair ties and deodorant.”

If you couldn’t dance, what would you like to do?

What are you looking forward to doing in Australia?

“Climbing the Sydney Harbour Bridge, holding a koala and meeting people. Everyone was so nice when we were there last year!”

Tickets and more information about Chloe and Christi Sequins and Secrets: The Oz Tour can be found here: www.facebook.com/sequinsandsecrets, www.chloeandchristi.com.au.

Photo (top): Christi and Chloe Lukasiak come to Australian and New Zealand in the Sequins and Secrets Tour! Photo courtesy of Christi Lukasiak.