Performing on a cruise ship can be a great gig. It gives you daily performance opportunities, while getting to travel and have low living experiences.

So how do you get your golden ticket?

Dance Informa chatted with Norwegian Cruise Line’s Director of Entertainment Production, Robert Dean Hertenstein, about what he and his colleagues are looking for when casting their shows.

Norwegian Cruise Line presents world class shows on their fleet of 14 stunning ships, including Broadway productions Legally Blonde, Shout!, Rock of Ages and most recently Swing! by Lynne Taylor-Corbett, which just opened on the Norwegian Pearl in March, as well as shows created especially for Norwegian such as Paradis (an ode to Moulin Rouge) and the ever popular Elements which is full of contemporary dance, ballet, aerial work, illusions, water levitation and more! Norwegian just recently auditioned in Sydney and Melbourne for performers for Priscilla Queen of the Desert which is set to open on-board later this year.

At any one time Norwegian has 450 performers on board and they see about 750 performers a year from all over the world! And they love Aussies, with usually 2-3 Aussies in each cast!

“Dancing with Norwegian is a great training ground – it makes you so versatile. We want our performers to grow!” shared Hertenstein. “Many dancers have gone onto Broadway and Vegas and some have gone on to perform with Lady Gaga, Kylie, Ricky Martin…to mention a few.”

So how can you book a cruise ship gig and excel your career?

#1. Look the part, but don’t come in costume 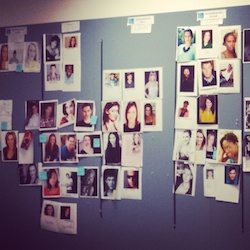 A sneak peak at the casting wall at Norwegian Creative Studios in Tampa, FL.

Hertenstein says auditions are the place to put “your foot self forward.” And that means from head to toe.

“Be conscience of what you wear, how you present yourself,” Hertenstein tells Dance Informa. “One of our pet peeves are when female singers come in and they have this dress on, looking beautiful, and they’re wearing flats. It’s just not attractive.” As far as Hertenstein is concerned – heels are a must for vocalists.

He also cautions against coming dressed like the role you’re auditioning for.

Hertenstein says a dancer or singer’s headshot should really show his or her personality. But, even more important than that, it should be a professional headshot. “Not like a selfie you did outside that you printed up on your computer at home,” he says.

Norwegian Cruise Lines audition around the world, so Hertenstein runs across a variety of resume formats. Whatever the country, he says he prefers something pithy, a “best of.”

“I don’t need a complete history,” Hertenstein says. “I want to see the highlights.”

One page is ideal and in addition to those performing “highlights,” be sure to include your height because that can affect casting.

This all comes with being prepared. Hertenstein urges that people don’t try to learn a song the night before.

“Sing the best that you have,” he says. “If you don’t have a rock song, and don’t have time to learn a rock song, take a song you know and give it a rock edge. You don’t necessarily need a song from the show because that’s what we use callbacks for.”

Hertenstein says it’s important to research the show you’re auditioning for so you know if you’re right for a certain role. But he adds that, while you may walk in to audition for one part, be open to other roles in the show. “You don’t want to pigeonhole yourself,” he says.

#6. Have some vocal training 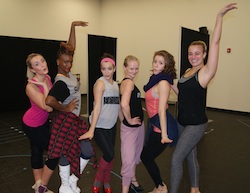 Even if you’re auditioning for what is advertised as a strictly dancer role, Hertenstein advises having vocal training because the dancers on the cruise ship are sometimes asked to sing or speak in a show. There are also some singer/dancer positions available.

“It’s very important,” Hertenstein says of vocal training. “I have people that have started as dancers that are vocally trained and then cross over to a singer/dancer position.”

#7. You get brownie points for additional skills

Additional skills, such as acrobatics and tumbling, are always a plus. “Our choreographers and directors love that element and love to be able to pop in aerial here and there,” Hertenstein says. “Aerialists go so far.”

If auditioning in person is not an option, Hertenstein says he does consider video submissions. He offers the following advice:

Even if you have to fake it till you make it.

And if you don’t get your name called at the time of the audition, Hertenstein encourages dancers and singers to try again and not lose hope.

“Just because you don’t hear from me in two days, two weeks, two months, that doesn’t mean that you’re out of the running,” he says. “We cast year round and the contracts are sporadic. Don’t give up on us because, chances are, we haven’t given up on you.”