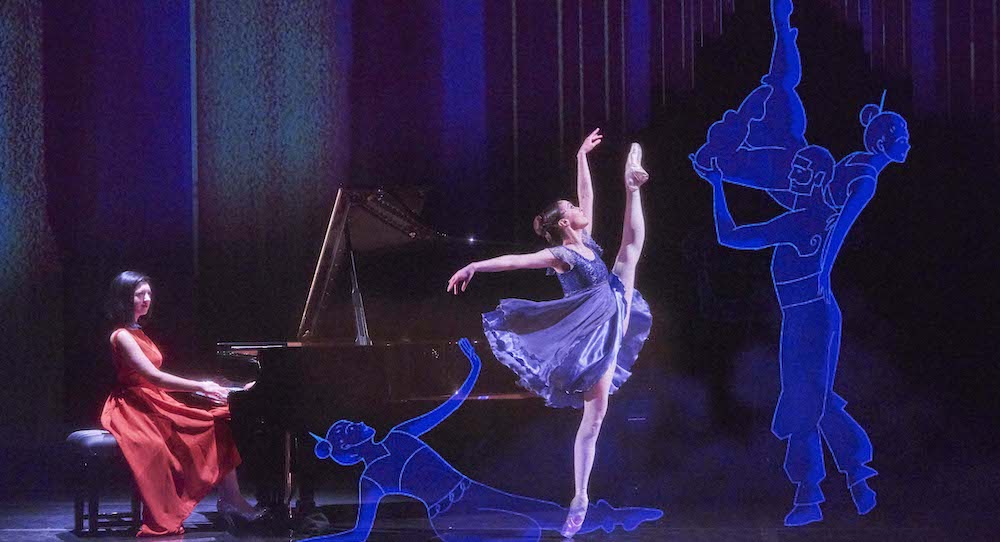 Question without notice: how would you stage Nutcracker with just one dancer? Answer: have Clara dance with a cartoon.

Since it debuted in London in December 2017, Romanian-born pianist Alexandra Dariescu’s show The Nutcracker and I has been playing to consistently sold out houses. Now, little more than a year later, she and former English National Ballet soloist Désirée Ballantyne will bring their two women, one ballerina re-imagining of the Russian classic to the Sydney Festival. Not only does the production rearrange Tchaikovsky’s orchestral score for Dariescu’s piano, but Ballantyne’s Clara dances with projected, hand-drawn animations.

Across her career, Ballantyne has danced plum roles in Giselle, Sleeping Beauty and, of course, The Nutcracker itself (in addition to working with the likes of Michael Clark and Akram Khan), but clearly, until Dariescu came along, she had never been asked to perform with phantom princes. As she reveals, “Well, it is certainly an unusual project, and putting together all these different aspects with the technology does make it different, but luckily I can see my partner on stage. He’s a little bit bleached out with the lights, but I can actually see him.”

Nevertheless, the technical and artistic challenge of dancing Clara in such a specific and unusual circumstance is not something that Ballantyne dismisses lightly. “The difficulty is that while my performance is live, I’m working with something pre-recorded that will never change or budge, so I have to be extremely accurate,” she explains. “I have to keep a very strict movement and tempo. But also, I’m not just keeping track of my steps and the music, which is normal, but the video, which hasn’t been done to a click track, so I have to really keep in sync. I have to know what’s happening in the video, where the music’s going and keep everything together.”

Thus, rather than a complicated count, Ballantyne has memorised the video. “So if something goes out or changes for whatever reason, I can still pick up and know what’s happening.”

For the internationally feted young pianist Dariescu, the challenge of syncing tech to movement to music is no less tricky. “But we do have quite a lot of cues,” she adds, a wry smile evident. “It works very much like chamber music, with three on stage and our technical producer, who sits at the back and does all the video stuff.”

However, as the creator of the show, Dariescu has overseen and directed each stage of its development, and this has doubtless helped to ensure that the three key elements can work seamlessly together. As she says, the choreography (human and virtual) was done to her piano score, so each performance of The Nutcracker and I effectively hinges on her playing.

‘The Nutcracker and I’. Photo by Mark Allan.

“It is the most alive performance that we’ve ever done because you can’t daydream for one second,” she elaborates, before adding, almost as an after-thought, “When I first had this idea, I had no idea whether it was going to be possible, but then at the world premiere it was just so well received.”

Indeed, as we speak, she and Ballantyne are in the midst of a two-month tour, part of which will be their mid-January dates in Australia. Having taken the risk, Dariescu’s vision is paying off handsomely. Whereas we may be tempted to chalk much of this up to the sheer novelty, there is more to The Nutcracker and I than multimedia trickery.

As Dariescu tells it, “We live in a continually developing visual world, and we need to change the concert format. Ballet and classical music both need to get closer to the younger generation, and how do we do that? By involving really cool technology.”

The “getting the kids into it” thing, so common in high culture circles, is a little closer to her heart because, as a young performer, she very rarely plays to her contemporaries. Classical music, like ballet, is too easily dismissed by the young, associated as they are with slow moving 19th century ideas. “Get them into the concert halls,” Dariescu declares, “because the average age at piano recitals, let face it, it’s not, um, under 25.”

From the ballet perspective, Ballantyne had a similar motive for taking on the challenge of The Nutcracker and I. “What’s great is that it’s taken such a well-known classical piece and really moved it forward,” she argues. “It’s moving with the times and really appeals to a younger audience, many of whom have a quite different view of the world than the usual older audience. To bring all this incredible technology and to harness it for Nutcracker is pretty amazing, I think.”

‘The Nutcracker and I’. Photo by Nigel Norrington.

However, there is another twist. The production is partly autobiographical, and Ballantyne’s Clara is really an awakened Dariescu — a little girl whose dream is about to come true. Given that she, too, was once a child dreaming of bigger stages, Ballantyne has shared the journey of her pianist partner. What’s more, their twin adventures continue. “I never knew that I could do Nutcracker at this point and genuinely feel excited,” Ballantyne states. “What was so good was the music, because having heard the orchestral version so many times to hear the arrangement for piano sound so full and be swept away by just one instrument was just incredible. It’s been a thrill to dance Clara like this.”

As both now prepare for another two-show day (this time in a snowy Vienna) and look forward to a summertime visit down under, it is apparent that both have distilled childhood dreams and adult careers into the simplicity of being on stage alone, with just a piano and 35,000 drawings for company.

The Nutcracker and I will be presented at City Recital Hall on 19 January, at 2pm and 7pm, as part of the 2019 Sydney Festival. For tickets, visit www.sydneyfestival.org.au/events/the-nutcracker-and-i.