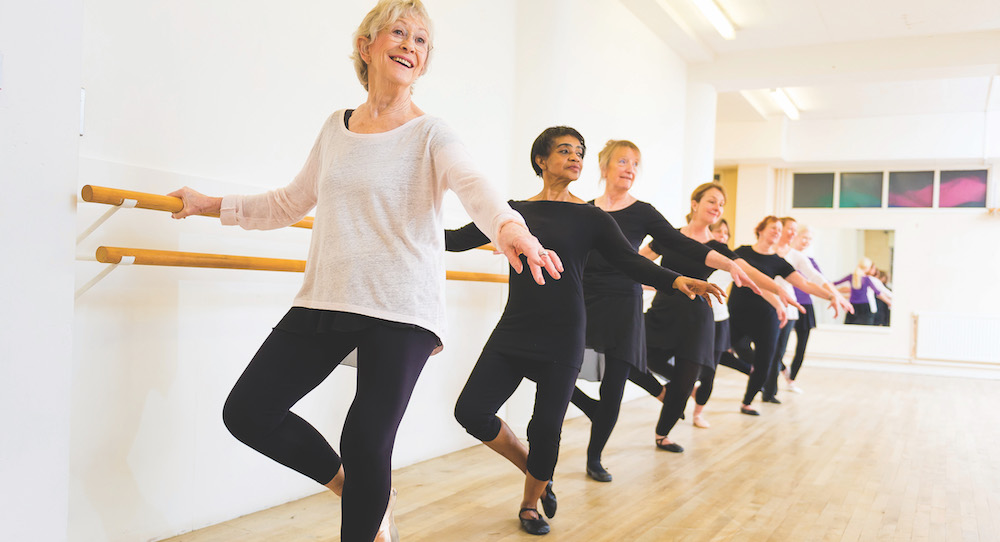 As First World populations age and our attention focuses more and more on the issues and implications of aging, it is hardly surprising that service providers from a range of sectors are scrambling to tap into the burgeoning “grey” market. In this context, the advent of specialist over-55 ballet classes makes perfect sense.

However, when the prestigious century old Royal Academy of Dance (RAD) launched its Silver Swans program here in Australia in September, the bar – or is that barre? – was raised. As one of the UK’s premier arts institutions, the London-based RAD is known throughout the industry not simply for its glittering alumni but also for its commitment to excellence in the teaching of dance. Thus, their entry into the local “dance for oldies” market promises to bring a new level of age-tailored refinement to the standard over-55 casual class.

The other thing about Silver Swans is that one of RAD’s former students is their official Australian ambassador – namely, the Olivier Award-nominated star of stage and screen, Caroline O’Connor. As a lifelong dancer and Royal Ballet School graduate, O’Connor is clearly delighted to be involved. “Anyone who has been a dancer or ever dreamed of being a dancer knows there’s something special about it,” she states. “It’s hard to put into words, but there’s a feeling you get when you dance.”

However, rather than just being a mere celebrity attachment, O’Connor is perhaps representative of the Silver Swans market. As a dancer from a young age, she knows firsthand how it feels to contemplate the thought of not being able to dance. Recalling an occasion at her home in Surrey in the UK, she reveals, “I’d say maybe 10 years ago, I found myself thinking, ‘Oh my god, my dancing days are over,’ and I think I might have actually been grieving about it.”

A busy career starring in shows like Bombshells and Sweeney Todd ensured that wasn’t the case, but the experience left a deep impression, and today it underscores her passion for the objectives of initiatives like Silver Swans. As she observes, “It’s difficult for the older generation to find something that they’re physically comfortable with. You know, not everybody wants to go to Fitness First. You don’t want to go to the gym, you don’t want to run because there’s too much pressure on the knees, et cetera. You want something slightly gentler and also – how can I put it? – something a little more ladylike. You know, at the gym, you’re sort of stomping around and sweating, but dance is not as brutal.”

Of course, at this juncture, the topic of men joining in comes up; and it has O’Connor scratching her head. “I don’t know, maybe if we didn’t call it ballet, older men might not be so put off,” she muses. “I mean, it would be just as good for them for much the same reason as it’s good for women. And you know, they’d be in a room full of ladies.”

Those benefits, whether for men or women, are manifold. “Flexibility, strength, and a workout,” O’Connor elaborates. “It’s also great for balance, and also for memory. You know, there are steps; it’s not just marching around. There are specific moves, and I think that helps keep the brain active.”

Aside from fitness and brain function positives, the classes have a strong social element. For older people, where isolation is often an issue, this can be critical for ongoing mental health. As Silver Swans’ new ambassador duly explains, “I’ve met some of the ladies in the classes and, honestly, their reactions during and after class are quite wonderful to see. You know, they really love the social interaction. They get to take part in something that they’re all interested in, and it’s something for them to look forward to.”

In addition, RAD has taken great care to ensure that the class leaders set a level appropriate for the students. Crucially, this means that Silver Swans classes are not about elite performance and competition. “This isn’t about how many jetés you can do or how high you can jump,” O’Connor points out. “It’s more about the pleasure of it. You’re not competing to win a prize or join a company; it’s purely about the joy of dancing.”

To illustrate her point, she concludes with a story she heard from a woman she met recently at a function in Sydney who had been inspired to take up ballet one night when, walking home from work, she spied a Silver Swans class through a window. Recalling the anecdote, O’Connor says, “She was like, ‘Look at those women in there; they’re like my age,’ and so she wandered in and said, ‘Would I be able to join this class?’ and they said ‘absolutely’ and now she says that the classes are the one thing she really looks forward to.”

In a marketplace increasingly cluttered with activities and hobby courses for the older person, dance (and Silver Swans in particular) offers something that is at once physical, social and artistic for the over-55s.

As RAD begins the further roll out of the program across the country in 2019, the grey ballet phenomenon may well become a veritable ensemble of older Australians stretching and moving and, just for an hour or so, making a dream feel real.