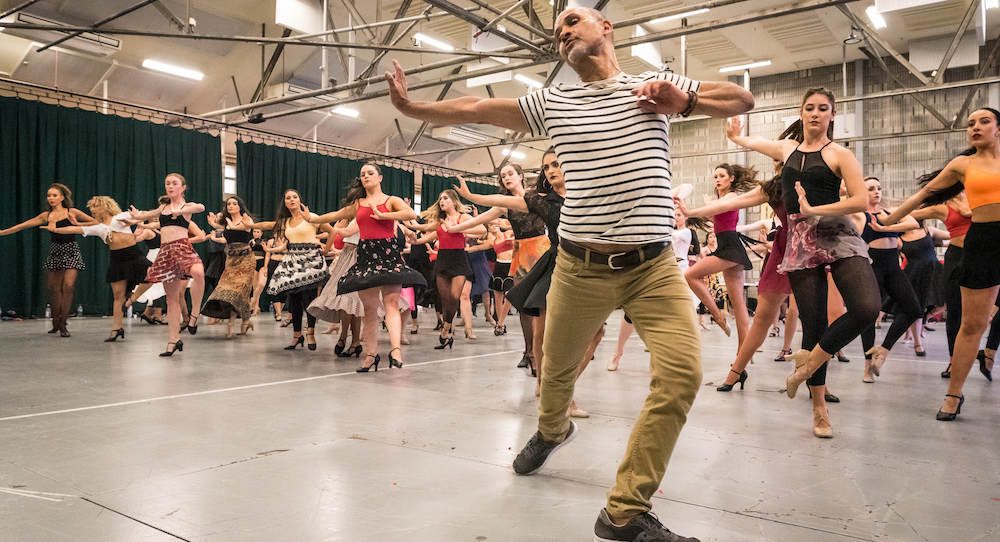 Opera Australia has a new version of West Side Story coming to Sydney in March. It will be staged on the open-air stage on Sydney Harbour. Choreographer Julio Monge, one of few people entrusted with staging the choreography by the Jerome Robbins estate, auditioned hundreds of ambitious dancers recently in Sydney. Dance Informa caught up with Monge just after the November auditions.

He describes his first experience of working with Robbins. “I was very lucky I got the chance to work with someone like Robbins at such an early age. The show was called Jerome Robbins’ Broadway, and it was my first Broadway experience. I had just arrived in New York City from Puerto Rico about a year before that. I didn’t really know what hit me. I remember being surrounded by incredibly talented colleagues. They were all so good! And we were constantly visited by the composers of all the pieces we were working on: Jule Styne, Betty Comden, Adolph Green, Leonard Bernstein, Stephen Sondheim, Jerry Bock. I was 21 years old and a bit naive, thank goodness! I imagine that if I really knew what I had gotten myself into I would’ve been too nervous and unable to function. At times, ignorance is bliss. It was inspiring and scary all at once. You had to be on your toes, literally, because, for instance, none of us knew what the final casting of roles was going to be until just before opening! That was the way he operated. Old school. You had to really earn your spot! He was tough and very demanding, but with his guidance you only performed at your best. You had to grow. You had no choice. It was life-changing, for sure, artistically and personally.”

Monge performed for Robbins for many years. 2018 was the 100th anniversary of both Jerome Robbins and Leonard Bernstein, Monge tells us. He credits that anniversary with a renewed fascination and interest in staging West Side Story. “There were so many innovative things about this show when it was created back in 1957. For instance, how Robbins took the ‘chorus dancer’ out of the chorus and made them the protagonists, which meant everyone had to dance, act and sing; that was a very daring feat. These ideas had been done by folks like Agnes de Mille and others before him but not at this scale. Here, everyone has a name and is an important part of the story. Very few pieces blend those elements as successfully. Conceptually, it was really ahead of its time. So to me, the 21st century is actually the perfect time for this work. Maybe that’s why it’s been done everywhere more frequently now. Technically and artistically, that is true but thematically also; racism, prejudice, immigration, police abuse of power, tribalism, territorial feuds, that is all very relevant now as well.”

Monge describes some of the distinctive stylistic elements in West Side Story as “how both Bernstein and Robbins blend classical and contemporary elements so seamlessly. The performer has to go from hitting classical lines both in the dance and in the music to the nitty-gritty, seemingly improvisational qualities of American and Latin Jazz forms. Being able to navigate those worlds with ease is part of the stylistic challenge of the piece. I try to empower the performers with as much information as I can, so they can respond to the challenge.”

From the audition, Monge noticed that Australian dancers already have a connection to the language of Robbins. “They have a good intuitive response to it,” he says. “Good performers do. In rehearsals, I will make them go deeper into it, but you can already tell they know what Robbins is about.”

Monge is collaborating with director Francesca Zambello to re-set Robbins’ original choreography and create additional choreography for the Sydney Harbour open air staging of West Side Story. His favourite part about staging West Side Story is “the moment when the actors take ownership of the material and make it alive. You work hard and make them repeat everything a hundred times, but then there’s this deeper understanding at some point that kicks in for them, and it becomes very raw and powerful and vulnerable. And that’s where the story lives. West Side Story has so many great elements when it clicks, it can be explosive and quite astonishing.”

Monge describes Robbins as someone with a great work ethic and real passion and commitment toward the craft. “I knew I had a very deep connection with Mr Robbins when I first worked with him, but I had no idea that 30 years later, I would be one of the passers of the torch,” he says. “His work affected me very profoundly. It made me think very seriously about what theatre was about. Now I’m deeply honoured to teach others what he so roughly and lovingly ingrained in us.”

Monge is in demand: he is collaborating with playwright Tony Kushner on the screenplay of the film version of West Side Story, directed by Steven Spielberg, as a consultant on Puerto Rican linguistic and historic elements. He will also will be directing another version of West Side Story in his homeland of Puerto Rico, and will re-set the choreography in another production in Tokyo.