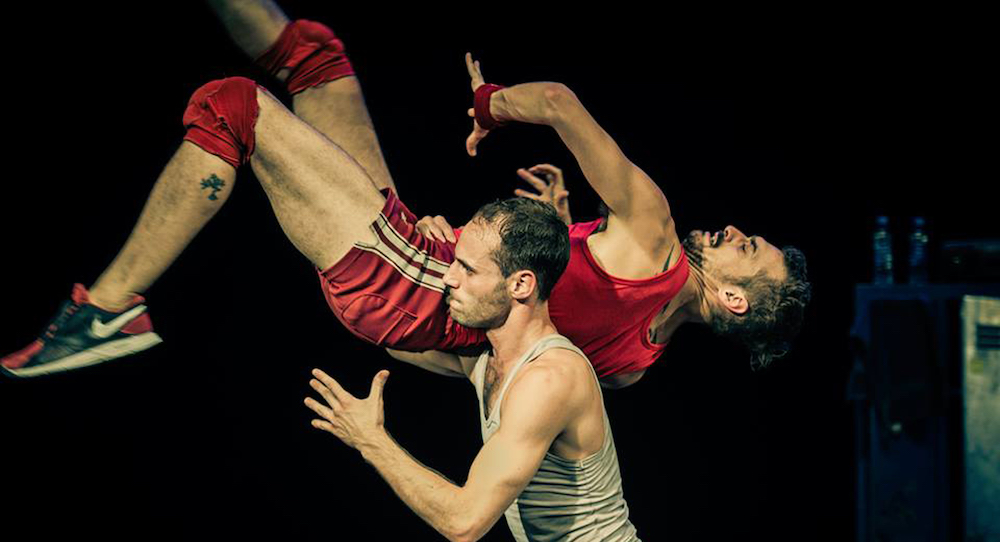 There’s no need to be shy, even though the correct terminology, direct from one of the horses, is cock. A red cock, what’s more.

From the streets of the Argentine capital Buenos Aires in 2008, to the a theatre just off one of Adelaide’s central city squares for the 2019 Festival of Arts, the globe-trotting two-hand dance theatre hit Un Poyo Rojo has been on a remarkable and unexpected journey. Starting out as a 15-minute movement skit for a local event, the show is now doing the international festival circuit and its principals have left South America for the cultural epicentre of Paris.

Speaking to Dance Informa from the chilly autumnal climes of the France, Alfonso Barón is unambiguous. Although Un Poyo Rojo has sometimes been translated as “a red stone bench” (perhaps in reference to its locker room setting) we are told bluntly, “No, it’s definitely meant to be cock.”

The reasons for this insistence stem from more than a desire to tantalise and, in turn, tap into something fundamental about the work. Set in a men’s locker room, the show examines what happens when two guys are left alone in an environment that is at once macho and competitive whilst also being an undeniably sexual arena where bodies and other vulnerabilities are revealed. Thus, with a mixture of dance, acrobatics and comic theatre Barón and his onstage partner Luciano Rosso take us on a highly improvised and sweaty adventure beneath the surface of middle class denial and beyond the reductions of everyday language.

“It’s like two little animals,” Barón elaborates, “because slowly we began to create something that was about, how do you say it, animalisation; although actually, at the beginning, it’s a real love story between two guys.”

However, rather than limit itself to standard issue homo-erotica (and risk lurching into camp kitsch), Un Poyo Rojo aims to blur the lines of assumption. As Barón explains, “It’s not a gay story. It’s about a first kiss or about desire or love, but it does not have to be for a man. It can be for a woman, or maybe a cat. So, we don’t put all the eyes on the gay theme because for us it’s really important to tell a story and not do something completely abstract or only about technique, or only about humour.”

Indeed, the creative rationale behind the piece has almost nothing to do with the current crassness of sexual identity politics. Rather, the idea was to leverage the intuitive power of movement and our instinctive reading of it as a means to put the focus on core human universals, on what lies beneath our veneer of civilised behaviour.

Recalling the show’s beginnings (which occurred before he replaced original cast member and co-creator Nicolás Poggi in 2011), Barón says, “When Luciano [Rosso] and Nicolás began working on it, they started to show in the movement the kind of behaviours that you do when you’re starting to like someone. You know, you compete, you show off all the cool things you can do to get the other person’s attention.”

In order to keep the focus on the mating and status rituals of the human animal, the creators decided to go without a script. “We don’t use words because we wanted to use the body’s language. It’s much more universal,” Barón insists. “Also, the public has a different interpretation of what they see. They are free to understand what they can or what they want. So, if we choose a gesture – maybe I put my hand on your shoulder – maybe it’s a gesture to tell you to come with me, or to ask how are you. But you know, we have different types of audience, sometimes little kids, so everybody will see what they see.”

Banal though this is, Un Poyo Rojo has another deck shuffling trick up its sleeve. As Barón reveals, there is a “third character” on stage — namely, an old radio that plays in the locker room. “Live,” he emphasises. “I mean, it’s not a recording. Every city is different. It’s whatever is on the local station, and that really gives the show a freshness and keeps it alive every time. The radio actually gives the intention and the colour of the scene.”

In addition to tapping into the audience’s hometown associations, the “randomness” of the radio keeps Barón and Rosso on their toes, which, after a decade of touring the same show, is not to be sneezed at.

Barón laughs when the topic is raised. There is no room, he argues, for boredom or complacency. “The only thing that’s really scary for us is the body,” he admits. “You know, we started when we were 20, and now we are much more than 30, so we have been changing things because of our physical injuries. The show is very strong on stage. There is only two of us and we are never off stage.”

He adds, with another wry chuckle to underline the point, “Actually, I think that the only thing that will make us stop is our physical condition.”

For a work that is rooted in the body (and our read of it), this is doubtless an appropriate caveat. However, before their respective bodies give out, Barón and Rosso will continue to dance for an hour every night in their sports gear. Luckily for Adelaide Festival audiences, neither is a blow-waved president with a penchant for juvenile locker room crudity, meaning that their foray into the smelly sock realm of changing rooms will offer something a little more revealing than a dirty mind and a flash of red.

Un Poyo Rojo will be presented as part of the Adelaide Festival 28 February – 5 March 2019. For tickets and more information, visit www.adelaidefestival.com.au/events/un-poyo-rojo.