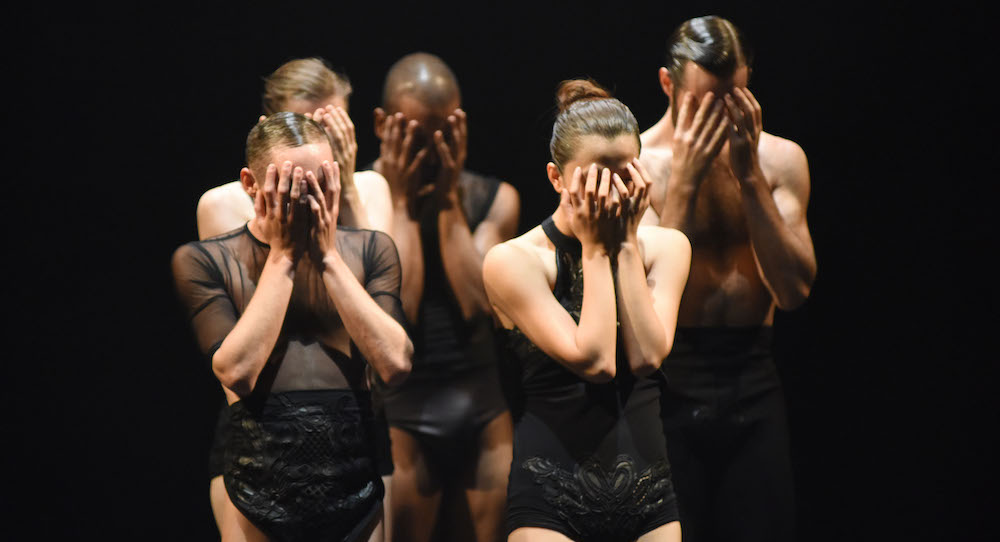 You can almost hear the cogs whirring in her head. There is a pause. Then: “I think in life, everything is emotional,” she says. “The most important thing for me is the minimum and the maximum.”

Israeli choreographer Sharon Eyal is one of the current darlings of the contemporary dance world. Awards and superlatives regularly fly in her direction. The former Batsheva dancer and now Artistic Director of L-E-V Dance Company is recognised for her propulsive and intense creations, although she herself resists the labels that marketers and scribes tend to foist upon her. “I don’t know exactly,” she muses aloud, “but you can describe my work in many different ways.”

However, regardless of adjectives, Eyal and her company will be in Sydney this January to present two related but stand-alone works under the banner of Love Cycle. The first, OCD Love (which was a hit at the 2017 Adelaide Festival) will be augmented by Love Chapter 2. Both works drill into the rich and tumultuous terrain of love and obsession and both are driven by hard, fizzing electronica.

Of the latter (which will make its Australian premiere), she reveals, “Something about Chapter 2 is that it’s a bit like the love that you miss. You know, when you have the moment but you miss it. Although it is about sadness and loneliness, it’s also full of joy. So I think it’s about the extremities. You can have this happiness, almost like a child, but also this great sadness. It’s not one story; it’s everything together, because I can change it all the time.”

Meanwhile, OCD Love does indeed investigate Obsessive Compulsive Disorder. The work was triggered by American slam poet Neil Hilborn’s 2013 viral sensation OCD after a friend introduced Eyal to it. Hilborn’s performance of the poem has been viewed more than 70 million times online and, in a sense, L-E-V Dance Company’s re-imagining takes off from there. As Eyal explains, “First of all, I love it because it all sounds like choreography for me in how he organises it. It’s a very beautiful poem, and it took me to a different place.”

Although we may be tempted to wonder if Eyal thinks of herself as somewhat OCD, she is quick to bat away any curiosity. “It doesn’t matter if I am or not,” she insists. “I think the poem is something that connected with me and is important for me, you know. It’s important that it touched me and that I could continue from this moment.”

Of course, in raw production terms, that “continuing” is a process of distilling inspiration into work, into movement on stage. For Eyal, this shaping begins with free invention. “I improvise myself, and the dancers or the rehearsal director film me and then they copy the movement,” she reveals, before adding, “It’s really interesting for me to see my movement inside their bodies.”

Here again, Eyal is keen to eliminate much of the habitual distinctions we make between one thing and another. Explaining that she and the other members of L-E-V collective have worked together for years, and have a deeply refined shared process, she elaborates, “It feels more like a process of life, not pieces. They’re not separate, you know. My life and what I’m doing are part of me, so it’s hard to say. Actually, I’m not even trying because I’m giving myself the freedom to do.”

Indeed, the more she ponders it, the less likely she seems to accept common dichotomies and their attendant labels. “I’m almost not calling my pieces art,” she expands. “It’s something else. Life. You know, I love art, but in the end I present feelings. It’s physical, it’s intellectual, it’s shaped; but it is just a kind of response, an emotional response.”

Whilst this is reminiscent of the aesthetic and processes of things like naïve art, method acting and interpretive dance, OCD Love and Love Chapter 2 remain highly sculpted creations, reflecting decades of dance experience and, as Eyal would surely contend, of life itself. The net result here, it seems, is a kind of openness to danger.

“I cannot be bored,” she declares with a nigh visceral snarl. “If there’s something that isn’t making me feel something, then it’s boring me; so I feel like it’s demanding but in a good way.”

Audiences at L-E-V Dance Company’s upcoming Sydney Opera House season will perhaps come to agree, as many around the world have already, that Eyal’s vision is well worth any so called “demands” it may place upon them.