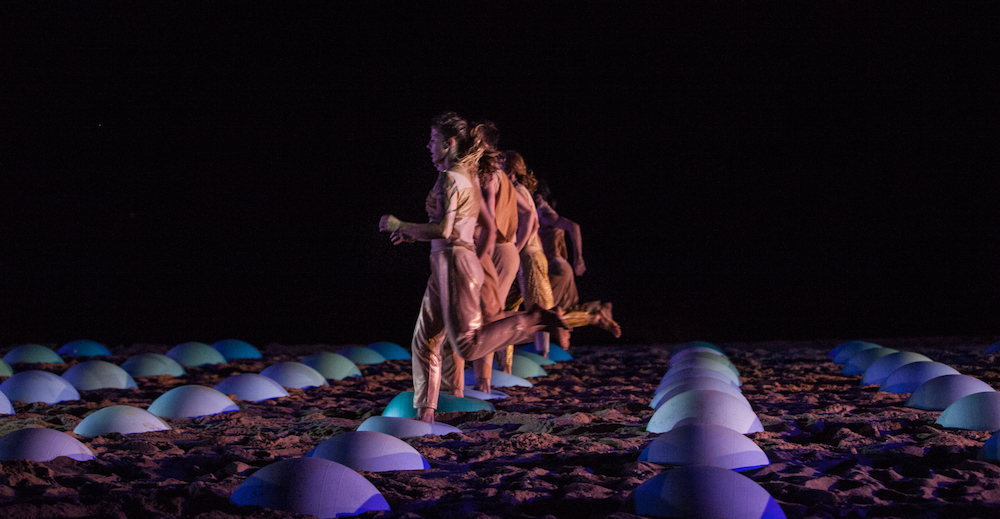 The next instalment of Dance Informa’s series, Iconic Dance Spaces Around the World, looks at The Strand Beach, in Townsville, Far North Queensland.

It’s summer time in Australia, so what better time to introduce another dance space, this time made of…sand! Australia is an island, albeit a huge one, known for its iconic red centre and vast coastline  full of surfing beaches. So what better dance space to use than a white sandy beach in Far North Queensland to highlight the creativity, energy and beauty of Dancenorth’s production of Tectonic whilst also drawing attention to the impact of climate change.

In July/August 2017, Townsville’s Dancenorth delivered this spectacular dance performance on Strand Beach, Townsville, in collaboration with the Urab Dancers from Poruma Island.

Tectonic is an explosive dance piece exploring the issues of climate change with a unique stage of 18 Fitballs partially buried in the sand, drawing attention to the 180 Poruma Island residents threatened by rising sea levels.

How did Dancenorth turn the local beach into a spectacular evening dance space, lit up for the audience to take full advantage of the intense 15 minutes of contemporary dance using Fitballs as springboards – leaping, diving, flipping and running?

Dancenorth Artistic Director Kyle Page confesses that he didn’t realise the enormity of the project and the associated logistics. Firstly, Dancenorth had to get full support from the local council, and fortunately the timing aligned nicely with the Strand Ephemera Festival, which gave Dancenorth the approval to literally dig up the beach.

“It was a full week of excavations,” Page explains, “a metre wide and a metre deep with a string line to ensure equidistance between each ball, forward, back and side.”

And the depth had to be exactly the same as well, because this is the stage.

This would be Dancenorth’s stage, the dance space throughout the Festival, performing twice each evening and three times on weekend evenings. A lighting rig was brought in to light the performance space so that the audience could see the dancing and diving, flipping and flying.

“Because of the specific colours we wanted the balls to be, it ended up being a massive undertaking,” Page reveals.

There were 9 rows of Fitballs with every second row “bespoke” painted with tropical ocean colours – graduating from light blue-ish green to a darker shade.

“It was a stunning visual feast,” Page says with enthusiasm. “We planned to have the Fitballs installed on the beach with each one painted in a spray painting workshop. This took 4 days due to the special paint required, as well as the specific graduating colours we wanted.”

And then of course there was the question of where to store the balls between performances.

“We actually stored the balls in someone’s house, bringing them out when required, transporting them to the beach and going through the process of half burying them in the sand in perfect alignment and to the same depth,” Page says.

And how and where did the dancers prepare and rehearse for Tectonic, which has such a significant acrobatic element?

Page explains that the first “rehearsal” was in a giant trampoline centre, with the dancers learning how to do a variety of back flips and becoming familiar with flying high. The second rehearsal was at the beach.

“We all went to the beach with shovels where four Fitballs were wedged down in the sand,” Page shares. “We had morning and evening rehearsals to avoid the heat. Closer to the performance date, we kept one row of Fitballs down in the sand with a fence around the area. I owe a lot to the dancers for their hard work, not just dancing but also shovelling sand to embed the Fitballs for rehearsals!”

In terms of seating and viewing options, this was organised depending on how close audience members wanted to be to the dance space, and how early they arrived. Those closest to the performance space sat on the sand, the row behind sat on footstools, and behind that there was an area for the audience to bring camp/folding chairs, with standing room left for everyone else at the back.

Does Page have plans to use the beach again for another performance?

“Performing outside is a way of life up here,” Page says. “Townsville and Dancenorth are so connected to the beach and the ocean that it’s quite probable we’ll perform again outside. I’m just so glad I took the reins of this company at such a young age, because I had no idea about a lot of things, including what an artistic director is supposed to do!”

Page’s strategy is coming up with a great idea first and figuring out the logistics after. “Anything that seems insurmountable generally produces incredible results, and I’m not going to stop now; I’m having too much fun.”

Don’t miss a new to Sydney work by Dancenorth called Dust, which will be performed as part of Sydney Festival at Carriageworks from 9 to 13 January 2019. For tickets and more information, visit www.sydneyfestival.org.au/events/dust.