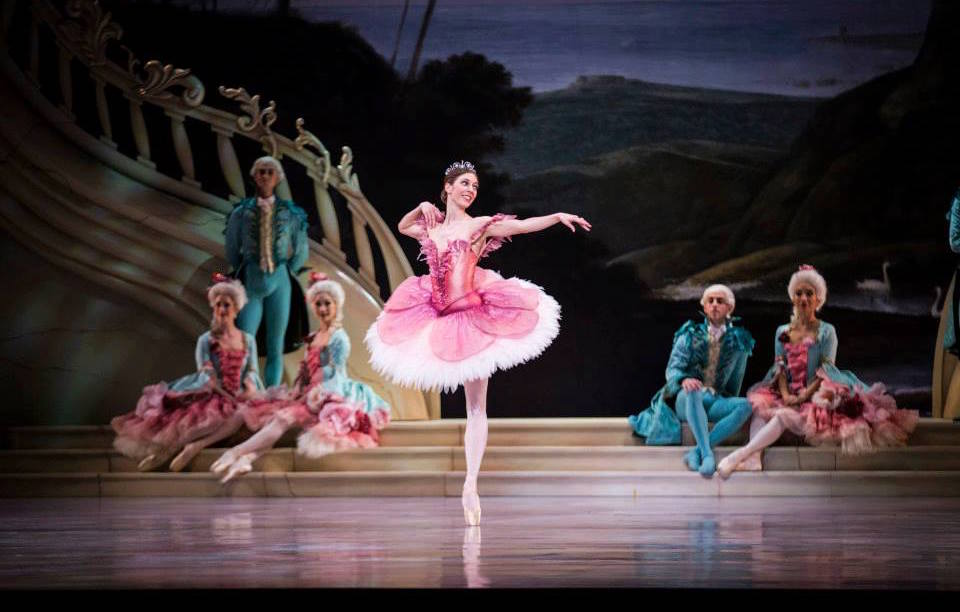 David McAllister will naturally be hoping that his much anticipated production of The Sleeping Beauty becomes the new staple of the company’s repertoire. Given that his only prior choreographic offering was a brief contribution to the Australian Ballet’s 50th Anniversary Gala in 2012, this is no small wish. While his years of experience dancing in earlier productions of the ballet and the help of collaborators (including designer Gabriela Tylesova) provide a strong basis for McAllister’s inner confidence, the pressure is on him and his dancers to deliver a masterpiece.

Lana Jones and Kevin Jackson as Aurora and the Prince. Photo by Kate Longley.

Unsurprisingly, nerves were in clear evidence everywhere on opening night and seemed to particularly affect the soloists; a number of the fairies delivered disappointingly safe or insecure performances in the first act, not quite managing the lightness and spontaneity required from these roles. Fortunately, these nerves seemed to ease as the night wore on.

Despite a few isolated technical issues of her own, Lana Jones as Princess Aurora performed with the elegance and natural refinement of a young royal destined to capture the heart of a brave prince. Compared to some other versions of the Princess, Jones’ Aurora seemed to lack the princess’ defining youthful spontaneity in Act I, but offered a more grounded and mature presence in its place. Kevin Jackson complemented her well as Prince Desire, possessing all the aristocratic air and clean, yet fluid, quality of movement essential to the Petipa style.

It was Chengwu Guo and Ako Kondo, however, who stole the show as the Bluebirds in Act III. Guo, with his characteristic brilliance and agility seemed tailor-made for this role. Recently promoted to the ranks of Principal Artist, Kondo showed us why with her extraordinary precision and lightness as his partner.

Tylesova’s set, in keeping with McAllister’s wishes, was remarkably opulent featuring gigantic swirls, chandeliers and matched by a colourful, fantastical array of costumes fit for a fairytale. Aurora’s tutus in Act I and III kept their traditional pink and white colour schemes respectively, her Act III tutu also mirrored the overall white and gold colour scheme of the set. The overall effect of Tylesova’s designs was awe-inspiring, if at times rather gaudy. There were audible gasps from the audience whenever the curtains opened on a new scene, particularly the setting of Act III.

Ako Kondo and Chengwu Guo as the lovely Bluebirds. Photo by Kate Longley.

Given this, the rather old-school stage tricks, which included releasing gold glitter from the ceiling in the finale, were unnecessary and somewhat lowered the tone in my opinion. Indeed they seemed to draw attention to what was lacking in McAllister’s production of Sleeping Beauty, namely a deeper sense of vision and daring. His Beauty is a solid homage to tradition with a few personal touches and changes of emphases, which distinguish it from its predecessor. But at least from an artistic perspective, it is difficult to justify the $1.8 million price tag of this 2015 production.

Nonetheless, The Australian Ballet’s new Sleeping Beauty provides all the essential elements lovers of this fairytale have come to expect and more than enough lavish imagery to keep them returning to the theatre. It therefore represents a welcome, if artistically un-revolutionary, addition to the repertoire.

Photo (top): Lana Jones (as Princess Aurora) enters and charms the court in The Australian Ballet’s The Sleeping Beauty. Photo by Kate Longley.