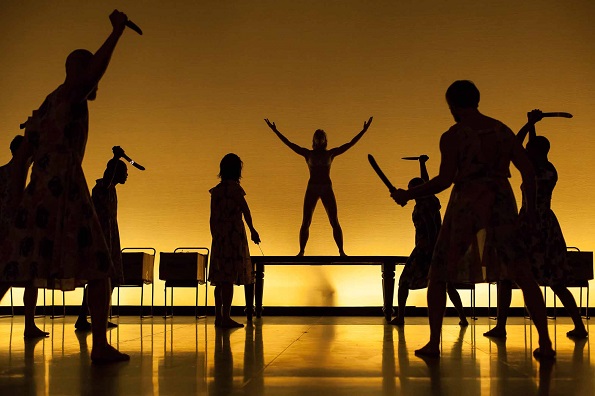 Direct from Ireland, the gloriously-named Fabulous Beast Dance Theatre brought a double bill to Melbourne Festival last month. In a nod to the centenary of the Ballet Russes’ Le Sacre du Printemps, the Irish company presented interpretations of two of Stravinsky’s great ballets: The Rite of Spring and Petrushka.

Rite was never a light, cheerful romp. With themes of sacrifice, death, fertility, sex, ritualism and mysticism, originally it was created to represent pagan Russia and the mystery and power of spring. Fabulous Beast’s version is thus suitably gritty, graphically violent and somewhat confronting (for those of us sitting in the front row at least). Complete with spit, dirt, knives, full nudity and terrifyingly realistic dog masks, this is certainly not relaxing Sunday afternoon entertainment; I found it to be an interesting take on a crucial classic that has been re-imagined in myriad ways, though not exactly ground-breaking.

The action takes place not in a pre-Christian era, but in a 20th or 21st century war-time winter. The costumes, to begin with, are drab and down-trodden, and the performers clutch cardboard boxes marked ‘fragile’. Many, varied depictions of aggression, victimisation and sacrifice ensue.

Although the versions we may be most familiar with involve Rite being blasted ferociously by a full orchestra, Stravinsky’s score was in fact written for two sets of hands on one piano. This production returns to that simplicity (if that noun can be used in relation to Stravinsky), with two sisters, Lidija and Sanja Bizjak performing live at a grand in the stalls.

With completely white costumes, plus a white backcloth lining the three ‘walls’ of the stage, Petrushka is a stark contrast to the earthbound animalism of Rite. The energy, as well, is different; as if we have emerged from the darkness of a long winter, it is happy and spirited – a definite lift from the intensity of Rite.

As this interpretation bears little resemblance to the traditional narrative (bar the use of white face paint), it was at times difficult to find the link. Throughout both Petrushka and Rite, the movement is simplistic, rhythmical, repetitive, and ritualistic. From a choreographic point, it is uninteresting, but within the theatrical whole, it makes sense. I found there was little to really connect with thematically or visually in Petrushka, but contented myself with just watching the incredibly strong and passionate performers from every corner of the globe.