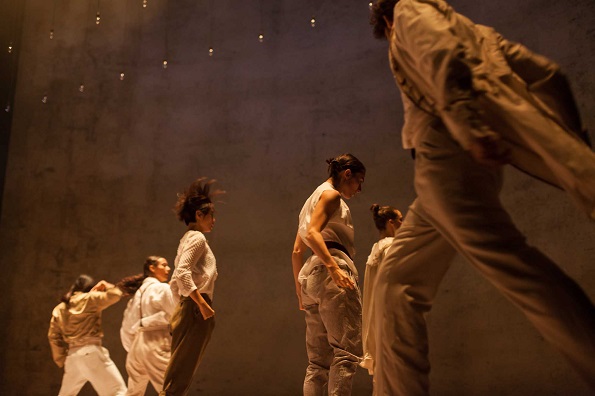 In 2011 Israeli-born Hofesh Shechter brought his hugely popular Political Mother to the Melbourne Festival. We were lucky enough this year to welcome him back, this time with a world premiere: Sun.

This new production is just as energetic, just as impacting and just as loud as Political Mother. With a hypnotic, driving score composed largely by Shechter himself, it reels you in and dazzles from start to finish. Irving Berlin’s Let’s Face the Music and Dance is woven into the soundscape, taking on a distinctly darker meaning than when it originally appeared in the musical comedy Follow the Fleet. At the end of the work there is also a sequence of choreography to Wagner’s Tannhauser. A snippet of this is shown at the opening of the work; proof that ‘everything is going to work out alright’ – as the choreographer mischievously tells us by voice-over.

This starting-with-the-ending approach continues throughout. Structurally, the work is episodic; chopping and changing and returning to the same scenes – or versions of them – over and over. This is an intriguing style, and quite unique; it had me hooked.

Shechter’s vocabulary is instantly recognisable, with its impressive combination of looking both raw and polished at once. The movement is often loose, released and heavy, qualities that can be difficult to bring into unison; but of course this is achieved by a company of magnificent dancers. Big, brash and deep is contrasted with minimal, almost Fosse-esque – and it works. There are even incorporated elements of Lindy hop, folk dance, music video pop and ballet. The mass group numbers particularly are intricate and layered, and have a trance-like quality that made me want to join in.

A sense of theatricality runs through the work, lead by a sinister, tyrannical ringmaster. A number of flat ‘puppets’ are also employed; noted in the programme as Businessman, Hoodsman, Tribesman, Explorer, Sheep and Wolf.

Sun, as I understood it, speaks of violence and oppression, of civilisation and colonisation, of darkness and light. At times these ideas feel too blatant, their messages too forced, but on the whole I found this work to be compelling. Sun is manifestly sinister, shot through with humour; from what I’ve seen so far, a Shechter trademark.