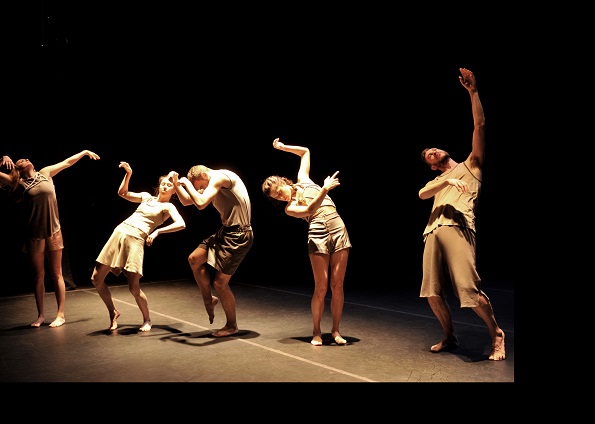 ‘…every art of mankind comes from Prometheus.’
Aeschylus, Prometheus Bound

In Greek mythology, Prometheus gives fire to mankind, for which he is punished by the gods. A Small Prometheus, an interart collaboration between composer and sculptor Robin Fox and choreographer Stephanie Lake doesn’t set out to explore the Greek myth but rather proposes to explore the physicality of heat, and the co-existence of darkness and light in human nature. These themes are explored in a series of kinetic sculptures and choreography, in an ambitious work well suited to the festival context where audiences are anticipating spectacle.

The three major kinetic sculptures created for the piece by Robin Fox recall minarets. The sculptures are revealed to the audience by the first action the dancers perform which is to light and animate the sculptures. Each minaret houses a circle of candles. Once lit, the heat from these candles turns a fan in the dome of the minaret. From these fans hang chimes which beat against the metal wall of the minaret creating an aleatory soundscore. The mesmerising sculptures embody a clear cause and effect: they make the heat from the candles visible and subsequently audible. We are drawn away from our kinaesthetic response to the sculptures with the overlay of a soundscore and dance. From this point, the sculptures become increasingly extraneous to the performance, used as props rather than as an essential manifestation of the artwork.

The electronic soundscore riffs on and layers emblems of matches being stuck and manifestations of the chiming from the kinetic sculpture. This soundscore enters before there is much opportunity to absorb the experience of the sculpture, its movement and noise. The aleatory nature of the sound produced by the sculptures has more promise than is realised, and is obscured by the recorded soundscore.

Five virtuosic dancers – Alana Everett, Lauren Langlois, Rennie McDougall, Lily Paskas, and Lee Serle succeed in illustrating the motion of flame, of heat, in frenetic phrases and sequences. We see shapes created by the sculpture transposed onto the dancers bodies: the spirals of motion; the collapse of flame; luminosity given rhythm in a match striking dance: a duet between the two men with torches in their hands trails light behind their movements reminiscent of the arcs of fire twirlers or glow sticks. We are not invited to linger long with any physical image.