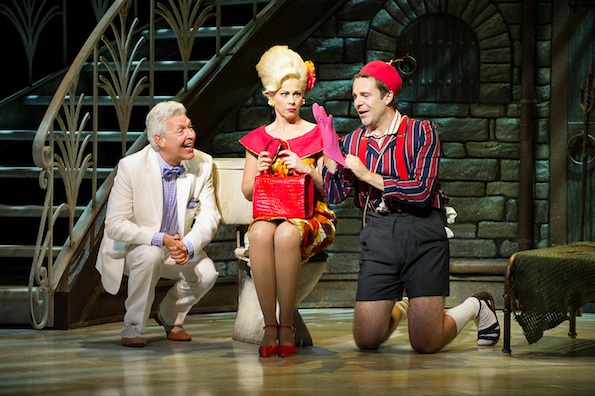 Based on the 1988 film starring Michael Caine and Steve Martin, this Sydney-based stage production will have you in stitches! The musical, which is set in the French Riviera, sees two con men compete to steal $50,000 from heiress Christine Colgate (played by Amy Lehpamer). What ensues is a cunning battle between the two men, where the loser must leave town.

The show on Wednesday 23rd of October was a pure treat from start to finish. Imagine a perfectly chosen cast, beautiful set and plenty of laugh-out-loud moments. Featuring stage legend Tony Sheldon as the suave Lawrence Jameson and Matt Hetherington as the bold and brash Freddy Benson, they were a perfect match in comic timing and professionalism.

The beautiful Amy Lehpamer looked gorgeous in the role, where her vocals never hit a low note. Katrina Retallick in the role of Jolene Oakes, a vulgar lady from Oklahoma, and Anne Wood as the American divorcee who enjoys a fun rendezvous with Lawrence’s sidekick and chief of police, played by Blue Heelers star John Wood, were both hilarious in their roles.

An 18-piece orchestra provided the background for pleasing choreography by Australian Dana Jolly. Elegant costumes were quite fitting in suiting the French Riviera scene and added a level of attractiveness to the set design and layout. Showing what true professionals the cast are, when one performer’s dress strap came loose she was able to ad lib and make it part of the choreography.

It might not be a production for the children, but it will leave adults wanting more.

The production of Dirty Rotten Scoundrels extends into December! For tickets, visit ticketmaster.com.au or call 1300 723 038.