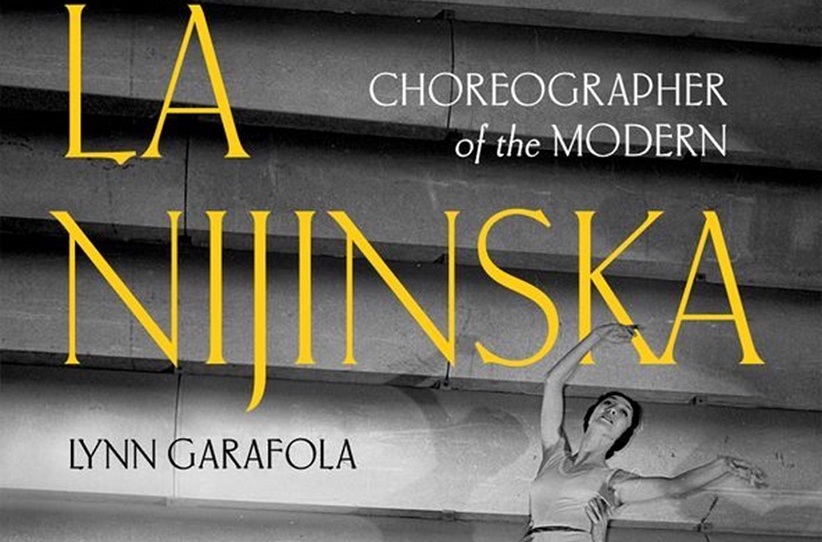 Finally — La Nijinska: Choreographer of the Modern — a book that gives Bronislava Nijinska (1891-1972) her rightful place in the ballet and dance world. She is often overshadowed by her megastar brother Vaslav and because she is a woman, and/or other backstage machinations, as well as some books and critics taking against her or not including her, her work has been obscured and ignored. Generally, she was the only lady apart from the dancers in the companies that she worked with and she was the first female ballet director Diaghilev used.

While thick and heavy (over 500 pages), it is meticulously researched, and written in an easy-to-read style. It is divided into 16 chapters, with a preface, photos and an extensive index. Professor and dance historian Lynn Garafola gives a very detailed examination of Nijinska’s life, including the utilization  of primary source material from the Nijinska Collection that has only fairly recently become available, unravelling backstage ballet politics.

We learn of her tumultuous, peripatetic life — and her resilience. In 1934, when she was 43, she went to Los Angeles for the first time, having globe trotted as a freelance choreographer, given birth to two children, divorced one husband and married another, was shaken by the descent into madness of her brother Vaslav and endured various political revolutions. She became what Garafola calls “an Amazon of the Avant Garde”. Her thoughts about movement, dance, theatre and creation of works are included and discussed. Insisting that music and movement work together, she developed her choreography into sculptural shapes and flowing, precise patterns. She was an inspirational model for Agnes de Mille, Martha Graham and Twyla Tharp, among others, plus the numerous dancers she taught.

Garafola follows Nijinska’s life from her birth in Belarus in 1891, and starting at the Imperial Ballet School at age nine, she graduated with top honours. Starting in the corps de ballet, she soon became noticed by critics.

Clashing stormily with Sergei Legat and Nicholas Sergeyev at the Mariinsky, Nijinska sought to join Sergei Diaghilev’s company along with Vaslav, who was already dancing for him, but Vaslav tried to prevent her. Vaslav, however, sometimes used Nijinska to experiment with his choreography, forcing her to dance en pointe in soft shoes and perhaps developing and strengthening her high elevation.

Nijinska resigned from the Mariinsky when there was the major scandal over Vaslav’s costumes for Giselle. Nijinska then did work for Diaghilev until his death, who either favoured or obscured her, as he did with all of his creators and performers. She had mixed feelings about Diaghilev, but he attended both her weddings to give her away. Yet, he and Vaslav ruined her hopeful romance with celebrity opera singer Feodor Chaliapin.

By 1921, we find Nijinska in Kyev, where she established a School of Movement that, while using classical ballet as a base in training, insisted on more ‘contemporary’ style for performance. Serge Lifar was refused entry. She continued to encounter him at various times, and he took over her place as Diaghilev’s main choreographer. In April 1921, however, with the Ukraine about to be invaded and taken over by the new Soviet regime, Nijinska just managed a hazardous border crossing to Poland with her family.

We feel we get to know Nijinska, with her chain smoking, difficult, demanding, perfectionist, outspoken personality that most people loved but drove others to distraction. Her physique and fierce personality told against her at times. She inspired great loyalty in some of her students. We learn her thoughts on dance, theatre and movement. “We must destroy ‘theatre’ as a background for the display of dancers in a painted ‘box’. Everything in theatre must be action,” Nijinska wrote. She aimed for a blend of modernism but with a classical base. Some of her works were quite abstract.

Garafola details how Nijinska frequently worked for Ida Rubinstein, at the Paris Opéra and for the de Cuevas Ballet, but it was a quite unstable relationship. Nijinska struggled, at intervals, finding it difficult to amass the fare back to where her family was, at others living in affluence. Her mother helped rear her children, and her second husband Singaevsky often travelled with her acting as her personal assistant. Nijinska was also often in London.

When World War II hit in 1939, Nijinska had to leave her home in France and ended up moving to the USA, where she would live for the rest of her life, especially New York, Los Angeles and Buffalo. (She also toured to Buenos Aires in Cuba and loved it, for example.) Nijinska worked on the film of A Midsummer Night’s Dream directed by Max Reinhardt. She was joined by quite a few of the ex-Ballets Russes dancers. (Garafola is terrific at distinguishing between the various companies.) Her relationship with George Balanchine was quite acrimonious.

Assorted companies treated her dishonourably, but she, too, could be deceitful, accepting simultaneous bookings. She applied for compensation from the post-war French government for her lost sets and costumes, but that was dragged out and rejected by the lawyers.

During her last years in Los Angeles, Nijinska still was powerfully energetic and poured most of her enthusiasm into teaching. She worked with, among others, Alexandra Danilova, Tamara Toumanova and Andre Eglevsky.

Lynn Garafola’s La Nijinska: Choreographer of the Modern is a marvellous book that illuminates the life of a major female choreographer, giving Nijinska her rightful place.