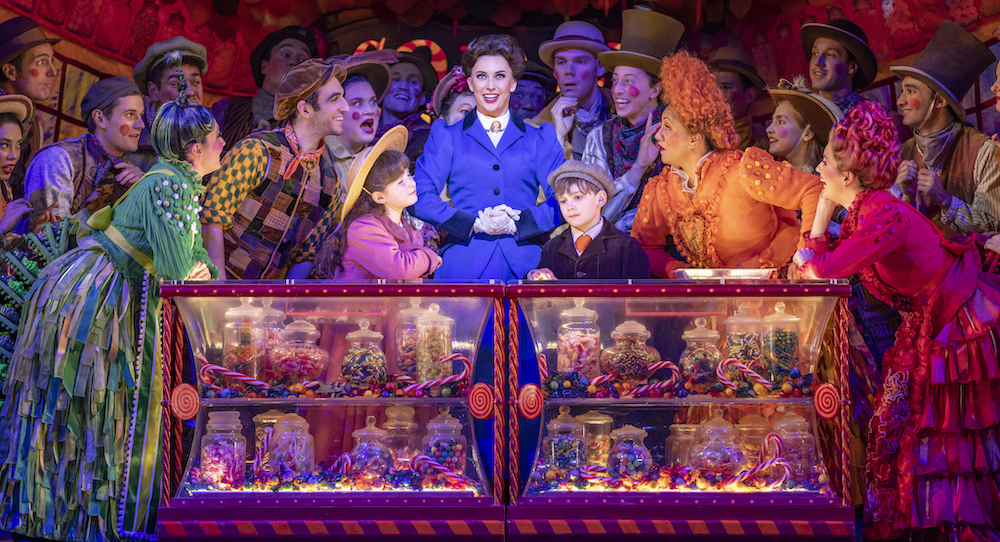 On May 15, the acclaimed award-winning Mary Poppins flew into the Sydney Lyric Theatre, dazzling audience members across all generations.

The supercalifragilisticexpialidocious new production, adapted from the beloved stories by Australia’s own Pamela L. Travers, and the original film of the world’s favourite Nanny, filled the stage with exhilarating energy and breathtaking moments. With exciting choreography, spectacular songs, flawless costumes and magical sets and effects, the performance reminds us of a story about family and the infinite possibilities that lie within us all.

The superb production by Disney Theatrical and produced and co-created by Cameron Mackintosh, has been hailed “practically perfect in every way” (The Times, UK), “an unbeatably splendid evening” (Daily Telegraph, UK), and The Daily Express said, “This production is a triumph!”

Since the original stage performance in London 2004, the production has played in over 100 cities in four continents and has evolved into one of the most spectacular musicals of all time. With precision and order being thrown into chaos over the past two years with the global pandemic, the new Australian cast — despite the obstacles — has been meticulously put together.

Mary is known for being stern, dependable, business-like and has been and always will be uniquely magical and loveable. Poised with elegance, charm and endearing confidence, Jones fulfilled the multidimensional role in spectacular form. From the moment her heels landed on the stage, to the moment she flew across the audience – yes, she flew “close your mouth, please, we are not a codfish” — she captivated the audience with her colourful personality and magical qualities.

Bert, played by Jack Chambers, was just as charming and presented his character impeccably. Born to be in the spotlight, Chambers is known for his work in theatre: Cosmo Brown in Singin’ in the Rain (Michael Cassel Group/Dainty Group/DAE/Lunchbox Productions), Link Larkin in Hairspray the Musical (DAE/Dainty Group) and more. Many will recall his appearance on TV on So You Think You Can Dance Australia – Season 1 – Winner (Network 10). With multiple awards and nominations such as Australian Dance Award (Singin’ in the Rain, 2017), Green Room Award (Singin’ in the Rain, 2017), Adelaide Fringe Award (UNTAPPED!, 2016), Helpmann Award nomination (Singin’ in the Rain, 2016), he also featured in Hugh Jackman’s The Man, The Music, The Show World Tour 2019 (AEG Presents/Dainty Group), West End LIVE 2013 (London) and 18th Annual Kennedy Center Spring Gala 2010 (Washington, D.C.).

Chambers delighted the audience with his sincerity, magnetism and enthralling dance capabilities. Much like Jones, his performance was breathtaking. From the opening prologue, through to ’supercalifragilisticexpialidocious’ – which demanded a multitude of intricate moves – he did not miss a beat. The fresh and charismatic choreography led Chambers singing from roof tops, tapping up walls, upside down on ceilings and was nothing short of spectacular!

The rest of the cast and crew were equally strong and polished, humorous and entertaining. Speaking to all generations, audience members related to characters such as George Banks, played by Tom Wren who, stern and stubborn, in the end softened; Winifred Banks, played by Lucy Maunder, committed wife and mother also served a subtle ‘Spoonful of Sugar’ for women’s rights; and the Bird Woman, played by Nancye Hayes AM, graced the stage with great anticipation. Jane Banks played by Amara Kavaliku, and Michael Banks played by Xavier Daher, delivered a strong and playful performance beyond their years.

Re-imagined from page to screen to stage, Mary Poppins was more magical as a live performance. The choreography for favourite songs such as “Cherry Tree Lane”, “A Spoonful of Sugar”, “Supercalifragilisticexpialidocious”, “Chim Chim Cher-ee” and “Let’s Go Fly a Kite” was not only entertaining (and delightfully demanding), but it also effortlessly tied the story from scene to scene. The sets and lighting were seamlessly cued, allowing effects to be executed with precise timing and showmanship to disguise transitions. The audience was left mesmerised by all the theatrics, and remained curious about how Mary Poppins still managed to take her tall hat stand from her bag, slide up the staircase and fly with her umbrella right before their eyes.

This triumphant theatrical experience is a must-see for 2022!

To experience the magic, view www.sydneylyric.com.au/mary-poppins for tickets and details.