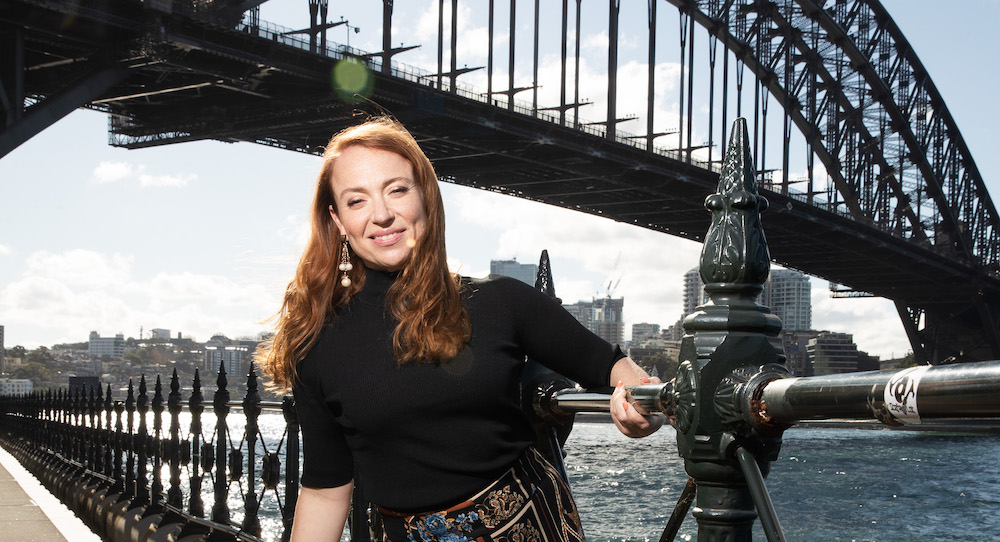 Sydney Opera House director of contemporary dance, circus and physical theatre, Olivia Ansell has been appointed Sydney Festival Director from 2022. This is a coveted position overseeing one of Australia’s premier summer festivals with a large budget and a widespread international cultural impact.

Starting her role in November 2020, Dance Informa was delighted to speak with Ansell in relation to how her background in dance as a performer and then as an arts administrator affects her vision and the challenges for the Sydney Festival in a post-pandemic era.

“It’s an honour to have been appointed to direct the Festival. Ever since I was 20 years old as a young artist, every single summer I can remember who the director was and which productions I saw and which works I was taken by. So it’s an incredible honor to be standing here now, 22 years later, being in the same role that blew my younger self away in 1998.

Every program, and each Festival Director, from Leo Schofield, Lindy Hume and most recently Wesley Enoch with his Blackout program, has left a cultural legacy and leaves their stamp on the city. And I couldn’t feel more proud to be mentioned alongside them, but also conscious of my responsibility at a time when the arts sector needs so much support.”

Can you walk us through the application process and your particular approach to the much coveted position with its weight of responsibility?

“I believe the panel started looking for applicants in January, and I was  approached to consider the role and come in for an interview, and that’s when the process started in earnest around February.

To be honest, I didn’t give it too much thought, as when I heard the news that I had been asked to apply, I was working at the Opera House and we were deep in summer delivery and presenting shows throughout the bushfire crisis here.

It’s funny. For some reason, being a dancer or a performer, we have that self-deprecating nature in the way we carry ourselves. I grew up in a family who loved a sense of humour, and being a bit cynical was a prized commodity. Also, being in a family of artists, you get used to rejection and knock-backs and the highs and lows that inevitably come with show business and the arts. It’s important to not take yourself too seriously, and it’s almost an imperative as an artist — you turn up to some audition or for something like the Festival of Sydney Directorship role to give your best, but also ready to take the rejection when it inevitably happens with a bit of stoicism. You know, even when I was presenting my program to the board of the Sydney Festival, I had that classical dancer mentality of, ‘I’m just here for the experience.'”

The presentation of my vision to the Board would have been the most important moment of the process because you’re sharing what you will paint across Sydney as a live extensive canvas. It was at that moment, I think, that the artist in me came out, saying, ‘Just do the audition for the experience and let your passion for Sydney speak through your vision.'”

How did you present your vision?

“What I think Sydney needs, and how we can carry on the legacy of the previous Festival Directors who have shaped Sydney to make the Festival what it is today and and also how we can take it new directions.

So the question of what can we do for Sydney must include how we respond to directing a Festival post-Covid, with international waters open or closed; looking at contemporary trends and contemporary society and guidelines within which we exist; and how we can make this festival one for all ages, tastes and demographic across Sydney, Western Sydney and Greater Sydney; and drilling down into what’s worked previously and what hasn’t been so successful and and how to tap into that.

I have to say I have the advantage of being a Sydney person. I’ve travelled a lot and travelled extensively internationally, but I’ve always come home. And so in terms of the Australian cultural landscape, I’ve worked in other states running festivals and things like that. But I have an innate sense of Sydney and what a Sydney audience likes to see.

I have been fortunate to have lived here; this is my home city. So yeah, I’ve had the benefit of being able to attend every Sydney Festival, and have gone to most events and really immersed myself in each director’s program and vision.”

What do you think the challenges will be curating an international festival in the brave new post-pandemic world?

“This is where, if my festival was this January, it would be extremely challenging. And that’s why Wesley Enoch is curating an all Australian festival this year, because he simply can’t have any international collaboration or presentation; the borders are closed.

In terms of 2022 and beyond, I think the challenges will be the uncertainty between now and March next year, in regards to which organisations stay buoyant around the world and which organisations may be forced to wind back or close. We are all hoping globally that the pandemic will pass at some point in 2021 so that 2022 will be like a new year and a new beginning.

But at this present point in time, none of us can guarantee that, so I’d like to think that we’ll absolutely be presenting big international moments for the festival across the performing arts and visual arts and new commissions and premieres and collaborations. And I do sincerely feel confident about that to the extent that I am also standing as are you, in one of the only countries in the world that seems to have really flattened the curve early in reopening.”

What do you think needs to be done to help rebuild and nurture our performing arts industry?

“I think that programs presenting around the country need to look at their current programming, and I know they are. And we’ve seen examples of commissioning funds, EOI (Expression of Interest) processes. We’ve seen examples of organisations modifying their budget expectations. The Opera House has launched an initiative called ‘From our House to Your House’ format, where we’re paying artists to perform with a free livestream to audiences globally.

So, the Sydney Festival is of course getting behind all Australian artists for this year’s 2021 Festival, which increases the chances, almost tripling the chances of Australian artists gaining access to being presented in the Festival. If there’s interstate tourism, that should increase local artists’ profiles with Australian audiences, which might knock on to regional touring.

If all arts festivals nationally profile Australian artists, that might mean in three years’ time audiences in Perth and Brisbane know some of the independent ‘smaller to medium’ Sydney artists a little better because of that awareness. If they all present local artists, we create awareness and hopefully touring. In the long-term, we can find innovative ways to seek out international commissions which are co-collaborations, collaborations with Australian and international artists. I’m talking about the future so that we can avoid artists feeling isolated from their collaborators and other parts of the world. Encourage touring innovative new work to mobilise things. We want to share universal stories.”

Are you able to share some ideas you’re hoping to include in the 2022 lineup?

“I don’t actually start in the role until November. I’m still involved with the Sydney Opera House. But of things I’ll try to make happen for Sydney will include the live music scene. We’ve lost so much of that, and I’m very passionate about it, particularly for Sydney. Our small bars and music venues were heavily impacted by lockout laws, and that has had a long lasting impact on the nighttime economy. I’d like to get behind that sector and the tourism sector to restore the nighttime economy and make sure that Sydney in summer is the place to be!

Sydney has one of the most thriving independent theatre sectors in the country. We’ve got the brilliance of Belvoir and Sydney Theatre Company and we’ve got the old Fitzroy and Darlinghurst Theatre and all these amazing small to medium theatre companies who are doing incredible work.”

Does your dance background give you a bias toward dance and live physical performance?

“I think if your background is dance, you’re inherently connected to dance, physical theatre, music and contemporary music. Because we go hand in hand with contemporary and experimental music. When you’ve grown up training in Bodenweiser in Chippendale, Sydney, and then spent time in New York, you talk about works from Steve Reich and Max Richter, Philip Glass. That territory of artists are the staples of the modern dance I grew up with.

Somebody once told me that choreographers make great film editors, because the timing and the rhythm we have within our body make us great editors. So dance and musical theatre and circus and music, to me, are very important languages.

I also have a background in theatre, which is inherently important as well, as is visual public art and engaging family audiences and audiences in typical spaces and looking at the canvas of Sydney and how we can reimagine it in summer.”

Are there any artists, or movements in general that the world has been under appreciating?

“I think diversity is really important. Wesley’s Blackout program is an astonishing program. I know that as the Festival Director Designate, we’ll look back and be so proud of him for bringing this First Nation commissioning to the Sydney Festival, and it’s something that I absolutely want to make sure is continued.

As well as the important vigil on 25 January. The vigil is here to stay hopefully in the festival and will stay until hopefully we change the date. I can’t wait for travel restrictions to lift. Look at our neighbours, look at the incredible visual arts of Southeast Asia, the dance that you see in South America and Africa. The performing arts and diverse artists and companies that we have been lucky and fortunate enough to have the ability to work with and invite to Sydney.”

If money and logistics were no object, who would you love to see headlining the Sydney festival in 2022?

“Gosh! That’s too much to imagine, but may well be the dream I have for the next three years!

I think a sharp ruler will need to come out each year, because my passion and vision will be skewered ultimately by money and logistics; they are keywords. It’s surprising how quickly equipment and the logistics that go into an outdoor event can evaporate any budget. So it’s about being clever, using our natural spaces, but equally a festival should have a sense of occasion so that when you drive through the city, you feel like the festival is on.

What can sometimes happen with festivals is they become theatre-centric with the events held inside, which is a shame, given we have the most glorious city with a stunning vista over Sydney Harbour, the beautiful Parklands of Western Sydney, the Cutaway at Barangaroo, so many beautiful vistas. So, for me, it’s about making sure the festival is as much outside as it is inside.

I really want to ensure that the dance community and emerging or established artists feel connected to the festival. I can assure you that even though I will have left the Opera House by the end of October, dance lovers should look out next year for something quite exciting in this space.”