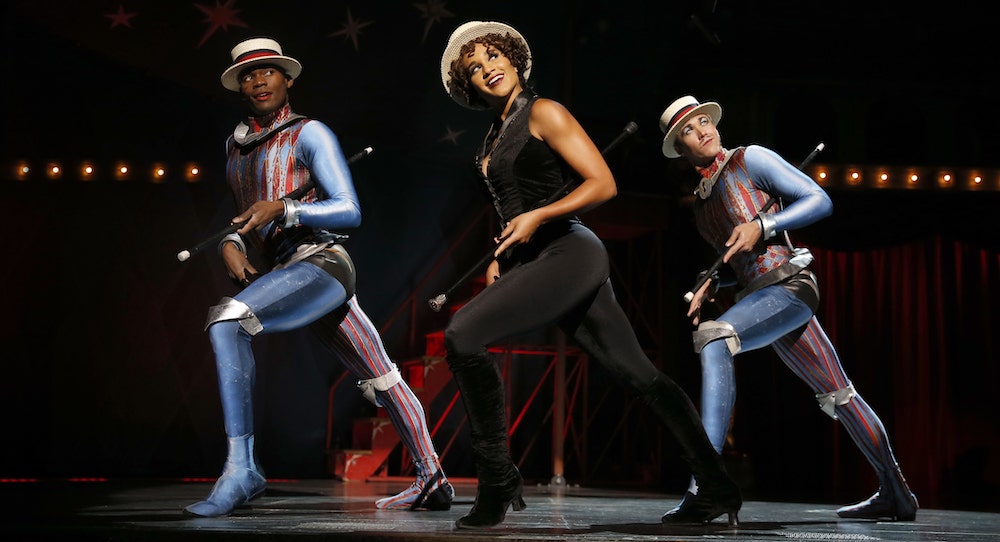 Producers John Frost and Suzanne Jones, along with Foundation Theatres and The Star, have announced that the Tony Award-winning hit musical PIPPIN will reopen the Sydney Lyric Theatre at The Star for an exclusive season from 24 November. Full of extraordinary acrobatics, wondrous magical feats and soaring songs from the composer of Wicked, PIPPIN is Broadway’s high-flying, death-defying hit Broadway musical.

This unforgettable new production is the winner of four Tony Awards, including Best Musical Revival, Best Direction of a Musical, Best Actress in a Musical and Best Featured Actress in a Musical. Hailed by The New York Times as “astonishing. A PIPPIN for the 21st century. Dazzling and awe-inspiring.”

With a beloved score by Oscar and Grammy winner Stephen Schwartz (Wicked, Godspell), PIPPIN tells the story of a young man at a crossroads in his life. Does he follow in the footsteps of his father, one of the most powerful men in the land? Or does he strike out on his own, to find his own ‘corner of the sky’? PIPPIN is a play within a play. The story is told by a travelling troupe of actors and acrobats (called ‘Players’), directed by the mysterious Leading Player. Like a vaudeville act, the Players both act out the roles of the story and speak directly to the audience.

This new production is directed by Tony winner Diane Paulus (Hair, The Gershwins’ Porgy and Bess). It features sizzling choreography by Tony Award nominee Chet Walker in the style of Bob Fosse and circus creation of breathtaking acrobatics by Gypsy Snider of the Montreal-based circus company Les 7 doigts de la main (also known as 7 Fingers). PIPPIN is noted for many Broadway standards including“Corner of the Sky”, “Magic To Do”, “Glory”, “No Time at All”, “Morning Glow” and “Love Song”.

“We’re thrilled to invite audiences back to the theatre to experience this magical show,” said Producers John Frost and Suzanne Jones. “We saw this astonishing new production of PIPPIN in New York where it was the most nominated Broadway show of the year, and it has gone on to thrill audiences across the globe. Now it’s Australia’s turn to enjoy the PIPPIN magic with this exclusive Sydney season.”

“Foundation Theatres is delighted to be reopening the Sydney Lyric in November with this brilliant show,” said Foundation Theatres’ Owner Stephen Found. “We are a proud part of the wonderful tapestry of venues, producers, artists, managers, technicians, crew and creatives that all combine to make magic on our stages, and we want to see them back at work. It’s now time to act to restore confidence in the theatre industry for theatre-goers to feel safe when seeing shows again and for theatre-makers to weave their magic. To all who love the live theatre experience, our message is clear: Help us to raise the curtain on Sydney’s theatres and reignite the creative industries in NSW. Join us for PIPPIN. As the players in PIPPIN tell us as the curtain rises: We’ve got magic to do.”

Matt Bekier, managing director and chief executive officer of The Star, said, “We are thrilled to be involved with bringing PIPPIN to The Star and welcoming theatre audiences back to our complex. We know Sydneysiders love live entertainment, eating out and enjoying all that The Star has to offer. Luxurious accommodation, the city’s finest restaurants, the coolest selection of bars are among the entertainment destination offerings guests can experience before and after the magic of PIPPIN.”

During the season of PIPPIN, the Sydney Lyric will operate in accordance with its Covid Safe Plan with the goal of ensuring that each patron’s experience at the theatre is made as safe as reasonably possible. The Covid Safe Plan applicable when performances occur will be made available on the theatre’s website.

PIPPIN will be presented at the Sydney Lyric Theatre at The Star from 24 November. For tickets, head to www.ticketmaster.com.au.