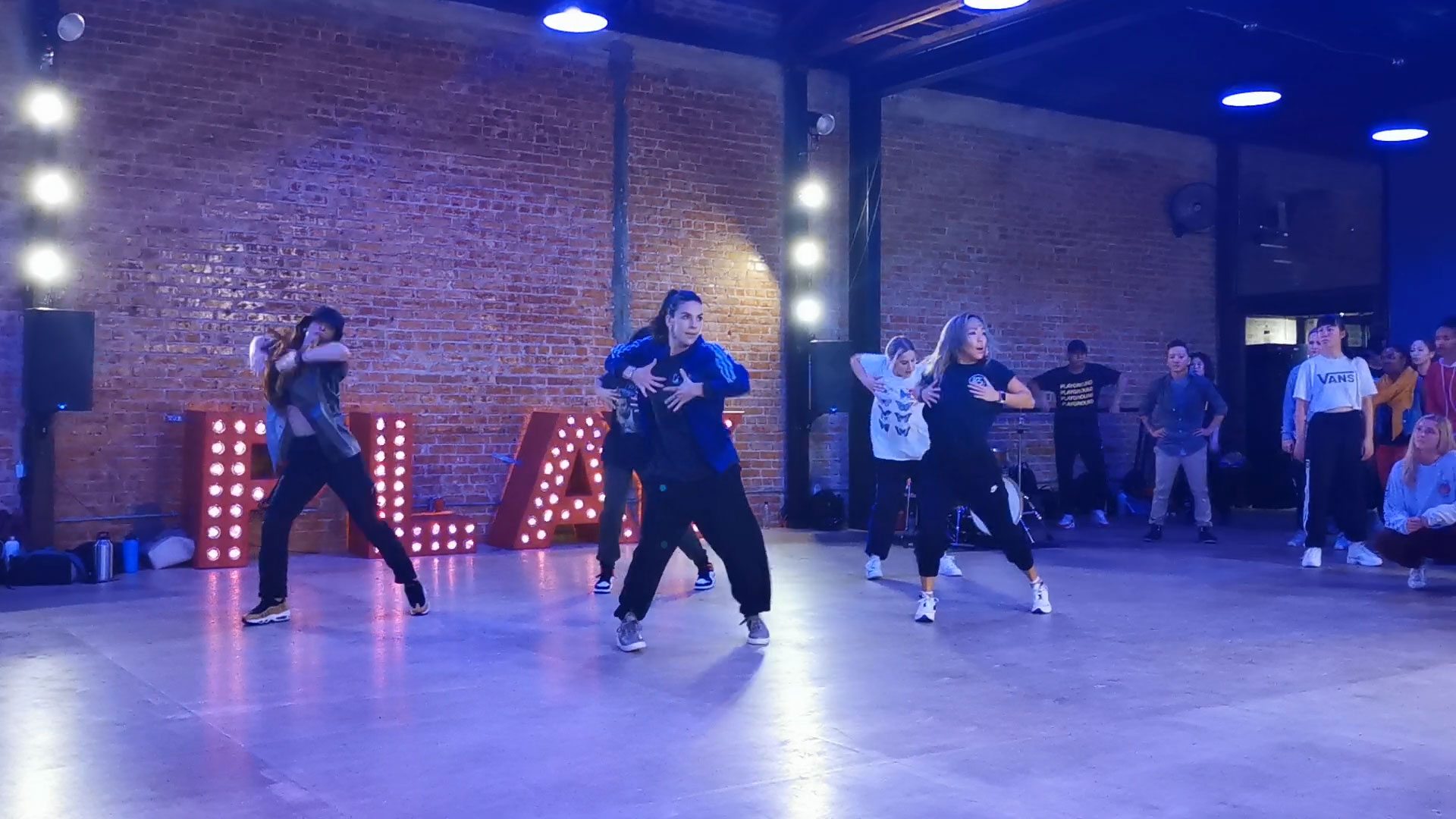 If you spend any time on YouTube, you will know the iconic red “PLAY” letters of Playground. The studio on Melrose, created by Kenny Wormald, star of Footloose; and Robin Antin, creator of The Pussycat Dolls, is anything but just another LA dance floor. With millions of views on YouTube and Instagram, and consistently sold out classes of up to 100 dancers at a time, the hip new space is home to celebrities, professional dancers and local novices alike.

“Literally, it’s like a playground for dance!” explains Antin. “It’s more of a playground than ‘the playground’,” laughs Wormald.

Antin came up with the name after being inspired by the fun opportunities presented by the blank space on famous Melrose Avenue of Los Angeles.

Wormald admits that he never had plans to open a studio, but when Antin asked him to look at the space and he found out it was on Melrose, he said, “Okay, now I’m in the conversation, now I’m interested! Melrose is a cool, really amazing place, and then you put a little dance studio in the mix, and it’s exciting.”

Antin adds, “It’s like no one would think to do that.”

“It’s a risk and challenge and it’s fun, but the class culture just took off,” explains Wormald, “and now the studio draws dancers from all over the world.”

But this isn’t the first time Wormald and Antin have worked together.

“Kenny and I have known each other since late 2002,” explains Antin. And Wormald laughs, “I used to be a sailor boy in the Pussycat Dolls shows.”

But all those years ago, Wormald caught Antin’s eye. “He was so cute and good-looking, and the best dancer,” Antin recalls. “He’s been in the dance industry forever and just done so well and had huge success. We both came from these great worlds of dance and success. But when we came together to do this, we were like, ‘Okay, he’s created all this time, and I’ve created all this time, but coming together to do a dance studio is a whole other thing! We were looking at each other like, ‘What are we doing?! We brought both of our worlds, which are different worlds, together and collided, to make something really cool happen.”

The studio, unlike most studios we are accustomed to, is boutique, in the fact that it’s just one large room, with a glass frontage to the street. But boy, there’s “a vibe in the room,” says Wormald. Such a vibe, in fact, that when the room next door became available, they knocked down the wall and expanded the space.

“All of a sudden, we went from 50 capacity to now about a hundred. Like literally, it just doubled!” exclaims Antin.

But Wormald explains that the grandeur of the large space, and the videography we’ve all been enjoying online, doesn’t take away from the community feeling. “As much as it is like the flashy kind of Instagram class, it’s very grounded,” he says. “Everyone is there to dance. It’s not a high-pressure thing. We’ve found a way to do the camera thing but still have it be about dance and respect the class culture. If you’re intimidated at first because you only see it online, when you go in there, you just dance and you have fun!”

Playground LA is known for fierce, sexy heels classes and hard-hitting hip hop, but the studio now also offers beginner classes and even fitness classes like cardio hip hop. “People just want to dance!” says Antin. “Honestly, cardio hip hop is so good. You have no choreography, and anyone can do it, and it’s the best workout ever.”

“There are all shapes, sizes, ages, everything,” adds Wormald. “We see all these people who aren’t trying to be professional dancers; they just come and have a blast. And it’s like they’re addicted to it now, and all their friends are coming now. They’re just living this moment for a second, and then they can go back to whatever their day was. It almost brings more joy to teach those kinds of classes, because you just see the people having a blast!”

But serious dancers are also progressing their career through the training from industry leaders at Playground LA. Wormald pays special attention to his “Playground Boys” whom he mentors, including Australia’s Charlie Bartley and Chris Tsattalios, both of So You Think You Can Dance fame back in Australia, and both who now teach at the studio. “A bunch of the Playground Boys are Australian! Charlie Bartley has been dancing with us and now he’s working with Usher!” Wormald explains. “They are all doing things that they always wanted to do, and it’s cool for them to have a home base or ‘playground’ where they feel comfortable. And I can give them an opportunity and hire them in all of the jobs that I do.”

“Kenny transforms the dancers,” Antin adds. “Like, honestly, they come in, and all of a sudden, they grow, grow and grow.”

Antin and Wormald are obviously relishing the opportunity to give back to the industry they love and to be involved in the day-to-day of a studio again.

“I don’t have an ego in the dance world,” shares Wormald. “I have a lot to give, which I didn’t even realise. But now with the Playground, I’ve realised that.”

“We want to see these young people crush it!” concludes Wormald.

Check out The Playground LA at www.playgroundla.dance and on Instagram.