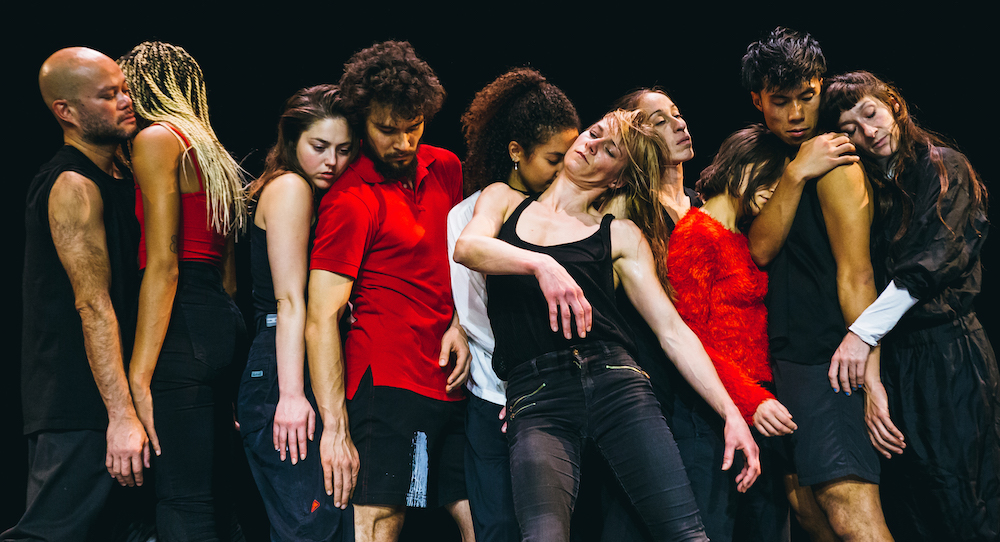 Frontiers, borders, limits…freedom. We hear these words thrown around. Weaponised, pathologised, sanctified. Yet, beneath the spectacle of polemic and the dichotomies of dispute, their meaning is often vague. Shifting, subtle and idiosyncratic. For an artist, this is manna from heaven.

Cue Dana Gingras, Canadian choreographer, co-founder of The Holy Body Tattoo, the woman behind Animals Of Distinction and the director of Frontera, a new work set to hit the boards at Carriageworks in January, as part of the Sydney Festival. As she says, “The question is: where does our agency lie? What is freedom?”

Within the encapsulated context of a dance work, these musings play out in the content, the form and the process. Whilst Frontera leans into the current fracas around identity and migration (and is a response to the febrile dramas of ideology playing out in news feeds, op eds and You Tube rants), it seeks to push through the noise of border security. “The piece functions on a personal, social and political level,” Gingras confirms. “You know, it’s the times we live in, and so we are looking at borders that include and exclude, but also the borders that we somehow carry within ourselves.”

Thus, rather than dwelling in the obvious, Frontera takes its 10 dancers, four live musicians and team of visual artists into what Gingras calls “liminality”. Indeed, she describes the creation of the work as being more like “an ecology” than a “top down power structure” where the choreographer tells, and the ensemble follow.

“We have worked in a very open and free way,” she elaborates, “and for me, it was really important that within the working process and the choreography, we were developing these skills of agency. So, having the dancers become an ensemble, but also maintaining their own sense of personality and identity.”

In practical terms, this means the work is largely co-created. The dancers contributed their own “lines of desire”, and the score was crafted in the rehearsal process with the company and Montreal based post-rock outfit Fly Pan Am. In addition, the visuals (by United Visual Artists) were weaved organically into the movement palette. Although this is not a new or unique way of working, Gingras suggests that, given the themes of the piece, it was required.

Yet, allowing individual agency in the dancemaking process is to flirt with indulgence and messiness. “It was very much on this spectrum of rawness, of wildness,” Gingras reveals. “I was very interested in this kind of unruly body. But then we have to make it cohesive; and so, when you’re also working with these visual artists [UVA] whose work is very minimalist and imposing, and suggests a kind of authority and power, finding a way to relate to this other partner means that you’re operating in this realm of both freedom and restraint.”

Therefore, within the work, classic creative tensions play out. Expression/discipline. Passion/purpose. Process/outcome. Gingras unpacks it thus, “We have sections of almost ‘algorithmic’ movement and then sections of a kind of wilder, more animal and furtive movement. So, there’s this sense of the movement seeking to go beyond itself, which means that it strains the edges of the piece because the dancers are really pushing into their own limitations.”

All of which begs the question: where are your borders, Dana? “For me, my life story is…born in a very small town on the west coast of Canada, then ending up in South America at the age of three, then leaving Argentina because of the Dirty War [1976-1983] and ending up in the UK, then coming back to Canada and not really knowing, culturally, where I belonged. So then, as an artist, I was always feeling like I was working from the edges and becoming fascinated by liminality and liminal space.”

In this sense, Frontera digs into the personal and, especially, into how the individual operates in the current cultural, political and technological milieu. Relating this to movement, Gingras expands, “Urban planning tells us to take this path or that path; but what happens when we find different lines of desire and we cut through something and find a different pathway? You know, as our dramaturg said, it’s like we’re forced to live algorithmically, as opposed to rhythmically.”

Here we return to the notion of agency. Like many of us, Gingras is concerned about the ways in which technology and the data it relentlessly mines may potentially affect us. “It’s like this unnerving feeling that we’re being subjected to unknown forms of power,” she worries. Responding to this, Frontera is searching for what she terms ‘untrackable spaces’.”

Perhaps, in the end, rather than being wild, what Gingras and the Animals Of Distinction are suggesting is that the frontier is not quite wild enough.

Dana Gingras and Animals of Distinction will present Frontera from 8 – 12 January, as part of the Sydney Festival. For tickets and more information, visit www.sydneyfestival.org.au/events/frontera.