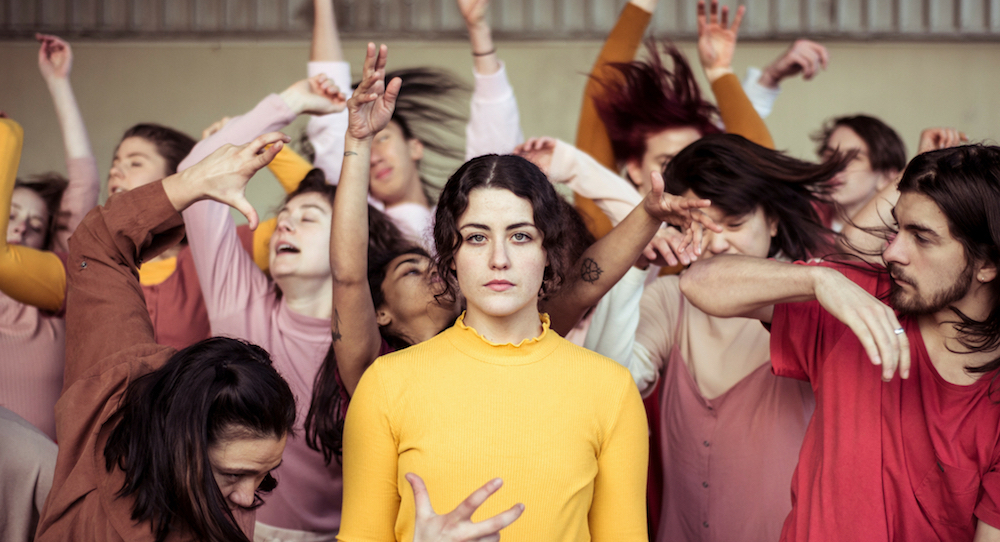 Stephanie Lake has been described as “one of the most important voices in contemporary choreography”, with “gutsy physicality and kooky poetics”.

With a number of impressive dance industry accolades, including the Sidney Myer Creative Fellowship in 2013, and the Helpmann, Green Room and Australian Dance Award, this unassuming woman seems slightly surprised to find herself with a 20-year career in dance and choreography behind her.

“When I was at VCA (Victorian College of Arts), I never imagined myself making a living in dance and choreography,” she reveals.

Dance Informa caught up with Lake in a busy Melbourne city street. She had just finished a meeting and would be heading to rehearsals after the interview to work on her latest work, Colossus, a work that warrants the name with up to 50 dancers on stage!

Lake remembers that from a young age, she had always enjoyed creating dance works, particularly on a large scale. “At VCA, I’d get as many students as possible to be part of my works; the more the merrier. I just love seeing lots of bodies on stage.”

Her first choreographic work, at the age of 22, was Love is the Cause thanks to a grant from the Australia Council for the Arts. “I was very excited about that work but realise now that I tried to put absolutely everything into it!” she shares.

Lake has danced with Chunky Move, with Gideon Oberzanek and Anouk Van Dijk, as well as for Lucy Guerin, Phillip Adams, Antony Hamilton and Byron Perry, to name a few, and she drew inspiration from each experience.

“I graduated into a very interesting time in Melbourne,” she says. “I could never have predicted it. There was this amazing wave of creativity and energy in the contemporary dance world, and I was just lucky to have graduated into that time.”

Various commissions came, including Mix Tape for Chunky Move, which was a big success, as well as works for Sydney Dance Company, all of which were high points for this bold, up-and-coming chorographer.

So what is it about Lake’s work that continues to attract affirmation from the dance industry? She struggles to answer. “I honestly don’t know. Perhaps because the works resonate with the audience? I always think about how I can connect with the audience when making a work.”

And looking back over her choreographic career, does she see a recurring theme through her work? She responds thoughtfully, recognising certain obsessions that keep returning. “I seem to be drawn to the slippage between hyper-organised unison with intricate patterns, and a wilder animalistic chaos. There’s often a juxtaposition of chaos and control.”

One common thread woven throughout her works is the ever-present emotional human element. She is astounded by the fragility and delicacy of the human body. ‘This relationship of bodies in space, the human condition, mortality and decay,” she describes as to why she loves seeing lots of bodies on stage.

She continues, “I find society at large fascinating – the urban landscape with masses of people; the diversity is staggering, and yet there’s structure and we manage to organise ourselves despite an apparent chaos. And then there’s the question of the individual in the midst of all that chaos.”

The attraction to use large numbers of dancers creates the potential to fluctuate between the macro and the micro. “You can create grand complex patterns with the whole cast, then decide to zoom in and focus on just one or two dancers.”

When the call went out from the Arts Centre Melbourne via the Take Over! Project for a Melbourne Fringe Festival commission, Lake thought, “Okay, maybe this is the time to do something big.”

She explains, “It is a huge logistical undertaking to coordinate a cast of this size. I needed the backing of a big institution like Arts Centre Melbourne to make it happen; it’s both daunting and exciting!”

So what can we expect from Colossus? There will be a cast of 50 dancers, half from VCA and half from Transit Dance, another Melbourne vocational dance institution, who will all move in complex unison as well as wild individuality.

“These young dancers are just incredible,” Lake says. “They are curious and work so hard.”

In addition, she says, “There will be amazing light and sound — Bosco Shaw and Robin Fox — with costumes designed by Harriet Oxley. The joys of collaboration!”

What’s coming up next for the Stephanie Lake Company? Nothing less than taking a Pile of Bones (2017) on tour to France, having been invited back to perform in the National Chaillot Theatre in Paris next year. Lake originally toured her work, DUAL, to Chaillot in 2015, and has kept in contact.

“It’ll be great!” Lake says. “2019 marks the 70th anniversary of the signing of the Declaration of Human Rights at Theatre Chaillot, so it’s a very significant program to be part of and an enormous honour.”