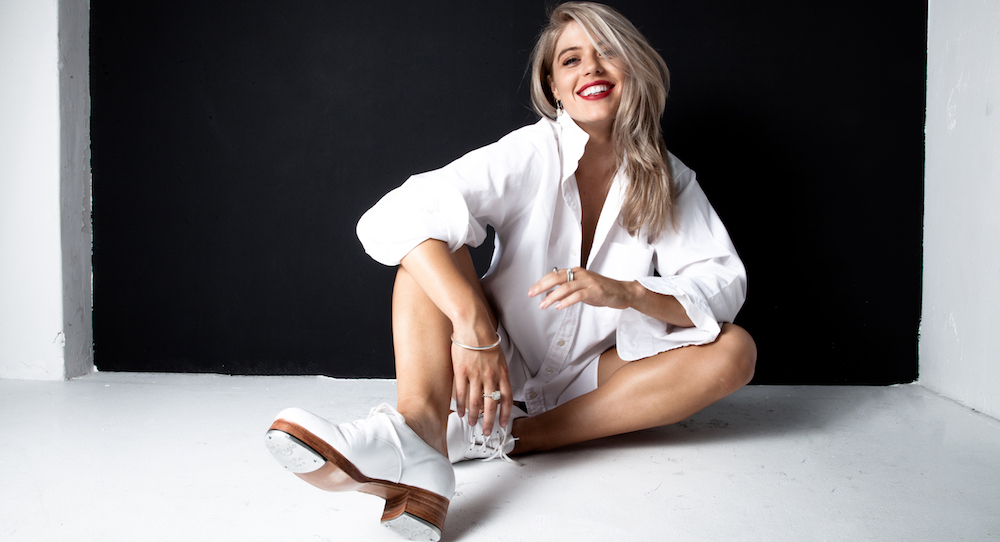 Aussie tap dancer on the rise, Brianna Taylor, is living her dream as the first Australian to join Los Angeles-based Rhythmatic Tap Company founded by Nick Young of So You Think You Can Dance fame. This is no small achievement for Taylor, a country girl from Far North Queensland who has taken the stage in Los Angeles for the company’s latest production of Contrary to Popular Belief at the El Portal Theatre.

Taylor, now 26 years old, started tap dancing at the young age of four, and knew early on that she was born to dance. “I’ve always loved tap dancing,” she shares. “I feel very connected to the percussive element of tap. I love the rhythm! To be honest, I didn’t actually realise the possibilities growing up that it could be a career. I just did it out of a love for the artform, and then as I got older, more opportunities came up.”

One of those opportunities is the honour of being a Capezio athlete. “I’ve been with Capezio for about a year now, and I absolutely love the company and the brand,” she says. “It’s really important to me to be truthful to myself and what I believe in. I have always worn K360s, and I think it’s the best shoe.”

When talking to Taylor about Rhythmatic Company, it’s clear she’s not only excited about being part of Young’s latest work, but she also has a lot of respect for what he is accomplishing in tap dance. “He’s very clever artistically, so I’m really stoked to be a part of that creation,” she says of Young’s work. “His style is amazing. He incorporates contemporary as well as tap, and is storytelling through rhythms, so our show has a story, meaning and purpose, but there are no words. It’s all rhythms, music and feeling, and its very artistically fulfilling to perform.”

Getting her overseas break is a credit to Taylor’s ability to market herself and network within the tap dance industry. “It was a couple of years ago that I performed with Chloe Arnold’s company, Apartment 33,” she recalls. “That opportunity came about from going to America and putting yourself in front of choreographers and doing people’s classes and making connections. Chloe offered me a scholarship to go to a Syncopated Ladies Boot Camp in Chicago, and from there that was almost like my audition for the company. So, it’s just about saying ‘yes’ to as many opportunities as you can and having that positive mindset and things will come up.”

Similarly, having a social media presence led to an invitation from Young to join Rhythmatic. “Nick actually reached out to me through Instagram, which says a lot about the power of social media, promoting and marketing yourself and using it as a tool to connect with people in the scene,” Taylor says.

Paving the way for female tap dancers is also of importance to Taylor. She was one of the first females who joined the cast of Raw Dance Company’s production of Untapped for its New York season, and this was a career highlight for her. “That show had been going for about 10 years, and being one of the first females in the show was something to be super proud of,” she shares. “We definitely want to keep pushing these female roles and creating new opportunities. I feel like it’s starting to change, and we’re seeing a lot more females trying to create groups and more female presence on social media and role models like Sarah Reich and Michelle Dorrance do amazing things. I think it’s starting to get a little bit more even for sure.”

Later this year, Taylor is excited to be returning to Europe to once again perform in Mickey’s Christmas Big Band show at Disneyland Paris. “Dancing at Disneyland is a bit of a childhood dream for me, so I loved the experience,” she reflects. “It was actually amazing doing a different style of tap than I’m used to. A bit more classical and Broadway, so it challenged me as an artist and made me grow. Even though I’ve ticked off so many things on my bucket list, I still feel like there’s so much more to do. I’ve done a lot of touring and performed in different shows, but I’d love to create my own show or my own company and give back. I feel a responsibility to give back, especially to the younger ones in Australia and create opportunities for them as well.”