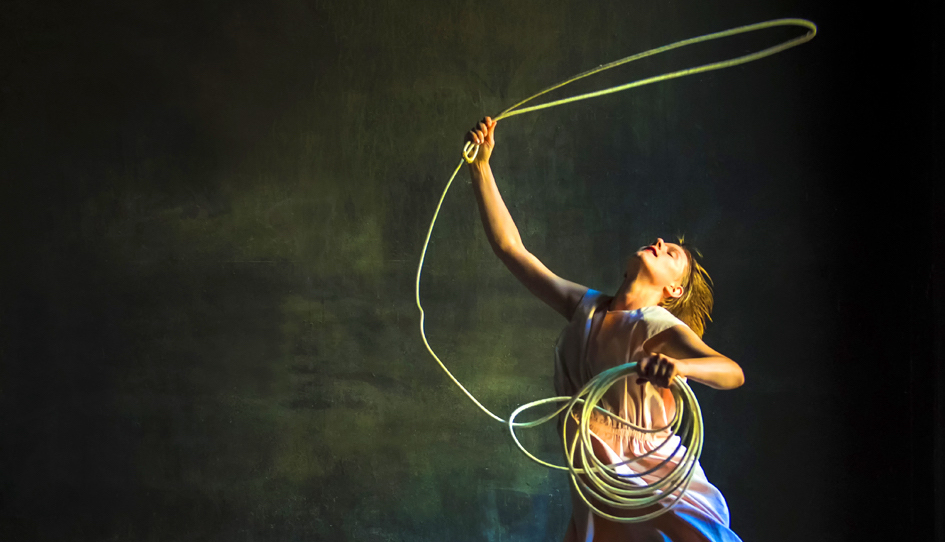 “I take great pride in failure,” Phillip Adams declares, with more than hint of provocation. “I allow myself to take a bullet and enjoy being the punching bag. It’s where I’m at my peak.”

Since he made his first work back in the late 1990s, Adams has been one of the most daring, playful and difficult to pigeon hole presences on the national dance stage. Blending high technique, contemporary expression and equal passions for visual art and film, he has roamed conceptual and theatrical terrains with a sense of elastic adventure, driven by a combustible mix of animal urgency and laser intellect.

‘EVER’ costume fittings with Phillip Adams and Akira Isogawa. Photo courtesy of BalletLab.

That we find him and his company, BalletLab, now resident in the high ceilinged surrounds of South Melbourne’s Temperance Hall is not merely a beautiful kind of irony but entirely appropriate for a man who seems ready to close a circle and, simultaneously, to shed all extraneous clutter. “Everything must go in order to be advanced,” he says, a sentiment not far removed from the Protestant puritanism that drove the late 19th and early 20th century temperance movements.

If at times it sounds like Adams is nearing some kind of destination, a new home ground, his upcoming Melbourne Festival work EVER is being framed more like departure than arrival. As he declares, “It’s my first ‘ever’ to be framed in this building; so I called the work Ever, because it’s a cycle, a loop. Like the music.”

EVER is a two-act work, the first accompanied by John Adams’ Shaker Loops and the second by Richard Strauss’ Metamorphosen. More than that, it is an attempt to “glide across the surface” of both minimalism and romanticism and indeed will be what its creator describes as his first “dance work” in years.

“It’s been a long time since I made a pure dance work, so it’s a shock,” he elaborates. “It’s radical, but it’s also a reminder to my audience and to my body. I need to touch that again. I need to go home, visit mum and dad, visit the family and that portrait of American culture that I was brought up on. I need to see the cornfields of Iowa.”

The Americana reference here is deep and deliberate, from the lasso girl promotional image to the work’s Quaker/Shaker themes. For Adams, however, this is not merely an aesthetic nod but instead a conscious act of personal reconnection.

“I’m 52, and I was brought up on a steady diet of television and Americana,” he reveals. “So, when I think about my induction into dance as a younger man, it was in a post-modern conversation with American dance history. I was kind of riding the last bus out of that, the Philip Glass and the Laurie Anderson’s and the more minimalist conversation, before it got really jazzy in the ’90s.”

In its choreographic form, EVER re-imagines the period of Adams’ time in New York in the late ’80s. “I’m traversing back to that poignant moment of my dance education,” he says, “and 30 years later, how will I respond?”

Taking aside the nostalgic impulses of a 50-something, EVER embodies a very specific re-visitation of the music of Shaker Loops. “I danced to that music in a choreography by Nanette Hassall when I was in Danceworks before I left for New York,” Adams recalls. “So I have a memory of it, it’s in my DNA. So, the beauty of the girl with the lasso and the spirit and the freedom is in my body as much as the new choreography I’m making now.”

The spirit to which he refers is, he contends, part of what we now understand as the spirit of American expansion and the doctrine of Manifest Destiny that underwrote it. “The fervour of the Americans, and the west in particular, is about modernism and space,” Adams enthuses. “Calling, or lassoing in, the modern history of contemporary dance is very relevant to space, and the Americans had a lot of it. We can trace some of that back in the roots of modern American dance history. Martha Graham, et cetera.”

Within this vision of the once wild west burns an alluring optimism, the hopeful gaze of modernism peering into the future and imagining an ideal world. “I was brought up in a modernist house,” Adams explains. “The way I structure or believe in a society is through modernist values, in that it’s freedom for all to express an open passage to what is a perfect utopian enclave. The cultural dream.”

And yet, when Phillip Adams BalletLab finally takes to the stage at its new headquarters this October, the company will be offering more than a prayer to a bright, futurist fancy. For now, BalletLab finds itself ensconced in a large 1861 building dedicated to an opposite spirit, namely that of abstinence.

‘EVER’ costume fittings with Akira Isogawa. Photo courtesy of BalletLab.

Of course, Adams is all over this. “When you think about it, the word ‘temperance’ is really avant garde because it’s about restriction and focus. It’s about non-distraction. Now, I’m a very easily distracted person, and I distract others, but with EVER, you experience a simulation of a Shaker barn through a very minimalist conversation.”

Thus, despite its citation of “wild west” motifs and the breezy bustle of modernist dreaming, the work is also a pared down and austere act of disciplined reverence. As Adams says it, “I desire to restrict the viewer’s capacity to get outside. I’m trying to get the focus down to the singular through the medium of repetition. My challenge is to present the entire experience in one.”

For Melbourne Festival audiences, this will be encapsulated in one instruction, which Adams insists he will collapse into the form of a simple sign. Black lettering on white paper: please observe the silence.

Phillip Adams BalletLab presents EVER at the Melbourne Festival 6 – 21 October. For more information and to book tickets, click here.