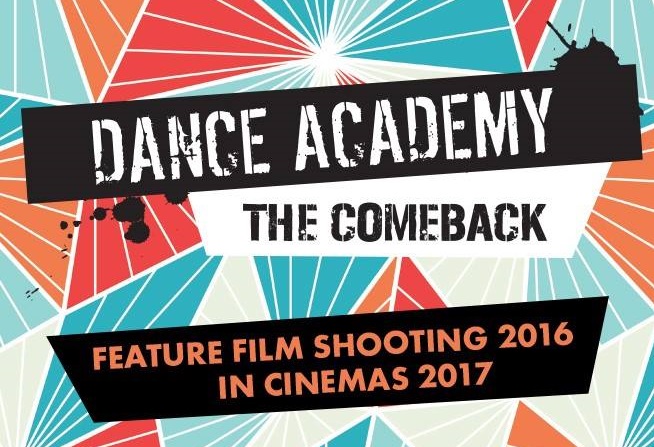 It’s not due to be released until 2017, but Dance Academy: The Movie already has us excited. Currently shooting in Sydney before moving production to New York, the feature film is the first to come from a TV series that has caused a huge stir worldwide. Dance Academy has twice been nominated for Emmy awards, has spawned hundreds of fan sites and is now screened in over 160 countries.

Dance Academy: The Movie is the story of Tara Webster (Xenia Goodwin). Destined to become one of the top dancers of her generation, the young performer was set back by a devastating injury. Now, against all odds, she is making a comeback, and will soon discover what it really means to define yourself by your dreams.

Celebrated Australian dance artist Sarah Boulter has been working as choreographer on the feature film, creating some prominent scenes which take place at “a crucial point” in the script. Whilst not being able to give away any juicy details, Boulter says she has had the pleasure of working with the lead actors and has created something they are all proud of.

“It has been an absolute pleasure working with such a brilliant creative team,” says Boulter. “Samantha Strauss’s script for the film is absolutely breathtaking. Jeffrey Walker, the director, has such a great vision and produces work that is edgy and captivating. As we know, the actors all bring different qualities to set, which I feel has been really fun to choreograph for.”

To top off this stellar line-up, it was recently announced that Miranda Otto has been cast in the role of Artistic Director of the National Ballet Company, Madeline Moncur. Otto’s character is responsible for the new direction of the Company, including choreographing its new works.

An international movie star, Otto will no doubt be a huge drawcard for the production. The award-winning actress has appeared in The Lord of The Rings, The Daughter, The Thin Red Line and Homeland.

“Miranda Otto is one of my favourite actors on the planet,” says creator and writer Samantha Strauss. “I can think of no greater Artistic Director – she is glitteringly beautiful, formidable but also brings a wonderful humanity to this key role.”

Boulter is confident that the film will live up to the expectations of diehard fans. “For all the fans of Dance Academy, this is going to be 10 times better then the series,” she shares. “We are now dealing with young adults who can draw on life experience. From a dance perspective, there is so much more detail and excitement in the scenes. The actors are also dancing so much better due to their maturity.”

One of Australia’s most sought-after choreographers, Boulter is the perfect fit to create the dance scenes in Dance Academy: The Movie. Her credits include all three Australian seasons of So You Think You Can Dance, Giggle and Hoot, and Mayor International Congress Awards representing Sydney Dance Company. We couldn’t let the opportunity pass without asking her for some advice for young choreographers wanting to work in film and TV.

“Immerse and educate yourself in your craft,” she says. “Take class from as many different choreographers as possible. Take risks. Never settle for the first choice; there are thousands of possibilities when creating. Ask questions and advice from your mentors. You can never stop learning, ever!”

Stay tuned to Dance Informa as we bring you updates about Dance Academy: The Movie!