A celebration of 20 years touring the world to sold-out arenas, Michael Flatley continues to push the boundaries of Irish dancing in this latest production, Lord of the Dance Dangerous Games.

The storyline is a well-known battle between good and evil. Each scene is established through the use of large screens and quality video production. The stage backdrop is easily transformed from a mystical land of hills, waterfalls, unicorns and fluttering butterflies to a red, steamy, erupting volcano and even larger-than-life holograph of the evil Dark Lord.

Connecting the storyline is the Little Spirit, played by Jess Judge, who you could be forgiven for thinking is an amazing contortionist straight out of a Cirque Du Soleil show. Other segments included performances by a soloist singer. A highlight was two beautiful musicians playing the fiddle, Giada Constenaro Cunningham and Eimear Reilly. In their sequined dresses, they commanded the stage with their furious playing and had the audience clapping along. 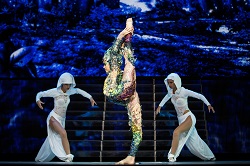 The talent of the two lead male dancers was evident, showcased in an Irish dance battle. Dark Lord, danced by Ciaran Plummer, and the Lord of the Dance, danced by Morgan Comer, were both quick on their feet performing a hard shoe sequence. Plummer had the challenging task of performing in an armour type suit depicting his villainous character. It was clear that Flatley had passed his sense of showmanship, confidence and bravado to Cromer, who many times throughout the night after a challenging dance sequence would punch his fist in the air to rev up the audience applause.

While the male dancers performed hard shoe, the female dancers predominantly performed soft shoe. With their long flowing hair and anything but traditional Irish dress, the talented group of dancers had boundless energy and were light on their feet. They even surprised the audience with some unexpected sexy choreography and costumes.

Flatley couldn’t resist making an appearance… that is, on the big screen. Making his presence known, there was not one, but three larger-than-life Flatleys performing simultaneously with clever cross rhythms, which delighted the audience.

In Dangerous Games, Flatley continues to provide an amazing forum to showcase the talent of Irish dancers and reinvent this style of dance. As the creator, producer, director and choreographer, the secret of his success that he shares with the audience as the show opens are words to inspire us all: “If you have a dream and are willing to work for it, you can have anything in the world. Nothing is impossible!”