After winning the coveted Gold medal at the 2014 Genee International Ballet Competition in Belgium, Kiwi dancer Vida Polakov is on a roll. She’s now taken the top spot in the Supreme B category (16 -19 years) at the Alana Haines Awards (AHA) – the Southern Hemisphere’s largest ballet competition, which this year attracted over 400 entrants. Following her win, she travelled to the USA to compete in the Youth America Grand Prix (YAGP) where she was made a very special offer. Currently a student of Sydney’s Tanya Pearson Classical Coaching Academy, this young dancer looks set to have a wonderful career in dance.

How did it feel to be announced as the winner of the 2015 Alana Haines Supreme B?

“I didn’t see it coming and didn’t expect it at all, so I was very surprised when they called my name. Even though we had rehearsed the bows before the curtain went up, I completely forgot what I was supposed to do. I was quite overwhelmed with emotion too, because I was so happy that both of my parents were in the audience to see me being awarded 1st place.”

Which solo did you enjoy the most and why?

“I performed the Giselle variation, which is a quite difficult, but I had practised it for awhile before the competition, so I had the steps in my body and was able to completely wrap myself up in Giselle’s character. I absolutely love the character of Giselle, and I feel so comfortable putting myself in Giselle’s personality. When I’m on stage, the music just fills me up and I feel so light and free in that character – it’s such a beautiful role.”

How long did you train for the AHA?

“I didn’t have any difficulty choosing which variation I wanted to perform, so I began working on the Giselle variation at the end of last year.” 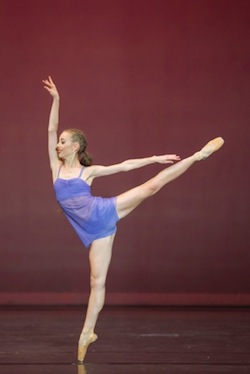 Where in NZ did you train before moving to Tanya Pearson?

“In New Zealand I trained at the Thames Hauraki Ballet Theatre with Pauline Germon for about six years. In my last couple of years before moving to Sydney, I did class at the Mount Eden Ballet Academy every Saturday with Melinda Palmer.”

What is a typical day in Sydney?

“I like to get up quite early, even though I live a five minute walk from the studio; I take my time getting ready. When I get to the studio, at 8:30am we have a stretch and limber class or Pilates for an hour, then straight afterwards we have a technique class with Lucinda Dunn. After that, each day is a bit different – we alternate between a pointe, repertoire or rehearsal class and some days we have contemporary, pas de deux, character or coaching. Most days finish around 4:00pm or 4:30pm. When I get home I always feel like collapsing on my bed, but I try and fit in a few hours of schoolwork each night.”

Did you enjoy your trip to the YAGP, and what was it like competing there?

“YAGP has definitely been one of the best experiences in my life! The schedule was quite busy, trekking across the city to and from different studios and theatres, but the opportunities and exposure to different teachers and directors was incredible. I was more nervous than I’ve ever been before I went on stage, because I knew that there were so many important people sitting in the audience. All the other competitors were so friendly and, of course, inspiring. I’m going back to Sydney now with a new work ethic, goals and a desire to be a better dancer!”

Where in the world has your dancing taken you so far?

“A couple years ago, I never would’ve known that my dancing would have taken me to where it has so far. I’ve danced on stage in New Zealand, Australia, Belgium and New York! I can’t wait to see where I go next!”

What has been your favourite overseas experience and why?

“I think Genee because it was such a nice experience that was spread over nearly a week. My favourite part of Genee was learning the commissioned variation from Ricardo Amarante in such a short space of time and getting it polished for the stage. I also really loved staying with all the competitors and becoming like a little family by the end. It was such a supportive atmosphere to be in, and of course the highlight was dancing in the finals at the Opera House with the Queen of Belgium in the audience.”

What companies or choreographers would you love to work with?

“As I have learnt at the Genee, AHA and YAGP, working with any choreographer is an amazing opportunity, as each of them offer new and different experiences.” 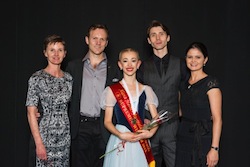 Who or what inspires you?

“One of my biggest inspirations is Lucinda Dunn and I feel so lucky to work with her every day. The energy she brings into the room inspires me to work harder every day. She is such a beautiful person to work with and I am so grateful to have her as a mentor and teacher.”

What do you do when you’re not dancing?

“I love relaxing at the beach and swimming. I also love to cook when I have spare time because it’s really satisfying.”

What is your ultimate dream?

“My ultimate dream is to become the best dancer I can be and perform for audiences around the world.”

Have you had any injuries? How do you avoid them and stay healthy?

“I haven’t had any major injuries so far, I’ve only had small injuries in my feet which have only taken me out of ballet for a couple weeks at the most. I find ice baths really helped my feet heal faster and I like to get lots of sleep to help my body heal.”

What is next for you over the next 12 months?

“I was offered a contract with the West Australian Ballet at YAGP, which I’ve accepted and will begin in August. In June/July I am doing the American Ballet Theatre’s Summer Intensive in New York.”