When the SS America first sailed from New York to London in 1934, Caroline O’Connor was not on the passenger list. Indeed, the Irish-Australian performer had to wait another 28 years just to be born. Only now, 81 years after the show’s Broadway debut, does she get to climb aboard Cole Porter’s tap crazy cruise liner as Reno Sweeney in Anything Goes.

However, there is no doubt that O’Connor wishes she was around in the 30s and 40s, as opposed to the Sydney of the 60/70s. “When I was growing up in Rockdale as a little girl of Irish parents singing show tunes I didn’t really fit in,” she recalls. “Everyone was in their denim shorts and thongs and wanting to go down to Cronulla and I wanted to stay home and listen to Doris Day.”

Her passions were no doubt stoked by her parents deciding to send her to Irish dancing classes. Tap, jazz and ballet lessons soon followed and a life on stage beckoned. “Secretly, all of my childhood, I’d listened to musicals on my parents’ record player; and I’d sing along to them. I didn’t tell anyone though. It was a big, secret passion that I had.”

When the time came she took herself off to London to study at the Royal Ballet School and it was there that her private passion burst out of its suburban bedroom. A trip to the West End to see Oklahoma! proved pivotal. “I’d bought myself a five pound ticket in the nosebleed seats and I fell in love with it.” A couple of years later a role in the same musical lit the fuse on what has been a phenomenal and varied career on stage and screen. 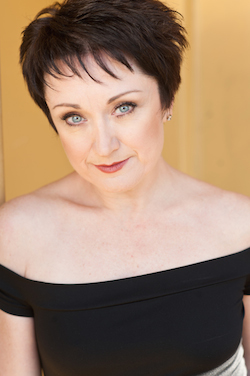 Caroline O’Connor, who plays Reno Sweeney in the Australian Tour of ‘Anything Goes’. Photo by Kurt Sneddon at Blueprint Studios.

These days, following West End and Broadway success, two Oliver Award nominations and Edinburgh Fringe First, Green Room and Mo Award wins, Caroline O’Connor has already ticked off a good portion of the ‘triple threat’ wish list. This month though, she gets to revisit her dream of the 30s and 40s when Anything Goes sets sail from the port of Melbourne for an extensive east coast capital run.

“I think there’s something to be said for nostalgia,” she says, “but also you can’t get away from the fact that Cole Porter was a brilliant songwriter. He was also one of those people who was a bit cheeky. He was naughty and some of his lyrics are very naughty.”

Adapted from a work by P.G. Wodehouse and Guy Bolton, Anything Goes includes Porter classics like I Get A Kick Out Of You (which O’Connor will perform in this production), You’re The Top and Let’s Misbehave. As O’Connor describes it, “It’s clever and fun. Almost mathematical. But it’s also a farce, which is the old way of doing comedy.”

For her and many others though the lure is the sheer style of the era. “We get to see some glamour,” she argues. “People don’t behave in that way anymore and it’s wonderful to observe the various characters. Then again, we haven’t had a tap musical in Australia for about a hundred years. It’s been a long time since an audience sat there and watched a whole company sorta tap. It’s full on.”

Indeed, since she began her career, O’Connor has rarely needed to brush up on her tap skills. “All that training I did and there’s been, like, two tap shows in thirty years. This one will be the third,” she laughs. “But the rhythms are absolutely fascinating to me. That you can make that sorta noise with your feet excites people. There’s something about banging your feet on the floor that just gets everybody going.”

For all of its apparently straight forward technique, tap is also renowned for its exactness. “It’s a little bit more complicated than just putting on some noisy shoes,” O’Connor reveals. “The execution is difficult. It’s extremely technical. It can be simplified but when you start doing intricate rhythms it becomes very tricky.”

As an example she cites the ‘nerve tap’. “It’s when you put your foot out to the side and you shake your leg as fast as you can with your tap just tipping the floor. You can get a ridiculous amount of taps in doing that.”

When you put this in the context of an eight show a week schedule and factor in the physical rigours of high energy dance numbers, it’s easy to get a sense of the challenge that awaits Caroline O’Connor and her ship board buddies, who include Todd McKenney, Wayne Scott Kermond and Claire Lyon. Dance may typically be a young person’s pursuit but, as O’Connor likes to jest, “All I can say is that make up and wigs are marvellous inventions!”

For tickets and more information about the ‘Anything Goes’ Australian tour, visit www.anythinggoesmusical.com.au.

Photo (top): The Australian Tour Cast of ‘Anything Goes’. Photo by Kurt Sneddon.