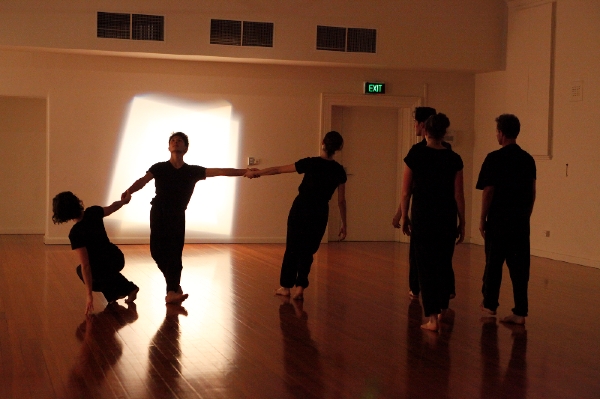 Love is blind – or is it? In this work, the first in a series of works exploring the intimate relationship between dance and music, Australian choreographer Russell Dumas considers how senses and emotions are affected by what is seen and what is heard; whether it is possible to separate sound from sight at all or if, in fact, what we see is first shaped by what we hear.

The first half of the work takes place in the downstairs Sylvia Staehli Theatre with minimal light, the movements of the dancers visible but obscured. The Schubert song cycle, Winterreise (Winter Journey), to which the work is set, is full of pathos and tragic beauty, providing worthy inspiration for the dancers. The unfolding of the various choreographic sequences appears highly ordered, almost linear, becoming increasingly intimate.

While appealing in its own right, the first section largely serves as necessary context for the second and final half of the work, during which the work’s conceptual complexities emerge. This section takes place in the comparatively well-lit upstairs studio following a small interval and is almost completely staged in silence. The choreographic sequences are deliberately very similar to those in the first section, and Dumas invites us — in more ways than one — to see the dance in a new light.

The ideas in this work are certainly worthy of the treatment Dumas has given them. It was an insightful experience to view the two parts one after the other — I enjoyed the movements as a beautiful, silent, unfolding vision; as a dance with its own in-built pace, the dancers’ breath and gravity acting as my only metronome; and as a dance haunted by my memories of the song cycles of the first act, differing largely because of the dancers’ altered interpretations of the work. It is interesting to note that Dumas at one stage considered providing the audience with headphones so that we, but not the dancers, would hear the music, suggesting that the extent to which it is possible for artists themselves to perform a dance such as this without being affected by the context which music offered has indeed been playing on Dumas’ mind.

It is understandable why Dumas chose to structure his work in two parts and stage them in two separate performance studios. There is a definite sense of duality suggested by the relationship between sound and sight in this work and Dumas’ personal interest in the concept of time, as a non-linear entity as in Japanese Noh no doubt made that aspect of the work especially appealing to him. At times, however, the format proved somewhat clumsy. Dumas was compelled to explain some of his ideas to the audience prior to the beginning of the second section, and even at this stage in the process, Dumas seemed unsure as to how to suggest the presence of our past experience of music (as heard in the first section) in the unfolding context of the silent dance — he ultimately opted to re-introduce the music in the final sequence. Although this created quite an endearingly informal atmosphere, akin to attending a ‘work in progress’ session, one could not help thinking that perhaps such interruptions would have proven unnecessary had Dumas chosen to stage the work in a single studio, fading out and re-introducing the music. The sense of duality which Dumas clearly wanted to suggest could still have been maintained and is itself already suggested in the themes of the work.

Love is Blind is nonetheless a thoughtful, deceptively simple work which, despite its flaws, is carried by Dumas’ commitment and attention to the core concepts of emotion, sight and sound at its heart.