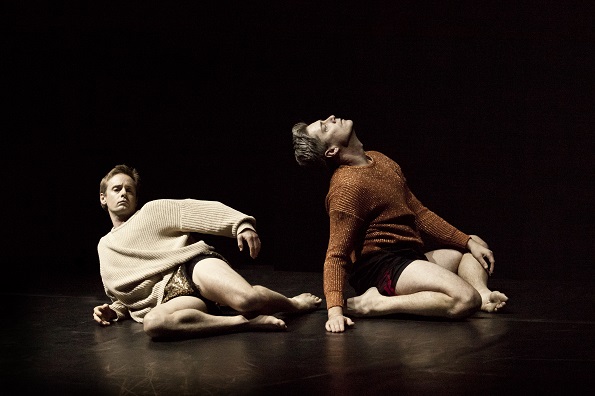 It has been two years since Vertical Shadows staged a production, the last being the critically acclaimed On The Rocks, so naturally audiences and critics alike were champing at the bit to see the company’s next work.

Artistic Director and choreographer Stephen Agisilaou has crafted a visual feast with The White Prince.  From the moment of arrival at the theatre, the audience is enchanted by the vast space, the haunting music and the billowing incense that weaves its way up to the heavens from church pews on stage.

The White Prince is driven by the story of two brothers who are heavily influenced by the church.  The older brother becomes almost possessed by thoughts of evil and he kills the younger brother to cleanse him of his sins.  The roles of the young brothers are performed by newcomers Joshua Hunt and Riley Fitzgerald, both dancers with maturity and ability beyond their years.  Riley as the older brother is utterly captivating and completely disturbing, in the best kind of way.

The audience sees the journey of the brothers further played out during an epic interlude of animation which leads to the reappearance of the brothers on stage as adults.  It is at this moment that we are blessed to see Damien Welch and Marc Cassidy enter the stage in the roles of the adult brothers.  Their appearance marks a distinct turn in the piece, with the pace slowing from the frantic intensity of the first half to a more languid, remorseful pas de deux between the two men.

It has been a number of years since either Welch or Cassidy have danced but their stars shine as brightly as ever before.  Every intricately choreographed moment is performed with such class, such passion, and imbued with absolute magic.  The way these men move is second to none.  They are ably joined by the exquisite Teagan Lowe for a pas de trois.  Lowe’s line and grace is extraordinary, as is her depth of characterisation.  She bends and floats across the stage as a Mother Nature type of figure who acts as an intermediary between the two brothers.

As the show continues, the older brother (Welch) comes to terms with his demons and the ghost of his younger brother that has haunted him throughout his life.  Because the story is not told in a completely linear fashion, the truth is not revealed until the very end of the show and it all comes together in an extraordinary moment that exhibits Welch’s brilliance as an artist.

Ultimately, The White Prince is a sonic, visual, dance and multimedia affair that will bend the mind of audiences.  With a stellar cast, exceptional production and the dramatic flair of Agisilaou’s staging and choreography, it is a piece that will leave audiences talking for days afterwards.  The White Prince is a production that challenges, inspires thought and forces the audience to engage with the production.  Once again, Agisilaou has created a masterpiece.