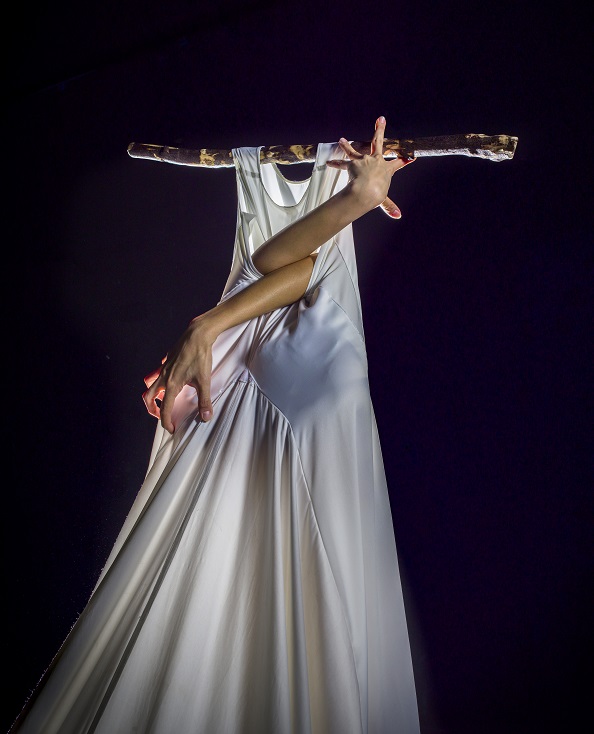 By Catherine Hunter and Nicole Griffiths.

South Australia’s own Lina Limosani’s latest work, A Delicate Situation, is a dark and raw journey through death and grief. Through the use of dance, theatre, puppetry and shadow play, the show explores humanity’s emotional struggle with death and the fear it commands.

The production draws on the ancient Malay myth and superstition of the Pontianak, a pale-skinned vampiric ghost of a woman who died during childbirth. Utilising this frightening figure, A Delicate Situation tells the story of one woman’s ultimate inner battle to come to terms with dying, death and the afterlife. The themes for this work were originally explored in 2008 by Limosani during her Asialink choreographic residency at Rimbun Dahan, Kuala Lumpar. But it wasn’t until July 2012, that A Delicate Situation received a second stage development via Adelaide Festival Centre’s inSPACE Development Program, and Limosani was able to bring together the full artistic team to create this haunting piece of dance theatre.

Dancers Suhaili Micheline Ahmad Kamil and Carol Wellman Kelly delivered an outstanding performance. Their movement was technically demanding, repetitive and amazingly complicated, however their timing was mostly flawless. To add another layer of depth to the production, Kelly utilised sound and language to compliment her already haunting gestures, at one point crying out with raw heart wrenching emotion – a stand out moment in the show.

The costume design was breathtaking and complex, with Kamil’s white sheet costume at times being pulled up on rigs and pulleys – the mechanics of which appeared to come off without a hitch. As the white costume at times enveloped Kelly, it felt representative of how death can feel all-consuming and overwhelming. 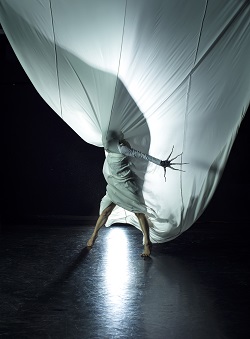 Due to the already powerful themes and emotion of the show, at times the music felt overpowering and unnecessary. The set design, however, had its own supernatural character, cleverly moving the audience through the scenes flawlessly without any clunky awkward re-designing. Another fundamental aspect that perpetuated the eerie atmosphere of the production was the lighting, which was perfect for the mood of every scene.

While in its entirety the show was a fantastic interpretation of humanity’s most primal fear, death, there were important moments in the show that felt confusing. One aspect was the transition of Kamil from servant to vampire – it happened, but the precise moment was not entirely clear to the audience. The other area of confusion centred around the faceless white heads – with the symbolism of these faceless props unclear, it was left up to the audience for interpretation.

Thankfully, it wasn’t all darkness and fear though. At times, Kelly’s performance showed the comical and light side of life, which broke the tension in the theatre. Then using shadow play, the show depicted the hope of an afterlife, with the warm lighting and soft music lifting some of the fear and anxiety felt in the room. Finally, the last scene was everything the audience could have hoped for. Kamil, the vampiric ghost cradling the vulnerable Kelly, as she finally accepted death – there was complete silence, and for a moment, every member of the audience forgot to breathe.

As the dancers exited the stage, there remained a palpable emotion within the theatre and a connection that all could relate to. A Delicate Situation is a howling reminder of the briefness of our lives and the certainty of death that we all universally face.