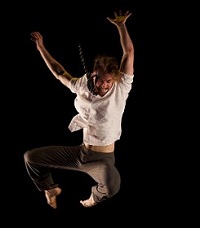 By Marc Clayton of Dance Informa.

Expressions Dance Company (EDC) brought together an amazing collection of Australia’s ﬁnest dancers in their staging of SOLO Festival of Dance, showcasing Australia’s best contemporary talent in an intimate setting.

Benjamin Chapman performed A Man of Many Talents choreographed by Elise May (EDC). Benjamin executed many childlike movements and a delightful playfulness that was contrasted by his masculine appearance and sharp suit. It was as if he was letting his inner child break free while struggling with growing up and adult life.

Jack Ziesing (EDC) performed in two very different bodies of work. Firstly, Point of Return, choreographed by Antony Hamilton, was an improvisational study showing the space between a dancer and his starting point with the use of a laser pointer. Jack’s second work, Seven Ages, choreographed by Natalie Weir, was an amazing story of seven ages of a man’s life. With the use of varying size shoes and age defying moves, this piece captured me in its beauty and simplicity.

Alice Hinde (Dancenorth) performed Raewyn Hill’s Together into the Abyss, a ﬂowing torrent of movement that brought new depth to the Festival performances. It used a single beam of light to present its struggle that nothing matters any longer.

Cloudia Elder performed Human Fly choreographed by Csaba Buday. This was one of my favourite performances of the evening. Elder portrayed an amazing character with high energy and ﬂirty, feminine seduction. She deﬁnitely brightened the stage with her very engaging performance. Surprisingly, Elder is a EDC trainee and a third-year student at QUT, yet she performed like a seasoned pro. I hope we get to see more of this new up-and-coming artist in future EDC works. Keep your eyes out for this emerging contemporary star.

Elise May (EDC) performed Close to the Bone by Narelle Benjamin. With the use of a single ﬂower  as the symbol for life, May brought her best to the performance, as always. This piece kept me entranced, following the ﬂower through the twist and turns May was making on the ﬂoor.

Independent performer/choreographer Brian Lucas premiered his political satire CON. This performance did not resinate with me well, but was performed sufficiently and was well received by many others.

Gary Stewart’s choreographic work Morphology was performed by ADT dancer Kimball Wong. It was without a doubt my favourite performance of the evening. I would say Wong is Australia’s leading contemporary dancer; his pure energy and ability to lure you in to his performance is unparalleled. He exhibited the struggle of a metamorphosis as he twitched, shook and propelled himself into the air. It is as if he was ﬂoating and then came quickly crashing down, but he kept moving, ﬂipping and performing only to an echo of his own body percussion. This performance left me wanting more, and I didn’t want it to end.

Restless Dance Artistic Director Michelle Ryan performed her own exquisite choreographic work titled Falling. This truly freeing movement was based around a chair and the connection with the cello accompanist was like no other. Ryan couldn’t walk unaided and was supported on stage by a helper, showing us all that you can still perform with grace and perfection, and that we create our own limitations.

Natalie Weir displayed a piece from her new work in development for EDC, The Red Shoes. Her piece, The Weeping Angel, was performed by Benjamin Chapman (EDC). It was an amazing performance that teased the longer forthcoming production. (So keep an eye out for this not-to-be-missed season!)

Overall, SOLO was a brilliant showcase of the exquisite contemporary talent that we have in Australia. We can only hope that this sort of collaboration will happen again in the future and give audiences a chance to further experience such an assortment of skilled contemporary artists.