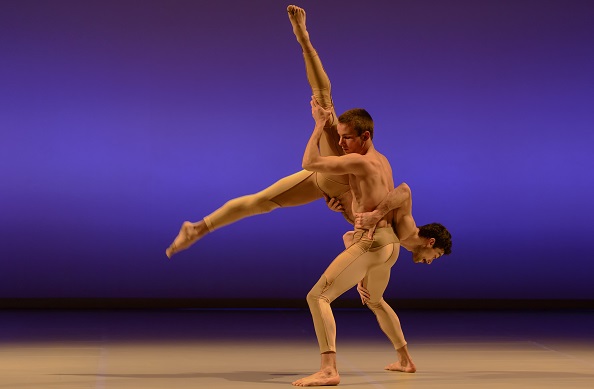 The title of the ensemble, BalletBoyz, was a name that was originally attributed to Michael Nunn and William Trevitt. They never wanted the moniker but in 1999 after a video diary was included in a documentary about the Royal Ballet, it stuck. Nunn and Trevitt are no longer boys and their company doesn’t actually do ballet, but they have had much success over the last 14 years. They have put together a company of ten male dancers (nine that have toured to Australia) that perform a contemporary based genre full of muscular athleticism that can only be showcased in an all-male company.

This performance is comprised of two pieces. Both open with a short video which offers a glimpse of rehearsal and a brief interview with each of the two choreographers. This tool allows some background for dance newbies and is interesting if a little intrusive. And that is where the similarities end.

The first piece, Serpent, by Liam Scarlett, begins with the dancers lying on the ground, gesticulating only their arms in intricate and delicate swan like gestures. The movement then becomes a series of dynamic, fluid and ever moving duets. There were many moments of effortless athleticism and incredible feats of balance. At times one dancer perfectly counterbalances with another, creating a moment of weightlessness before disengaging back to earth. Another of the highlights is the multiple duets of sumptuous dance fighting that is reminiscent of the slow motion fight scenes in the Matrix. Despite high ambitions, some of the movement becomes unintentionally repetitive, while the dancers occasionally lose their grounding. The score by well renowned composer Max Richter, although often sumptuous and beautiful at times, with a sound similar to Phillip Glass, seemed disconnected from the choreography.

Scarlett was attempting to play with the traditional female/male dynamic through his use of duets but turning the cliché on its head by working with men. Although an admirable idea, the piece struggled to create light and shade and ended up becoming a little monotonous. However, it was still visually beautiful and enjoyable to watch. The limitations of this piece were amplified by unavoidable comparison to the mature, evolved and dynamic choreography of Russell Maliphant. 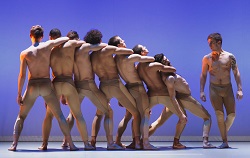 In Fallen, by Russell Maliphant, the stage is exposed and raw, with the dancers in workmen’s clothes, whilst stunningly spotlighted in Michael Hull’s lights. Hull is a constant collaborator of Maliphant’s and together they combine perfectly to create dynamic, edgy, choreography in focused, dramatic lighting states. The industrial machinations of the movement created by Malliphant was evocative of visual states in films such as Metropolis and 1984.  The men’s bodies become like the intricate cogs of a large machine, working in ritualistic precision, that transfix and enthral the audience.

Armand Amar, the award winning French composer, has created a pulsating, driving and relentless score that further propels the dancers into sinister and compelling interactions. Moving from predatory circles to bursts of explosive partnering where the dancers leap and launch each other up, across and around the stage. The creative prowess of these three creative geniuses superbly blends together to create a dark, sumptuous feast of movement brilliantly utilising The Talent of the nine male dancers.

Unlike the numbing quality of Scarlett’s Serpent, Malliphant’s Fallen is hypnotic and mesmerising, rising to a dramatic crescendo in movement and sound, ending suddenly leaving the audience wanting more.

Nunn and Trevitt have worked hard to change the expectation of what a dance company should be and have risen above expectations that BalletBoyz was a dance version of a trendy boy-band. They have created unique, compelling and relevant dance works that are able to be enjoyed by the novice and seasoned audience alike. Overall, a strong programme with a memorable and powerful conclusion provided by the inimitable Russell Maliphant.