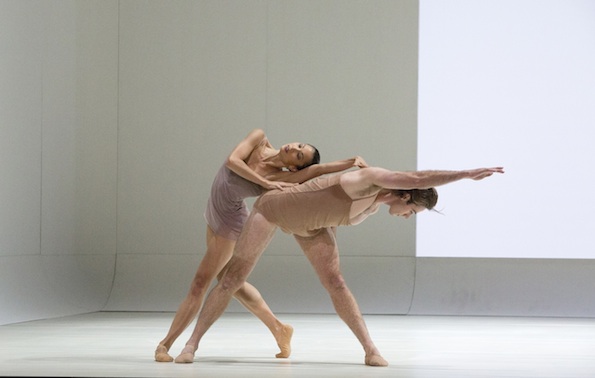 As the final curtain falls on this intriguing Australian Ballet program, one realises how well-structured yet diverse Chroma as a whole has been.

Opening with the expected, yet always unexpected, dynamic force of Wayne McGregor’s Chroma, the audience is immediately stunned and intrigued.

Against a stark white set, McGregor strikingly highlights the dancing bodies and variations of colour as they twine and intertwine, stretch and contract with athleticism and grace pushed to their physical and mechanical limits; seeking new ways to challenge both dancers and audience. This is far from the everyday vocabulary of movement.

McGregor’s stated aim in this work is to challenge the audience’s most elemental act of perception, colour and power. “I try… to help audiences look differently… Instead of looking for a narrative or a meaning, to concentrate instead on colour and only the colour or patterns of power,” he said.

Overall, Chroma is relational with only brief moments of solo performances. Thus the technical demands are increased due to the constant body interconnectivity and energy exchange within various groups as they form and reform; raising questions such as: “Who are we? How do we connect and with whom?”

Accentuating the themes of connectivity is The Australian Ballet’s physical and cultural diversity of dancers. In such an interactive work, Andrew Killian, Amber Scott and Vivienne Wong are notable standouts.

Conflicting with the starkness of the space and the minimalist aesthetics of the choreography, McGregor chose Joby Talbot’s orchestral reworking of music from The White Stripes to provide a strong sense of physical conflict and aggression.

Following such a high-intensity beginning, The Australian Ballet’s Resident Choreographer Stephen Bayne’s Art to Sky could seem rather pale and overly lyrical by comparison. Art to Sky is a tribute to both Tchaikovsky and Mozart; the perfect inspiration and outlet for Bayne’s romantic sensibility touched with unexpected tongue in cheek moments. The classicism of the choreography overlaid on a neo-classical set highlights the purity and beauty of the dancers who are bathed in a golden light, whilst Tchaikovsky’s Mozartiana completes this portrayal of a golden age. Unfortunately, this evening’s performance suffered slightly from disconcerting lapses in synchronization from some of the dancers.

The Australian Ballet’s Andrew Killian and Madeleine Eastoe in “Art to Sky.” Photo by Jess Bialek.

With it’s rather subtle sense of the ridiculous, Art to Sky proves to be the perfect link between the non-stop force of McGregor’s Chroma and Jiří Kylián’s fantastical and humorous Petite Mort and Sechs Tanze.

Kylián’s creativity and lightness of touch are pure magic. Continuing with the theme of Mozart’s music in both pieces, Kylián combines 18th century theatrical farce with modern dance geometry and formations. The additional demands of a variety of props, such as fencing foils and reams of floating fabric, create a variety of moods. But the body is always primary and used to great effect.

From the initial surprise of black crinolines gliding across the stage with the camp humour of their interchangeable male and female torsos, Kylián’s stylised choreography in Petite Mort serves to alienate and juxtapose body parts, generating an aggression and vulnerability beneath the comedy. Add the whipping sound of foils as they slash the air and the audience realises this bawdy fun verging on the burlesque contains darker undertones.

Underpinning the whole are the dancers’ classical forms and the enduring contemporary nature of Mozart. And this seems to be the overarching theme of the complete Chroma program – seeking to integrate the classical forms of ballet into the ever-changing challenges of the contemporary.