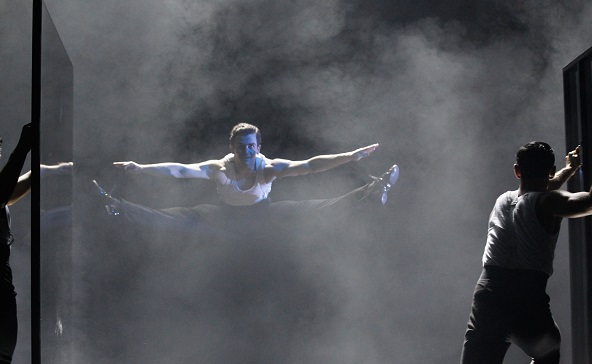 Friday 11 April saw audience members treated to a performance of the highly anticipated stage production of Baz Luhrmann’s Strictly Ballroom. And for all those who may have been sceptical as to how it may translate on stage, I’m happy to say it didn’t disappoint.

Walking into the theatre you are taken back by the amount of colour – seating is divided into various colours, which in turn allow for crowd interaction throughout the performance. Having been seated in the pink section, we were cheering for contestant 86, throughout the night.

The sets and costumes are everything you would expect from the duo that is Baz Luhrmann and Catherine Martin. The sets as well as storyline followed well and truly according to the movie, which added a nice sense of familiarity to those who had already seen the original.

With the leads being relatively unknown, they must have felt great pressure in meeting audience expectations. Thomas Lacey in the role of Scott Hastings and Phoebe Panaretos in the role of Fran both did a solid job. While Thomas may not have been the best singer or dancer on stage, it’s definitely clear that he’s a likeable musical theatre performer. You can’t help but enjoy his performance. Other great performances worth a mention are Drew Forsythe in the role of Doug Hastings and Heather Mitchell in the role of Shirley Hastings.

If you’re after a night of fun that’s perfect for the whole family, then this is your ultimate pick. It’s eye catching, highly addictive, and pure entertainment!