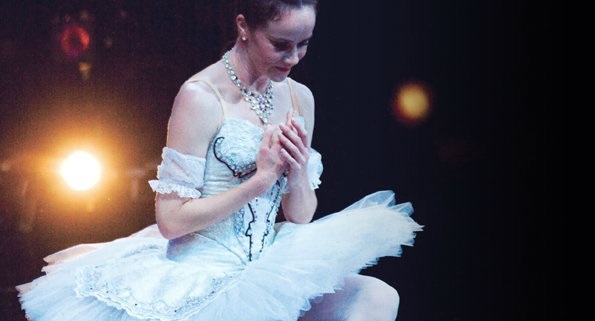 The State Theatre’s famous, luxurious red and gold curtain is pulled aside and in the audience we hold our collective breath. Out steps one of Australia’s most loved ballerinas, and immediately we stand, clapping and cheering. On stage, the dancer is obviously overcome with emotion, as she gracefully takes her reverence, hand on heart. Having recently announced her retirement, she has just danced her final opening night with the company she has performed with for over 20 years. It’s an honour and a pleasure to be able to share this moment with The Australian Ballet’s longest-serving ballerina, Lucinda Dunn OAM.

Joining at the age of 17, Lucinda has spent more than half her life with the company. Born and raised in Sydney, she won the prestigious Prix de Lausanne scholarship to study at The Royal Ballet School in London before joining The Australian Ballet in 1991. She danced her first principal role – in Etudes – in 1992 and her first principal role in a three act ballet – Aurora in Sleeping Beauty – only a year later.

A decade after entering the company, the young dancer had reached the top. “One of my proudest moments as a new Artistic Director in 2001 was announcing that Lucinda would be promoted to principal artist,” says David McAllister. “Since that time she has been a shining beacon of The Australian Ballet – a true ballerina.”

Lucinda’s incredible achievements read like an aspiring ballerina’s wish list. She has performed in all of the major classical ballets including Swan Lake, Sleeping Beauty, Don Quixote, Giselle and Romeo and Juliet. She has also had many leading roles in contemporary works by Christopher Wheeldon, Jiří Kylián, George Balanchine and Graeme Murphy, amongst other legendary names.

And then there are the awards Lucinda has received, including the Medal of the Order of Australia (OAM), an Australian Dance Award for Outstanding Performance, Green Room Award for Best Female Dancer and several prestigious nominations.

Besides all of these achievements, Lucinda has two young daughters. Her husband, Assistant Artistic Director Danilo Radojevic, has also recently announced that he will leave the company this year, and the couple are looking forward to having more time as a family.

“I’m proud that I have had a full and satisfying career and also that I have been able to return to the stage after having my two beautiful daughters,” says Lucinda. “[I’m looking forward to having] more time to myself and time with my daughters.”

Having performed in 93 ballets over her 23-year career, Lucinda chose Kenneth MacMillan’s masterwork Manon as her swansong. “I wanted to end my career on a wonderful ballet that suits my physicality,” she explains. “Once I had my debut of Manon earlier this year, it was apparent that this was the perfect vehicle to bid farewell.”

Following a successful season in Melbourne, The Australian Ballet now takes Manon to Sydney, where Lucinda will take her final curtain call on Wednesday 23 April.

Thankfully, the ballet world will not lose the talents of the star yet though, as she is set to become the Artistic Director of the Tanya Pearson Classical Coaching Academy and the Sydney City Youth Ballet in 2015. Lucinda was a student of Pearson’s world-class Academy from the age of 13, and has often returned there as a professional, to guest coach and perform.

Lucinda Dunn & Robert Curran of The Australian Ballet in ‘Onegin’ in 2012. Photo by Georges Antoni.

“It feels like a lifetime ago that I joined [The Australian Ballet] as a 17-year-old,” says Lucinda. “I didn’t have a long-term plan, especially 23-years long. So I’m humbled and grateful for where I stand now.”

“My journey through the ranks of this special career has been marked by many memorable and unforgettable experiences, performances, partners, tours and coaches – but it is a fitting time to retire.”

Audiences will certainly miss the enchanting performer, but she leaves behind her a legacy of brilliance. “Lucinda’s dancing has captivated audiences across Australia and around the world,” says McAllister. “She has inspired generations of young dancers to follow in her stellar footsteps… the treasure of her wonderful performances will live on in all of our memories long into the future.”