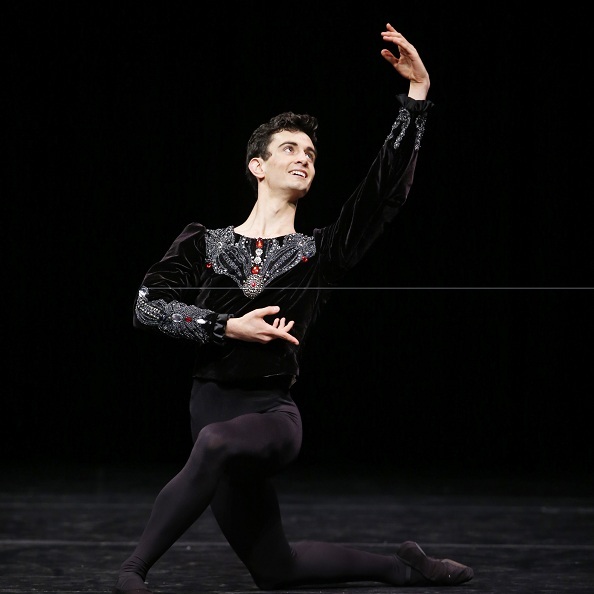 Dance Informa’s Grace Edwards spoke to Harry to congratulate him on his latest achievements and gain an inside look into his competition experience.

Congratulations on your silver medal Harry! How did you feel when you realised you had won a silver medal?

Thanks! It was a huge shock actually, especially because even before the competition I had heard from another girl who had entered the Genée the year before that the panel didn’t have to award medals unless they felt the standard of competitors was adequate. For instance, there were years where the gold medal hadn’t been awarded at all. So yes, it was a shock, but honestly it wasn’t even the best part of the whole experience.

What were your favourite aspects then?

It was really fun performing onstage for the finals. We had had rehearsals just before, so it was nice to actually do our solos onstage at the St. James as we’d already been on there.

And definitely getting to know all the people from around the world and doing class with them. I wish that we could have swapped around a bit more so we could have gotten to know even more people because we were always with the same group, but it was still good. I wish the whole thing was longer too!

For all those thinking of entering the Genée this year, what did you have to do to enter and prepare?

For the Genée there wasn’t actually an audition to go to, so the application process was fairly rigorous. You had to write down past scores from all your exams with the RAD and hand over photocopies, write down who your teachers were, your nationality – everything.

After my Solo Seal exam I had a good month or so to prepare with my teachers. The other Genée entrants from VCASS and I coached our solos every Saturday and sometimes throughout the week. Apart from my “dancer’s own” solo and the commissioned solo, we all had to learn the rest once we got to Wellington. I danced the Royal Ballet’s version of the Black Swan Pas De Deux, the Act III solo from Swan Lake, because I had already learnt it from my preparations for other competitions.

The guys’ timetable was actually very lush and had lots of breaks because we were a smaller group. On the first day we met in the foyer at 7am for breakfast, as classes began at 9am. We had ballet class each day first, for which we were split into three groups as there were 71 of us. Our schedules all involved one of three things: variation coaching, solo coaching or dancer’s own [self-choreographed solo] coaching. So this went on for about five days until Wednesday the next week.

Then we had the semi-finals, which involved a ballet class as a warm-up. We performed a ballet class onstage, and the next day we had our variation and “dancer’s own” to perform.  The three judges judged that and afterwards they announced the finalists.

Following that, on Friday, it was just the group of five of us receiving coaching through our solos because Saturday we had the actual final. We were up quite late that evening because there was an after-party after that!

You had to perform a commissioned solo by Adrian Burnett as part of the competition. What was that like?

Yes, we all had to learn Adrian’s solo. The solo was really cool. It was fairly classical and had heaps of jumps in it, so on the first day it was really exciting. But once we got to the end it was pretty suicidal because it needed so much stamina!

It actually took me ages to choreograph my “dancer’s own” solo because I hadn’t choreographed much ballet before. We got to choose our own music, so I used music from the movie Pina. It was really difficult for me, but it was a good experience.

How did you celebrate?

Pretty much by doing nothing, because I was tired by the end and also, my knee was quite sore because I have tendonitis. So, I just wanted to rest. We all had a little party in the dorms after we went back to the hotel and that was a release from it all, which was nice. There wasn’t much celebration when I went back home, it was just about having holidays. The experience itself was the reward really.

What are your plans for the future?

I’m looking forward to joining the Level Six boys at The Australian Ballet School this year and taking advantage of all the facilities there as I’d like to improve things like my upper-body strength for pas de deux. I’d also love to try and audition again for the Prix de Lausanne. If something amazing did happen and I actually got into the Prix, the prize money I’ve won from the Genée would help me pay for flights without having to worry my parents. Otherwise, it will probably end up as a long-term deposit, maybe for an audition tour at the end of my training. I’m just saving up at the moment for anything that might happen in the next few years. As for long-term plans, I’m not too sure yet. I’m just keeping my options open at the moment and seeing what happens. I’ve still got a good three years of training to go to figure that out!