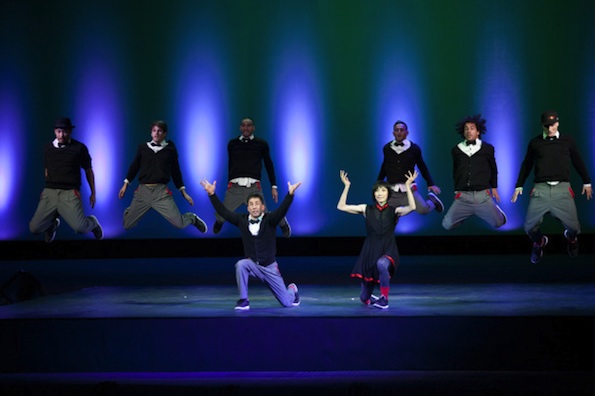 Eighteenth-century breakdance? Yes, it is possible; and as Yui Kawaguchi explains, even Japanese ballerinas love breaking to Bach.

Think of two diametrically opposed things, put them in a blender and call it art. The oft employed fusion/mash-up trick has been tried in everything from post-rock to poetry and disco to dinner time. Sometimes it’s genius; other times it’s … yeah, well – let’s not go there.

In the world of dance we’re used to this approach. Often it’s a cover for a dearth of other ideas. However, every now and then some bright cookie goes out on a limb and creates a little unexpected cross-genre magic. Enter Red Bull Flying Bach, the coming together of breakdance, ballet and Johann Sebastian Bach.

The idea of breaking to Bach’s Well Tempered Clavier is out there enough but to add a classically trained Japanese ballet dancer to a troupe of acrobatic German b-boys and have them pop and lock to piano and harpsichord is, at the very least, worthy of a curious peek.

Speaking from a wintery Berlin, a thoroughly fascinated Yui Kawaguchi recalls how she felt when the idea of her joining an all-male street dance crew was first mooted.

“When I first met Flying Steps I was quite shocked,” she says frankly. “Their attitude, how they rehearsed and thought about a piece was totally different from mine. I was really wondering how it could work; how could I stand on the stage with them?”

Kawaguchi’s background in classical ballet and her huge reputation (she choreographed the opening ceremony of the East Asian Games in 2001) had perhaps not prepared her for such an adventurous project. “I took time to see how they [Flying Steps] reacted to the music, how they co-ordinated their bodies and I actually found a lot of similarity with classical ballet. They are quite strict, on the beat and on the music, and they have names for all their steps.”

According to Kawaguchi, “The heart of this show is that with the classical world and the street dance world you can still translate. They can meet together. It doesn’t mean that they have to become the same. We can stay in our world, but if we meet we can create something unexpected.”

Flying Bach has clearly struck some kind of chord. In Switzerland tickets were selling for up to a thousand euros on eBay. “You can really see the different kind of audiences in the theatre,” Kawaguchi enthuses. “The breakdance kids will come with their grandfathers to listen to Bach, so they can share their ideas and their fascination. This is the kind of celebration in performance that I have been missing for a long time.”

Speaking with Yui Kawaguchi it’s clear she’s been inspired anew by Flying Bach and by her involvement with Flying Steps. Working with dancers like Benni Kimoto (the first person ever to do multiple, consecutive air twists), has both challenged and invigorated her. She also loves working with boys.

“I feel really comfortable – really safe,” she says. “It’s good because there are no complicated mental games, so it’s really easy with them. But once on stage they give off two hundred percent, so I have to be really strong. I have to be really careful with my conditioning because it’s like you are alone as a woman on a football team.”

Aside from the stylistic and gender gaps, Flying Bach has also proved itself to be a significant technical challenge. Dancing since the age of six, Kawaguchi needed to call on all her training and pay close attention to detail.

“Bach’s music is really ascetic so it’s not easy to just move with your emotions. I have to be really clear with my steps,” she explains. “It’s quite the opposite to a lot of modern dance pieces, which start with a theme or a story and then the music fits around it. This time we started with a composition that we could not change.”

To work in the more acrobatic milieu of breakdance, Kawaguchi needed to learn a few new tricks. “For example, I can stand on my hands now,” she proudly points out. However, the cross-fertilisation only goes so far. “It was also important that I didn’t become a breakdancer and they didn’t become ballet dancers. It is part of the art of this work that we can stay in our own worlds but also communicate. This is quite poetic, I think.”

Although Flying Bach sounds like a show with bells and whistles, it’s actually quite minimal. As Yui Kawaguchi explains, “For me, dance is music and music is dance, and for this project that is all that happens. We have no big scenery or spectacular costumes. It’s just human. The pianist plays and we dance. Very simple.”

With its daring and imaginative take on the smash-together fashion in dance, Flying Bach has already crossed the high/low culture barrier and generation gap. Its Australian tour will almost certainly bring skate punks to chamber music and grannies to hip-hop.

Who said dance wasn’t for the whole family?