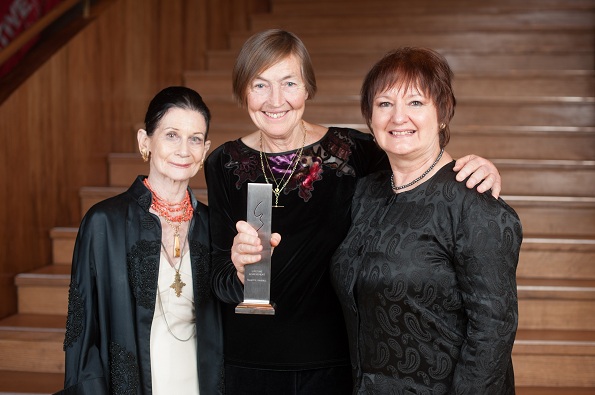 Nanette Hassall is truly deserving of her most recent accolade, The Australian Dance Awards’ Lifetime Achievement Award. Presented at the awards ceremony in September in her new hometown of Perth, Nanette’s legacy in dance is remarkable.

With a career that has so far spanned decades and seen Nanette as a performer, director, teacher, and choreographer both locally and overseas, she is well-known for being involved with Rambert Ballet, Strider Dance Company and Merce Cunningham Dance Company. Nanette graduated from the Julliard School, founded and directed Danceworks in Melbourne until 1990, received an Australian Dance Award for Services to Dance Education in 2002 and a Lifetime Achievement Award from Ausdance WA in 2007.

Nanette is now the Head of the Dance Department at the Western Australian Academy of Performing Arts (WAAPA.) She spoke with Dance Informa from China where she was assisting WAAPA students.

Congratulations on receiving the Australian Dance Awards Lifetime Achievement Award!  Not only is it a great honour but I imagine that receiving the award at the ceremony held in Perth would have made it even more special…

Yes, there was an added pleasure in receiving the award in Perth, having spent the last 15 years of my life there. Family members who live interstate came to attend the ceremony and the new Heath Ledger Theatre in Perth proved to be a great venue for the occasion.

What have been some of your personal career highlights?

There have been many, but I think the opportunity to work in an international environment has been one of them – the opportunity to build friendships with such a wide group of people and to enjoy seeing the dance work of other artists. Dance in Asia has been wonderfully enlightening for me. In Indonesia, Korea, Cambodia and Taiwan dance and movement are deeply embedded in the spiritual psyche and culture. This has in some way given me a deeper insight into what it means to dance for all of us and its power to transform and draw us closer together.

You have done almost everything a dancer could do – perform, teach, choreograph, direct.  Which of these many roles gives you the most satisfaction?

It’s difficult to say what I’ve preferred. They all require quite contrasting skills, but I guess if I had to choose it would be choreographing. On the other hand it is an incredible privilege to work with young people.

Have you ever considered leaving the dance world and pursuing a career in another field?

Yes. I have felt the desire to change career paths several times. Once to go back to uni to study linguistics, English literature and philosophy, then another stint to complete a degree in photography. But I find it curious that all these attempts only lead me back to dance, incredibly enriched by the experiences I have enjoyed. Now I just put all those ideas into a box labelled “another retirement plan.” It appears from the long list of items I am going to be very busy when I get around to it.

How do you view the dance scene in Western Australia at the moment?

With enthusiasm and at the same time nervousness. There has been a burgeoning of dance and a number of both young and more mature artists are developing their work in interesting ways. A new director is taking over the WA Ballet Company and a new contemporary company has formed.

What else do you hope to achieve during your career?

I do hope to continue developing more of those international partnerships we have formed and I am excited by the opportunities for the students at WAAPA to see dance in a broader context.