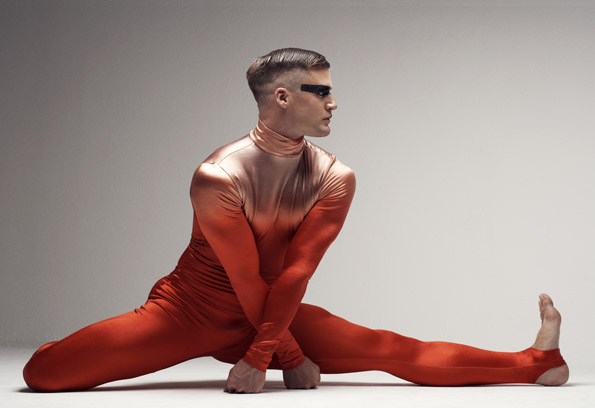 The ubiquitous picture of two dancers clad in red tights and striped jackets (hello, Twyla Tharp’s In The Upper Room) that advertised come, been and gone in every newspaper, magazine and web page had me very excited.  A piece that married classical dance with rock ‘n roll, namely David Bowie and Lou Reed, simply had to be amazing.  Not that the concept was entirely new.  New York’s Joffrey Ballet Company has previously strutted their stuff to the sounds of Prince, and Bejart Ballet Lausanne has combined Queen with Mozart.  I have to admit, that while normally weary of hype, I approached the opening night performance with great excitement and preceded the show with a week of listening to Bowie and Reed in anticipation.

The first section, noticeably devoid of either Bowie or Reed, saw the dancers on stage in electric blue unitards and with dramatic panda eyes that looked less glam punk and more bar brawl aftermath.  The bare stage instilled the piece with an amateur air that suggested the show would not be all I had hoped.  Slow, repetitive movements were the mainstay of the piece, saved only by the strength and impressive bodies of the dancers who managed to imbue the stale choreography with some life.

By the end of gone, my spirits were lifted slightly as the momentum increased and the dancers finally got a chance to spread their wings through a series of dynamic jumps and turns.  As the lights went up for interval, I remained in my seat, muted with disappointment yet hopeful that the remaining two acts would prove to be all that I had been led to believe. 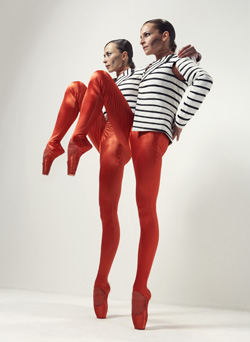 Part two – been – started with Lou Reed’s Venus in Furs and one of the female dancers clad in an opulent fur coat.  The dancer was soon joined onstage by the rest of the company in various different costumes that gave a nod to the glam rock era of both Reed and Bowie’s careers.  The cyclorama was removed to reveal the back of the stage which is normally populated by scenery, props and dancers away from the eyes of the audience.  The effect was impressive, giving the piece some much needed depth, both literally and metaphorically.  Next up was Reed’s Heroin, a devastating track that holds so much potential for a choreographer and dancer to explore.  On this occasion, we got a dancer in a unitard which was embellished with oversized syringes.  With the stage stripped bare and the compelling subject matter of heroin use being sung about, this part could have been poignant and impressive, but at best it was comical.  Unintentionally so.

Come again, which was the title of the final act, oddly saw a ballet barre at the back of the stage which the dancers used as if it was the uneven bars in a gymnasium.  I’m still not sure why.  The costumes returned to the glam rock style but were mismatched and created a cacophony of confusion for the audience.  There needed to be more cohesiveness from the themes to allow for some semblance of motif or motive.  Alas, we were left with what appeared to be a bunch of different ideas thrown randomly together.

The final song of the evening was fittingly Bowie’s Jean Genie, which created a noticeable shift in audience mood.  The dancers appeared in the Twyla Tharp-esque red, white and black costumes and strutted with vibrancy to the song.  It was a shame there wasn’t more of this throughout the show as on this occasion, Clark nailed the nuances of Bowie’s track, and had the dancers testing their limits.  While the company received more thunderous applause from the audience at the conclusion of the show, I couldn’t help notice the hasty exit made by many people seated near myself in the stalls.  Kind of summed up how I felt, really.