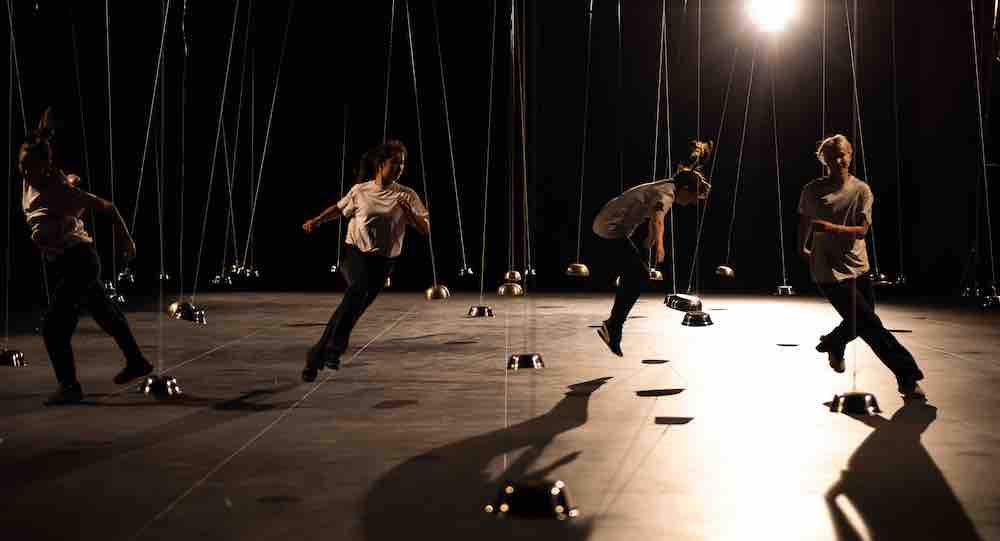 Or so says Amber Haines, who, together with her partner in life and dance, Kyle Page, is flying south from tropical Townsville to wintery Melbourne to take part in the city’s inaugural RISING Festival. First imagined as a re-evolution of the Melbourne International Arts Festival, the new event has encouraged its 750+ artists to go beyond. As such, Haines and Page will stage Dancenorth’s new work, RED, in a giant inflatable dome.

“There is absolutely no doubt that this work is extending us into a new dimension,” Page adds. “It’s an extension of the explorations that we’ve been curious to dive into.”

Like most things, RISING was impacted by viral mass cancellation in 2020, but, perhaps invigorated by disruption to think again, the festival (co-directed by Chunky Move founder Gideon Obarzanek) has opted for both ambition and adventure. Its desire to be “the Asia Pacific’s pre-eminent cultural festival” sits alongside its expansive brief — a mission to jump barriers, to diversify expectation, and create site-specific experiences for both audiences and artists.

Responding to the call, one of Australia’s most celebrated dancemakers, Lucy Guerin AO, teamed up with renowned percussionist Matthias Schack-Arnott and the National Gallery of Victoria to create Pendulum. The work is more installation than theatre, and the stars of the show are the 39 carefully designed and precisely weighted pendulums that the dancers move amongst.

“Think big and make your most ambitious work,” is how Guerin describes RISING’s call to action. “Extend your thinking beyond what you might normally do. So we said, a hundred pendulums; but then as it developed, it worked out that 39 was a good number.”

Speaking with Dance Informa just days before opening, Guerin reflects on the process of making Pendulum. “It’s been a great experience for me to kind of break out of the theatre a little bit. I’m quite interested in trying it a bit more now.”

Meanwhile, at Obarzanek’s alma mater, Chunky Move, Antony Hamilton is busy planning a rave in a church. His new work, Yung Lung, muses energetically on data-driven modernity. However, rather than take the commonly held declinist view, Hamilton’s attitude is one of openness to the inevitability of change.

Mapping this onto the context of a new cultural festival, he observes, “What I find most interesting is that it’s really quite a radical shift in terms of the ‘loss’ of the Melbourne International Arts Festival. It’s like this threshold moment. The staple of old style festivals is kind of shifting toward, you know, something else. I mean, we don’t even know what it is yet, but we know it’s changed.”

Of the way that the COVID interruption has played into this, Hamilton suggests, “There’s a sense that the time is now. We have to take this moment to jump forward.”

That Yung Lung will take place in one of Melbourne’s long established and much loved venues (former fight ring, concert venue and now charismatic church Festival Hall) is perhaps symbolic of the RISING moment.

As Hamilton explains, “It was a happy accident that Festival Hall is now the Hillsong church’s place, which reminds you that ritual is really everywhere. It surrounds us. So, I think about the rituals that continue to occupy humanity. You know, they’re ever shifting, but they’re always there.”

Thus, while festivals and performances are clearly ceremonial, Yung Lung channels another of our beloved rituals, the party. “There’s this paradox,” Hamilton elaborates. “There’s a party aspect to it, but we’re also partying distracted. The party is that. Our perpetual distraction.”

Back in the inflatable dome, Dancenorth’s RED is illuminating another of humanity’s continuums — namely, our co-entailed relationship with everything else on this planet. “We’re really curious about viewing humans as part of this deeply interconnected biological landscape of sentient beings on a giant rock floating through space,” says Page.

The grander idea is to burst the usual bubble of performative reality and ritualistic satisfaction. “At a certain point in the work, the air in the dome is switched off, and we literally witness the set implode,” Haines reveals. “The dancers therefore represent living organisms, more than people or characters.”

Here again, we see the RISING brief in action: perimeters being breached, identity reconfigured. As Guerin notes, the “black void” of a gallery space, with its 39 lighted pendulums, is a step outside normal practise. “I did start off with more choreographic movement,” she recalls, “but as we developed the work, it just felt like the swing, and that motion which is informed by gravity, was what I wanted to focus on. It’s kind of like being in this matrix of larger forces.”

Into a fin du monde zeitgeist of pandemic, paranoia and the endlessly re-posted memes of powerlessness, Hamilton dares to suggest an alternative and counter-intuitively upbeat approach to the onslaught of modernity. “When I think about the rationale for Yung Lung, what drove it as an idea was a reaction to minimalism, reduction and ‘wellbeing’. It feels like it’s a reaction to that fear of doing something wrong, or the culture of trying to find a quiet space. It’s going, ‘No, let’s dive headlong into the noise.’ Let’s not be afraid of it anymore.”

Or perhaps, to paraphrase Haines, let’s be expansive with it.

For more information on the RISING Festival, visit rising.melbourne.