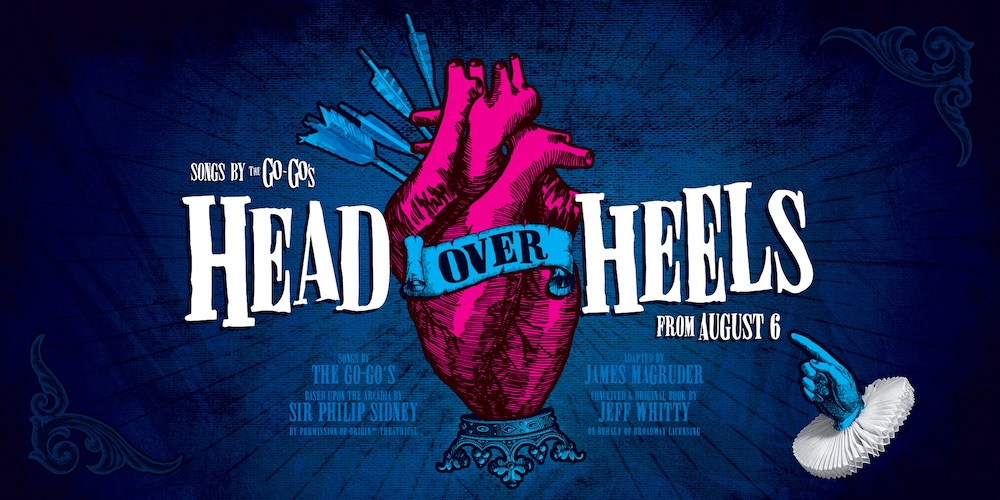 The team that produced the 2019 smash hit musical American Psycho, in association with Hayes Theatre Co, are thrilled to present the Australian premiere of the Broadway hit musical Head Over Heels. Playing at Hayes Theatre Co from 6 August, Head Over Heels is a bold new musical comedy from the visionaries behind Hedwig and the Angry Inch, Avenue Q, Next To Normal and Spring Awakening.

Set to the music of the iconic 1980s all-female rock band The Go-Go’s, this hilarious and ground-breaking piece features songs “We Got the Beat,” “Our Lips Are Sealed” and Belinda Carlisle’s “Heaven is a Place on Earth.”

In a brazen (yet completely on-brand) attempt to flout the dire warnings of the Oracle, King Basilius of Arcadia sets off on a journey of evasion and avoidance with his entire family in tow. The next few raucous and ruff-filled hours see all that is familiar to this royal clan tipped on its crown as they are flung, loins first, into a new age of inclusion and transformation.

Director Ellen Simpson says, “Before I began reading the piece, I stumbled on an interview with a handful of the Broadway cast. I’ve not seen an interview where the cast were so effervescent in their joy and love for their show. They were so assured in its message of inclusion, and the importance with which they spoke about how the show called for diversity and broad representation was galvanizing and inspiring. It had my heart already.”

Simpson adds, “Without it sounding like a variety extravaganza, I really expect Head Over Heels to have something for everyone. If it’s punny you’re after – welcome. Are you a Scream Queen and only looking for sky-rocketing belters and soaring rock melodies? Please, do come in. You’re a Trad Fad? Don’t be coy… there are nods, nudges and hat tips to every classic that ever curtseyed. Having been involved with several wonderful projects with Hayes Theatre Co already as choreographer and movement director, I am very excited and full of anticipation for my upcoming role as director of Head Over Heels. I’m looking forward to injecting a large, ruff-wrapped dose of joy into Sydney theatre.”

Joining Simpson as part of this Australian creative team are choreographer Cameron Mitchell (Catch Me If You Can, The View UpStairs), music director Zara Stanton (Fangirls, HMS Pinafore) and designer Isabel Hudson (American Psycho, The View UpStairs). The cast will be announced in coming months.