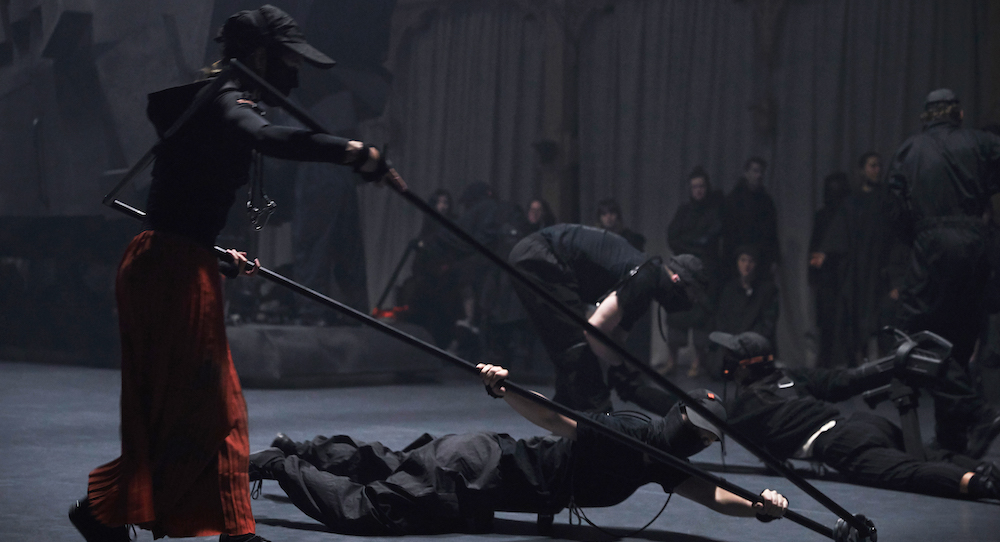 Attending ​Token Armies​ is like being invited by a radical friend who is clued-in to the artistic underground, to a happening that is equal parts street demonstration, art-installation and underground rave. You are uncertain as to whether you are going to be fighting on the street, having an elevating artistic experience, having fun with a funky flash mob or all of the above.

In his artistic notes, Hamilton states that he wanted to create “a work that brings together varied life forms in a collective action. Informed by and in negotiation with a constructed world built around them, the work seeks a common language between life forms and a sense of unified focussed cooperation.” The interacting life forms are certainly there but its uncertain as to what they are working toward.

It all unfolds in the cavernous space of Melbourne’s Meat Market, where the performance is already in motion, making the audience feel as if they have arrived late to some kind of intimidating line-up. The audience are herded along both sides of this massive rectangular space, which seems to go forever amidst the shadows and smoke. There is little sound on entering, and trying to gain your bearings and adjust your vision is disconcerting to say the least, particularly when you are invited to don a long Gestapo looking coat, cap and mouth mask.

There is no music initially, just the sound of two live draft horses being manoeuvred, and made to repeat certain actions, the sound of a whip and people moving with the added confusion of not being able to distinguish the performers from the audience. ​Token Armies​ is a performance of massive proportions, playing with your mind as well as your sense of depth and perception. Initially, you feel like you’re being herded to work for a higher order, as much as the performers who move with numb subservience are moving as if weighed down by invisible demands.

Throughout the performance, there are constant questions going through your head: “Will I be taken somewhere? Who controls the actions in this world, and is this world a reflection of our present or future existence?”

Especially uncanny was the role of the Creature Technologies’ animated cyborg horses which came to ‘life’ after the data transfer of the live horse’s movements to the Robotic horses. You realise these giant cyborg creatures are using the same gestures, even the same obstinance and misbehaviour as their live counterparts, who have now disappeared from view.

It’s a challenging performance, disconcerting and stressful, as you’re not sure what is happening or where to look. It all seems mixed up, but the dancers who still seem war weary, start to strip off their clothes until they are all naked, carrying each other, aiding those who fall, up and down the immense space, doing I’m not sure what.

And then at some point, there is the intoxicating and very heady scent of spring flowers, and there is a distinct change of tone. The dancers start to leap and twirl, throwing flowers, constantly moving in an improvised fashion, somehow relieved of the burdens they had been carrying and liberated from the ‘power’. Finally, they are exhausted, after all they have been leaping and dancing the length of a football field.

Token Armies seems to explore themes around a shared humanity, along with a vision of hope. And it does this on a grand and ambitious scale. Such a crazy, other worldly reality, also exploring the attraction and infiltration of technology. The blend of animal, human and robotic was disconcerting and points to a number of themes that Hamilton suggests lie in the near future. At the end of this intense and demanding work, I must admit that I was glad to shed my Gestapo coat and escape to the clear, cool Melbourne evening.