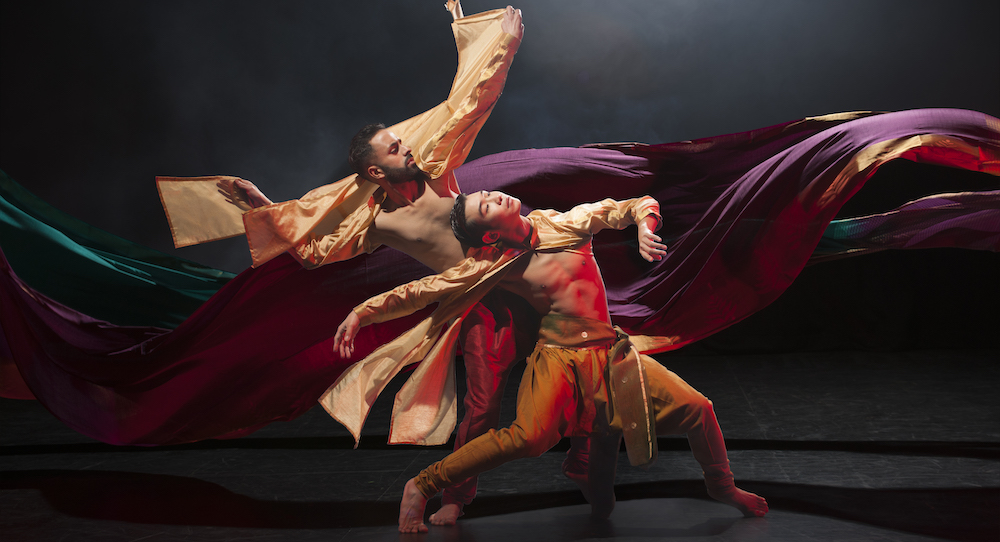 We are in a rehearsal break, sitting on the floor in a studio at Lucy Guerin’s HQ in North Melbourne. Speaking through an interpreter (herself a dancer), Shenyuan is attempting to distil the complex conceptual framework of the new two hander he’s been working on with British/Indian dancemaker Aakash Odedra. It’s a big ask, not simply because of the language difference but because the work revolves around the ancient and notoriously esoteric notion of saṃsāra.

Popularly understood to denote the classical Indian theory of reincarnation (or transmigration), the Sanskrit word ‘saṃsāra’ has subtler, more powerful connotations rooted in ideas of cyclicality, infinity and co-entailment. Indeed, as Shenyuan points out, one Mandarin translation means “something like the roadless road.” It’s all very metaphysical, even counter-intuitive; and it therefore poses fascinating challenges for those wishing to make contemporary dance works on the theme.

However, for both Shenyuan and Odedra, the Sramanic philosophical and spiritual tradition is familiar. Although they grew up in different countries, they shared similar journeys as young men, combining their individual love of dance with what Odedra calls “a deeply rooted religious practise.” Thus, when they first got together to make the work, the parallels were powerful.

“When I first met Hu, there was an instant connection which then removed China and India and culture,” Odedra recalls. “I think it’s this sort of connection that has become our trading point, or our exchange point. Even though we dance very differently, we also dance quite similarly. Sometimes, when we watch the rehearsal videos, we get confused as to who is who, especially if we’re wearing the same clothes. The only giveaway is my beard.”

For those of us on the outside, the result of this multi-lingual, cross cultural, interpersonal dance process will be a world premiere season of Saṃsāra next March at AsiaTOPA (followed by seasons in China and the UK). Inspired by the famous 16th century Chinese novel Journey to the West, which tells the tale of the monk Xuanzang’s pilgrimage from China to India, Saṃsāra will draw together diverse dance grammar, from Kathak to contemporary, and in its very construction hint at something beyond the easy, commonplace reductions of ethnicity, culture and genre.

“Saṃsāra actually is a journey for us, one which may not have an end,” Odedra explains. “So, how do we show this in our dance? I think that the more we look into our own saṃsāra,there’s multiple layers that emerge; and of course, our job is to externalise that and share that with people who are from different cycles and different places. I think the key is, how do you sift through this whole mountain, so to speak, to find this small gold nugget. That’s our task at the moment. How do we make it simple enough that a ten year old child can understand the piece?”

Indeed, Shenyuan and Odedra’s journey from concept to performance is, in some small way, analogous to the odyssey, both physical and spiritual, depicted in Journey to the West. The fact that we are all together in a room in Australia, having come from afar, itself reveals something of the process. As Shenyuan elaborates, “There’s a monk and a monkey in the original story; and I actually interpret it as there being two parts of the same consciousness. The monkey could be something that the monk is imagining, like a kind of supernatural part of himself. In a way, the monk is a physical body in the real world, and the monkey is this metaphysical element that’s guiding this journey along. It’s like the part of us that is always ahead of us, paving the way, while our physical body is here suffering, experiencing.”

Watching them rehearse, it is clear that Shenyuan and Odedra share personal, spiritual and choreographic terrain. The fight sequence they work on draws its movement palette from kung fu, Asian gestural formality and modern Western fluidity. Despite needing to work through an intepreter, they are clearly finding ways to communicate nuance and detail. “So, because we don’t speak each other’s languages, we share photos and refer to stories, and that then translates to movement,” Shenyuan notes. “It’s not literally sharing our lives but abstracting these themes of mutual experience into a piece.”

Although saṃsāra the concept may seem veiled in mystery, both Shenyuan and Odedra are aware that Saṃsāra the work will take place in a specific cultural/historic context. Its 2020 premiere at Melbourne’s AsiaTOPA festival comes not only as Australia/China relations strain over trade and geo-strategic differences, and India wrestles with the competing agendas of nationalist, sectarian and modernising forces, but in a zeitgeist riven by rival dispositions of nativist retreat and globalist plurality. Indeed, AsiaTOPA itself is inevitably a part of this equation, with its remit of bringing pan-Asian performers to this country and diluting the age old silos of East and West.

Reflecting on this, Odedra expands, “The walls seem to be getting higher, literally and metaphorically, even though the world is more inter-connected than ever. It’s strange.”

For him, the easy recourse to digital outrage is not a sufficient response. “Call me a bit old school, but I’m someone who believes in the power of one’s own action, physically in the environment. By making this piece, it’s like we’re giving people a chance to escape, or allow themselves to be free for a while. Even if you can make a person present for five minutes, I think there is something important about that.”

Meanwhile, Shenyuan tries to view the work through the prism of Australia’s large, and now quite youthful, Chinese diaspora. “What we’re bringing is the different sides to a culture that you think you’re familiar with. For the audiences here in Melbourne, and the young Chinese especially, who maybe think that all Chinese tradition is one way, we’re saying that actually we’re all evolving. Hopefully, through this work, the audience can see that China’s evolving, India’s evolving, everyone is sort of moving in a new direction, and that this collaboration is a statement of that.”

As we break for lunch, and the dancers contemplate getting back into rehearsal, Odedra offers a thought in conclusion. “There are many, many points where we intersect, and we take from these confluences and we try to make our own little river, which then finds its way to the ocean.”

And this, perhaps, is the ocean in which we shall all one day dance again.

Stay tuned for more on Hu Shenyuan and Aakash Odedra’s Saṃsāra at the AsiaTOPA festival in March 2020. Visit asiatopa.com.au.