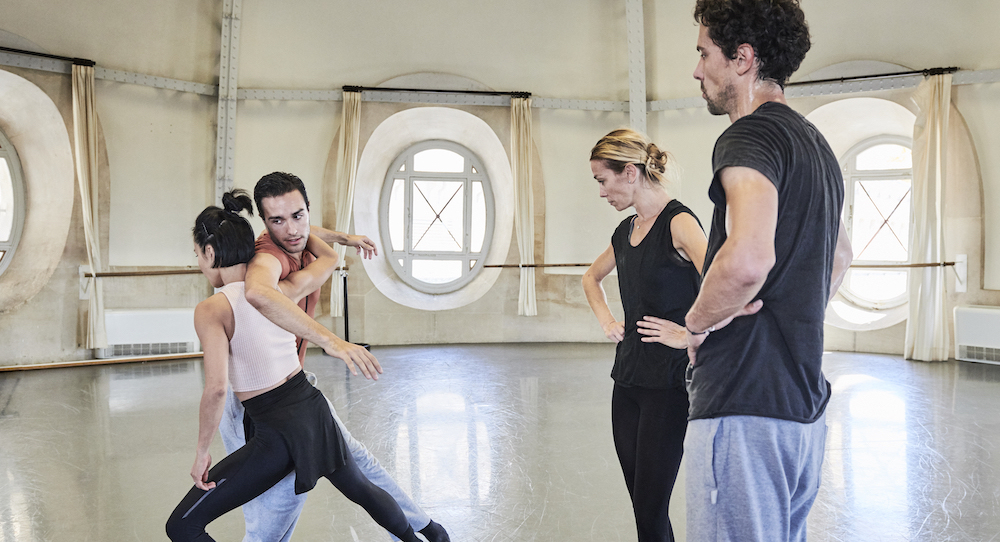 The Opening Gala evening of the Paris Opera Ballet season is a special moment in the calendar of the mystical Opéra National de Paris in the gilded Palais Garnier. It is a red carpet affair with tickets snapped up as soon as they go on sale. The tickets specify long dresses for the women and tuxedos for the men; it’s the Gala, with no expense spared. The Gala launches the new season and brings together all the artists of the Paris Opera House: the Ballet and Ballet School, with choreography this year by Benjamin Millepied and the Orchestra, conducted by Philippe Jordan.

From the creation of the floral artistry creating a magical garden up and around the golden stairways to the flowing champagne, this is the moment to be seen and to watch. The paparazzi flutter amongst the stars of stage and screen, and those lucky enough to have nabbed some tickets might be photographed on the red carpet.

The evening programme following the Grand Defilé, which is the presentation of all the students and dancers of the Paris Opera Ballet, generally includes a mix of choreographers from around the world.

Earlier this year, there was a very excited buzz down at Sydney Dance Company (SDC) when the news came through that it was official – the duet from Rafael Bonachela’s ab[intra] had been included in the Paris Opera Ballet’s 2019 Gala evening. The Paris Opera Ballet’s Artistic Director, Aurélie Dupont, had seen the duet, loved it and wanted it in the line up.

Some time after the fact, Dance Informa had the opportunity to talk to SDC’s Charmene Yap and Davide Di Giovanni, who were sent on a mission to Paris to teach ab[intra] to the two Paris Opera étoiles who would perform the duet at the Gala.

How did the opportunity to teach the duet, ab[intra], come about?

“Rafael had been talking with Aurélie, the Paris Opera Ballet director, and she was interested in the duet from ab[intra], and when she saw the duet, which is 10 minutes long, she loved it,” Yap explains. “So we went to Paris. Actually, we went there twice, but the first time we really only had two hours a day for four days to teach the two dancers who would be performing the piece. So it wasn’t great timing, as the dancers were close to the end of their year and getting ready to go on vacation. When we arrived, it was the end of their performance year, which meant they learnt the duet, then went on vacation.”

Yap continues, “And then, the dancers requested that we go back; they needed us to go back and coach them. So the second time over there, we had more time – a total of two-and-a-half weeks.”

There had been a month in between.

Di Giovanni explains further, “They did a good job without us, I must say, because it’s hard.They had been using the videos we had made initially, but it’s not the same. And they didn’t really have anyone to coach them. The second time over there, we had an assistant ballet coach from the Paris Opera Ballet who was there with all of us, so he was able to help them after we had left.”

Between the first and second time over there, the Paris Opera Ballet dancers had had their summer break, which meant when Di Giovanni and Yap returned, the dancers came back fresher, and they could really focus on the duet. It was also good timing, as it was the lead up to the Gala.

Who were the dancers chosen to do the ab[intra] duet?

What was the most challenging part of this mission?

Yap says challenges included “the time frame, which was very tight, and we were working with ballet dancers, teaching a physicality, that we are used to, but which is not something that ballet dancers are necessarily used to.”

What about the capacity of the dancers to grasp a very contemporary physicality?

Di Giovanni explains, “The dancers had a very good understanding of duets and the technicality of working with another body; and they are very good in understanding the technicality of the movement, but it’s It’s a very particular way of moving. It’s not easy. The way Charmene moves is not the way everybody can move, so Elanora was dealing with this new way, and technically, she would achieve it in a good way, but it’s more about the finesse of the movement and the quality of the dance.”

Yap continues, “It is what it is. Like any duet, there’s the essence and then it becomes something else for a different set of dancers, and you have to allow for that, and that’s part of the beauty of being able to pass on the duet. The other thing that is really difficult is the fact that it’s a 10-minute duet, which is very taxing on the body. When Davide and I first tried to get through it when we arrived, from beginning to end, we just couldn’t do it. You do eventually increase your stamina and learn when and how to pace yourself in terms of energy. But teaching all of that in such a short period of time, and teaching it to dancers nearly a decade older than us was a challenge. The bodies are different, so you have to find a compromise that works for everybody, keeping the essence of the duet while allowing it to blossom into something that is truly them.”

Di Giovanni adds, “The duet can’t be the same, but they were both very good with listening and trying to understand how the duet worked. Stephane was very receptive, and I apologised for constantly correcting him, but he was fine, saying, ‘Don’t worry, just tell me, I don’t mind.’”

For Di Giovanni, there were childhood memories that made coaching Bouillon feel slightly awkward. “I remember Stephane from when I was very young and he was an étoile,” he shares. “I remember that both Elanora and Stephane were just starting their career, and I was just a child, and now I’m teaching him. It was really weird. But they were both very open, and by the end we had a very nice connection with them.”

Where were rehearsals held?

“We rehearsed in the Petipa studio, and we would do class with the company each morning, which, for Charmene was a bit intimidating,” Di Giovanni admits. “It was really lovely, but quite intimidating not having done a ballet class in quite a while and of course it was the Paris Opera Ballet! Aurélie would also do the morning classes when she could.”

What was the most exciting part of the mission?

“The exciting part of the process was being able to pass the duet onto other dancers, because Davide and I had really invested in it, body and soul,” Yap says.

Di Giovanni adds, “It was a process that we had been growing into over two years, always adding more of ourselves. So when we were showing Stephane and Elanora, we were excited about giving them as much as we possibly could. We had learnt so much, and we wanted to give them the best of it. It was a real gift for us to be able to share it and to transfer something that we had created in our bodies and in our minds, transferring something that was deeply emotional and very good.”

How do you transfer that emotion to dancers learning the duet?

Yap elaborates on the process. “First, you teach the steps, then they become coordinated with the steps and get used to them; then comes the artistry and the emotion behind it, and that’s what we mean about the transferral. It’s very much about the two people and their partnership.”

She continues, “In this duet, we are entangled, physically entangled for most of the 10 minutes, and it’s not only a physical connection; it’s also a very emotional connection where you have to grow with the other person. And that comes with exploring the emotion. It’s partly about us explaining how we feel, then it’s a little bit of the music, because you can feel it in the music, and then letting them find their own emotional journey through the piece. So I did explain parts where he’s left you and then you rediscover each other again. You really have to articulate that moment, because it’s the first time you’re touching each other again after a long time. It’s getting into those finer details that have an emotional direction.”

Were there any disappointments in this process?

“We had to head back to Sydney for our other commitments, which meant we couldn’t go to the Gala, and didn’t actually see the performance,” Di Giovanni notes.

But for both Di Giovanni and Yap, they both confirmed that it was a fabulous learning experience, not to mention the opportunity to meet and do classes alongside other international dancers in the Paris Opera House.

As an aside, New Zealand-born Hannah O’Neil, a graduate of The Australian Ballet School and now an étoile with the Paris Opera Ballet, was understudy for the female role.