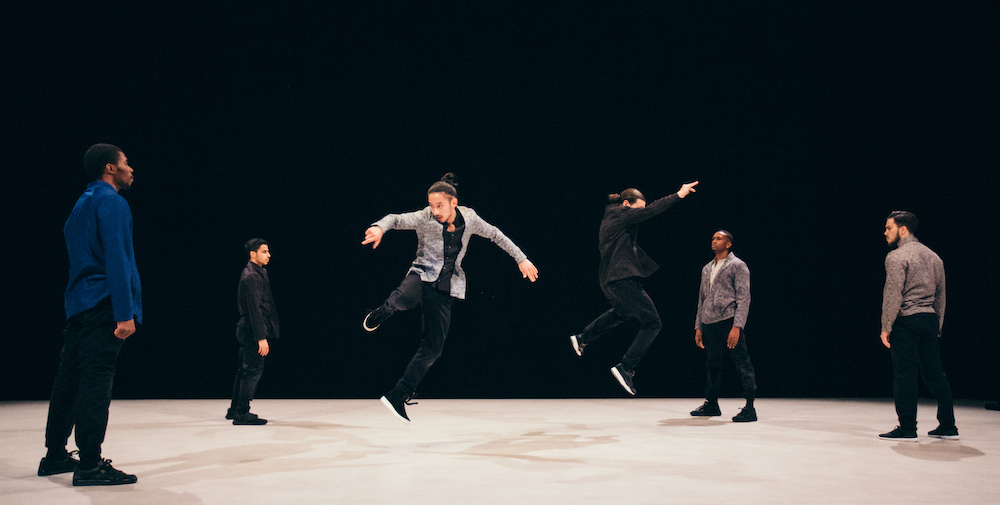 Kata’s Australian premiere gives Australian audiences a chance to engage with the work of leading French dance creator Anne Nguyen. Nguyen’s background is based on a wide variety of hip hop styles along with the martial arts, especially Brazilian Capoeira. She has been at the forefront of integrating hip hop street aesthetics with contemporary dance experimentation with her Paris-based ​Compagnie​ ​par Terre​ (​Company on the ground). ​Nguyen brings a genre busting ethos with a highly cerebral approach to the creative process. Dance Informa had the opportunity to discuss the underlying ideas that formed Kata.

We notice that your biography combines a dedication to both martial arts and dance. Are they equally important to you, or does one inform and shape your artistic sensibility more than the other?

“Before I began breakdancing in 1999, I danced very little. I felt that dancing was too much about seduction or showing off. I assiduously practised gymnastics and martial arts. The idea of being able to execute difficult movements appealed to me more.

But the freedom of creation and the idea of playing with conventions also drew me toward hip hop dance and culture. One day, my capoeira teacher asked me to choose between capoeira and breakdance. I was naturally drawn to dance by the need to break rules and explore human movement beyond its efficiency and usefulness.

It was the warlike essence of breakdance that drew me, and I saw breakdance as a contemporary form of martial arts, a means of coping with a hostile urban environment that transforms the body through violence. Even when there are no enemies to face, no physical feats to accomplish, the fighting spirit that drives the world of the living finds its expression through breakdance.”

What was the original spark of inspiration for Kata?

“Kata is my 10th dance production, and I’ve always seen my choreography as similar to the ‘katas’ of martial arts. The dancers undertake sequences of movements and dance principles that enable the dancers performing them to feel enriched and stimulates them to exceed themselves physically and mentally. They must achieve this by ‘being’, and not by thinking.

With Kata, I started with a dance made of seemingly useless movements and tried to discover the usefulness in every gesture. I present the eight breakdancers in the show as representatives of a warrior ideal that appears absurd in the present-day world.

Kata is divided into three parts: ideal fighting, everyday fighting and absurd fighting. In the piece, I break down the centrifugal movements of breakdance into sequences of isolated gestures, and combine them with ‘useful’ concepts to develop intricate battle scenarios with the ebb and flow of the ‘fighters’ on stage.”

Was Kata an opportunity for you to combine two things you love, or did something else drive it?

“After spending a long time as a breakdancer taking part in battles and performing for other choreographers, I founded ​par Terre Dance Company​ in 2005, to argue my vision of hip hop dance within the choreographic arts. I felt the need to change the image associated with hip hop dance and promote the virtuosity of its performers. I am focused on excellence in execution, but I reject any kind of academic approach and prefer to develop the individuality of each dancer through the exploration of technical constraints and game-playing.

Through choreography, I want to build symbolic spaces where it is powerful, liberating and frenzied, where dance becomes a magical ritual designed to make us take a renewed interest in the present moment of our own lives.”

How did you workshop and flesh out this original spark into a fully fledged work – from choosing dancers to the choreography to music and costumes?

“Except for Valentine Nagata-Ramos, who’s been dancing in my company since 2009, the seven other breakdancers were chosen through an audition. I knew most of them from the world of hip hop battles, though, as most of them are quite famous in that area (B-Boy Schlag and B-Boy Tonio, for instance, have both won Redbull BC-One Championships).

My choreographic methods are reflected in the breakdance lessons I’m developing at the Science Po Paris University. I start by instilling into my students an ‘animal-like’, ‘useful’ relationship to the movement, how to optimise each posture to create maximum room for manoeuvre. I then incorporate certain form limitations into the dance to refocus energy around the centrifugal force. Then the choreographic construction work starts by transposing a basic movement in different directions, ranges, heights, trajectories or energies, while integrating certain ‘obstacles’ to the movement, or composing logical progressions combining basic movements and personal ‘variants’.

Also, the contact with the floor, the relationship with the Earth is one of the factors that prompted me to practice breakdance rather than any other dance style. However, I greatly missed the contact and relationship to a partner that is intrinsic to martial arts practice. That’s why I now make it one of my main research goals as a choreographer. I have developed a series of technical exercises aimed at introducing contact into dance moves that are inspired by martial arts principles.

I created the original soundtrack in collaboration with composer and percussionist Sebastien L’été, whom I’d also worked with on the score for ​Autarcie (….)​. The music encourages the dancers to pulsate, whereas the choreography imposes a game of cues and struggles, requiring them to make jerky moves or movements at odds with the rich score. The performance is about alternating between identifying with the music and building inner rhythms in order to succumb to new influences.”

What was the most difficult aspect of creating this work?

“I suppose it was gauging how much risk-taking and freedom I would allow for in the show. I use the term ‘constraint’ a lot. I am not juxtaposing the notion of constraint against that of freedom. By setting additional constraints for my dancers, I am interacting with the workings of their dance. I bring about a change in the place of creativity: new impediments give rise to new solutions for freedom. These workings are very familiar to hip hop dancers, whose dance is based on a desire to extend themselves. They seek constantly to transcend the laws of gravity and the human body, and deceive the visual and sound perceptions of their audience.

Another fundamental principle of hip hop dance is negotiating risk; dancers always attempt to execute movements that are more difficult than the ones they have already mastered, they like to show their ‘power moves’, as if filing a patent before an expert audience. Overcoming constraints and taking risks are at the heart of the show’s construction.”

What are some of the challenges you face bringing street dance culture into the modern dance spotlight?

“I dream of being able to bridge the gap between the hip hop battle audience and audiences in the traditional choreographic fields. It’s a quest to express the feeling of freedom and pleasure that many performers are attracted to in hip hop dance, especially the ‘battle’ as a kind of ceremony during which one abandons oneself to the music and shares the dance with a group of novices.

The traditional stage setting does not always offer these sensations, and many dancers simply prefer to channel that strength into short ‘shows’ that reflect a jubilant, demonstrative vision of dance. I am seeking to reconcile the notions of freedom, pleasure, technical progression and self-transcendence peculiar to hip hop with advanced, demanding theatrical performances that question the place of human beings in the modern world. I am not setting the stage environment against the battle environment, as I believe they stand apart from, and complement each other, using the same energy but in a different context.”

“Hip hop is a sharing culture, based on cultural mix and the mixing of cultures. It came about with urbanisation being the site of mass migration and where people from very different cultures were forced to share confined social spaces. They therefore invented new customs, new distractions and new modes of expression.The essence of hip-hop culture consists in creating new forms by acquiring and experimenting with existing forms.

Are you pleased with Kata’s reception so far?

“The Australian premiere at OzAsia will be our 50th representation since the show premiered in Théâtre National de Chaillot (Paris) in 2016. Since then, we’ve toured in France and many European countries, and the reception has always been very warm. I am very happy and proud that it reaches out to everyone with different audiences ranging from younger audiences, families, contemporary dance aficionados and dancers from the hip hop nation. That’s what art should be able to do.”

What is on the horizon for par Terre/Anne Nguyen?

“I just premiered a new dance piece,​ A​ mon bel amour,​ in autumn 2019, where I decided to engage charismatic dancers who employ raw, explosive dance moves, not only from the hip-hop scene, but also from other horizons. ​À mon bel amour​ questions our perception of the individual, the couple and the collective by exploring different conceits about identity and beauty. Eight dancers, four men and four women, using moves from classical ballet, voguing, krumping, popping, wacking and contemporary dance strike poses on a runway, challenging the limits of our gaze.

Also, a few months ago, I created a piece that would be performed in seventh to 10th grade classrooms. I wrote a theatre piece about dance called ​Goku’s Trial​; it will premiere in January 2020, to a series of about 40 classroom performances. It’s a sort of a cross between hip hop and courtroom drama. We are doing rehearsals right now!

I really hope to be able to join the cast next time we come to Australia!”