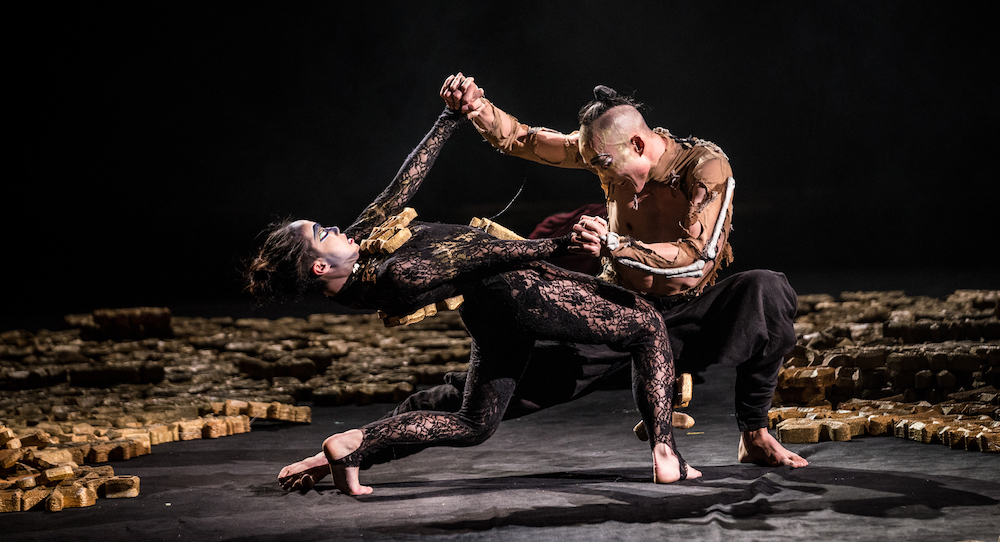 The Rite of Spring was made famous first by the collaboration between Stravinsky and Diaghilev for the Ballets Russes in 1918. Legend has it may have instigated a riot in the theatre when it premiered. In the original Rite of Spring, a young woman dances herself to death as a sacrifice for future harvests. Rite is arguably the most important work in the 20th century Western dance canon. It has been reinterpreted by many choreographers, most famously perhaps by Pina Bausch.

Yang Liping Contemporary Dance is a contemporary dance company based in China. Liping proposes to reinterpret the Rite of Spring with Eastern aesthetics, wisdom and philosophy. It is interesting conceptually but less interesting in delivery.

Liping draws on the symbology, ritual dances, iconography and paintings from Buddhist mythology in her retelling of the Rite of Spring. The coded language of this mythology remains largely mysterious to the Western audience. Each hand gesture has meanings much like the coded hand gestures of classical ballet or Indian dance.

The design by Tim Yip features an enormous Tibetan singing bowl at the rear of the stage, which dancers can move upon. The floor is covered with Chinese language characters. These are used throughout the performance as a mutable object; they are burdens carried by monks, imprinted on bodies, and adorn other bodies.

The sound score begins with compositions by Chinese composer Xuntian He. Traditional instruments are worked in an ambient soundscape, that is beautifully meditative. This ruptures with the introduction of Stravinsky’s score, and the juxtaposition of the Eastern mythological representations with Stravinsky’s Western modernism is not a comfortable mix.

Yiping’s Rite of Spring feels created with an eye for spectacle, and it certainly contains spectacle. It feels that the images created are most important to Yiping, at the expense of the experiential condition of the dancers and their movements. This leaves us with a superficial experience.